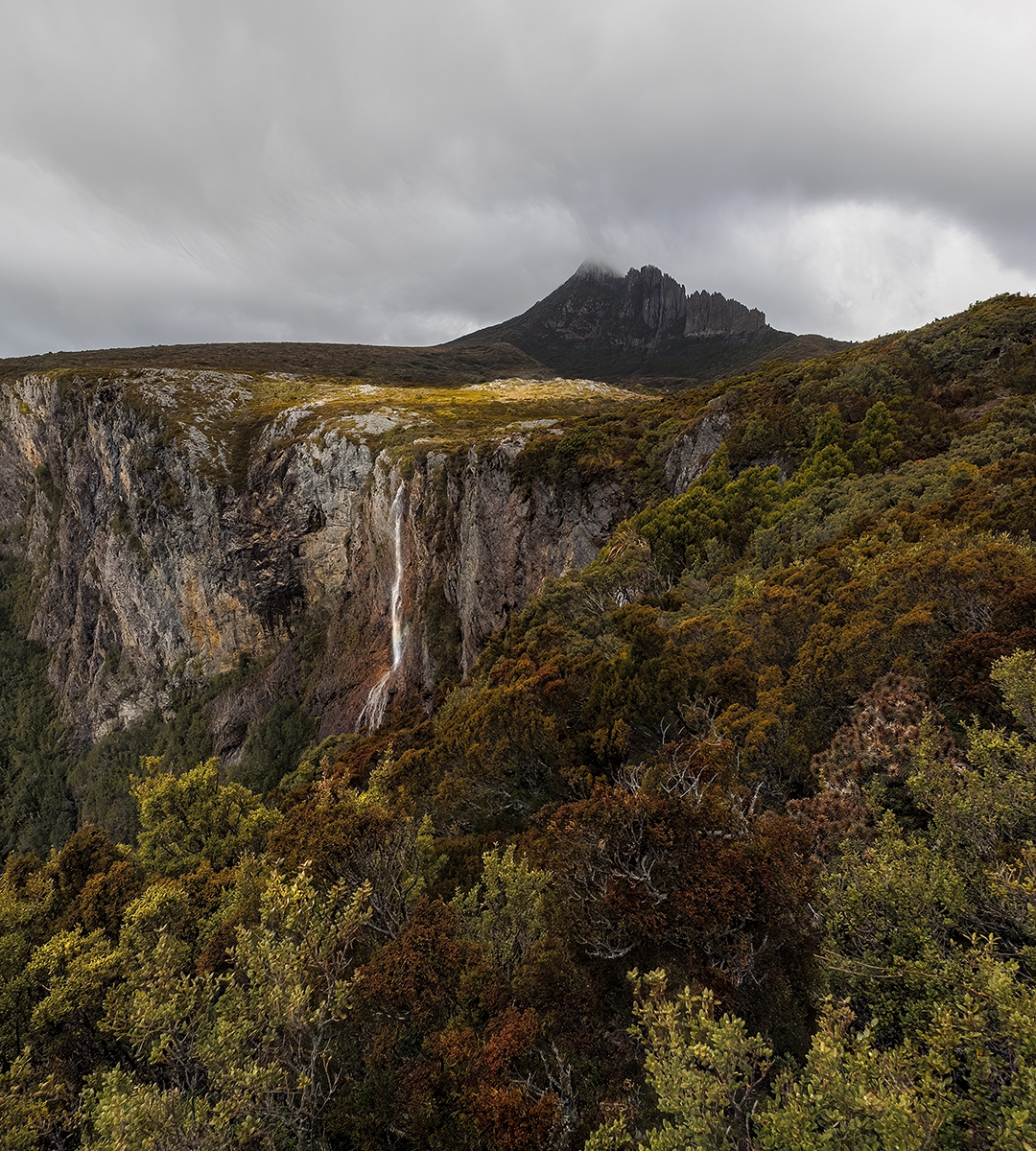 Angel Falls, near Mt Sarah Jane, are best seen after good rain. I decided last Wednesday was my day. The weather map predicted that Tuesday would be cloudy with maybe a little rain, Wednesday perfect, and Thursday and Friday back to rain.

Living in the north, there is no way I can drive down on the day I want to see the waterfall. And, if I am driving down the day before, then, it makes sense to lug my tent up the mountain and sleep there, all ready in position for the morning’s splendour, and enjoy sunset and sunrise from on high. Maybe I can even get in some astro photography too. That would be great.
Tuesday was, as predicted, cloudy, but it wasn’t raining. I drove my dog to Hobart, gave her a walk, had lunch and then continued on to the South West. I was carrying a tripod and three days’ worth of food and gear, just in case it was so lovely that I wanted two sunsets up there. This made my pack rather heavy, so I was thrilled to only take 3 hrs 15 to be breasting the top of the climb.

Bam. The wind punched me in the face. Hey; this wasn’t predicted! The clouds got darker. The wind was gale force up there so I dumped my pack and spent an hour searching for the perfect spot, which had shelter from the blast and a view. It didn’t exist. In fact, I couldn’t find anything particularly tolerable, so chose a spot that had access to water and a tiny bit of shelter by being in a bit of a hollow. Anyway, as there was no view to be had, that didn’t matter any more. So much for the sunset and astro photography.

I tried to pitch the tent, but the wind kept ripping out the parts I had attempted to secure. I finally got it up, tightened the guys and crawled in to get out of the battering. It was such a relief. I wondered if I was going to get a match lit to cook with, but in between gusts I grabbed my chance. Whew. I was hungry.

That night I did not get much sleep. The gusts were loud and destructive. They ripped a peg out so my tent started flapping badly. I went out to re-place it, and added my snow pegs that I’d also brought up for extra stability and anchorage. I started making plans for what I would do should the tent blow down. I know I am not capable of repairing a tent in a gale without help. Plan B was to abandon the collapsed, bucking tent and begin back down the mountain by torchlight, leaving everything else behind. I also know from experience that you can’t find anything if the wind collapses your tent, as each gust just throws everything around. So, I donned what I would need to wear if escaping down the mountain. I even wore my torch to bed so I could find it with no searching.

The gusts became less damaging at about 2 a.m., and I was able to get in a few hours sleep before waking at first light, which had very little light to offer. I could not even see my mountain, the mist was so thick and the clouds so grey. Where was this perfect sunshine I had been offered? The wind was still uninvitingly strong. Time to doze some more. At 7 a.m., I decided I might as well eat breakfast, but I was not going out in that. It started raining. I ate. By 8 a.m, I decided I might as well get out and do what I had come to do. The day was not in any hurry to be nice to me.

So, off I set into the wind and clouds. Some photo this would be. It was hard to even hold the camera steady. Lucky I had my tripod. The light did make the colours very beautiful, and I got used to the wind. Although this is my third time up there, this is the first time I have had the liberty to properly gaze at Sarah Jane. She is actually very beautiful. When I climbed her in 2015, I neither saw her nor the view. When I passed by in 2016, my focus was on our goal of Lots Wife. This time I gave her the attention she deserves.

I had all day and was in no hurry. I just ambled along, enjoying myself now I was getting used to the wind and the gusts were not so bad. Navigation to my goal was not challenging. I popped out of the scrub just above the spout. The spot does not give a brilliant view of the whole waterfall, however, and I could see where I needed to be to get the angle I wanted. It was maybe 80 metres away.
I took over half an hour to reach this spot, as the slope is severe and the penalty for slipping over the edge, infinite. The bush was excessively thick. I couldn’t even see where the edge was and was not in a mood for experimenting. I have seen people fall many metres by taking an extra step that they thought was onto ground but it was just greenery that looked like ground and gave way beneath them. I would fall a great deal more than “many metres”.

So, what did I do? How did I get a view, especially considering my big height disadvantage? I climbed a tree, of course. The photos you see are taken by me up a tree, hanging on by one hand and attempting to hold the camera still in the continuing gale with the other.  I was many metres above the ground, so my tripod was to no avail.
Back at the tent, I had an early lunch, still waiting for the day to improve. I packed up, still waiting. There was no point in staying an extra night, and, besides, the wind meant the next night might be just as sleepless as the previous, so down I went, back to the car, real food, my dog and my Hobart family. Gussy and I had a lovely night reading together and doing wordle and square word. It was so soothing to have warmth, shelter and loving company. I seemed to eat rather a lot of ice cream.
Please note: The bucking tent I have experienced is not my Hilleberg. It was an Exped Extrem. I ordered my Hilleberg the next day, but the memory of that bucking tent will never leave me.