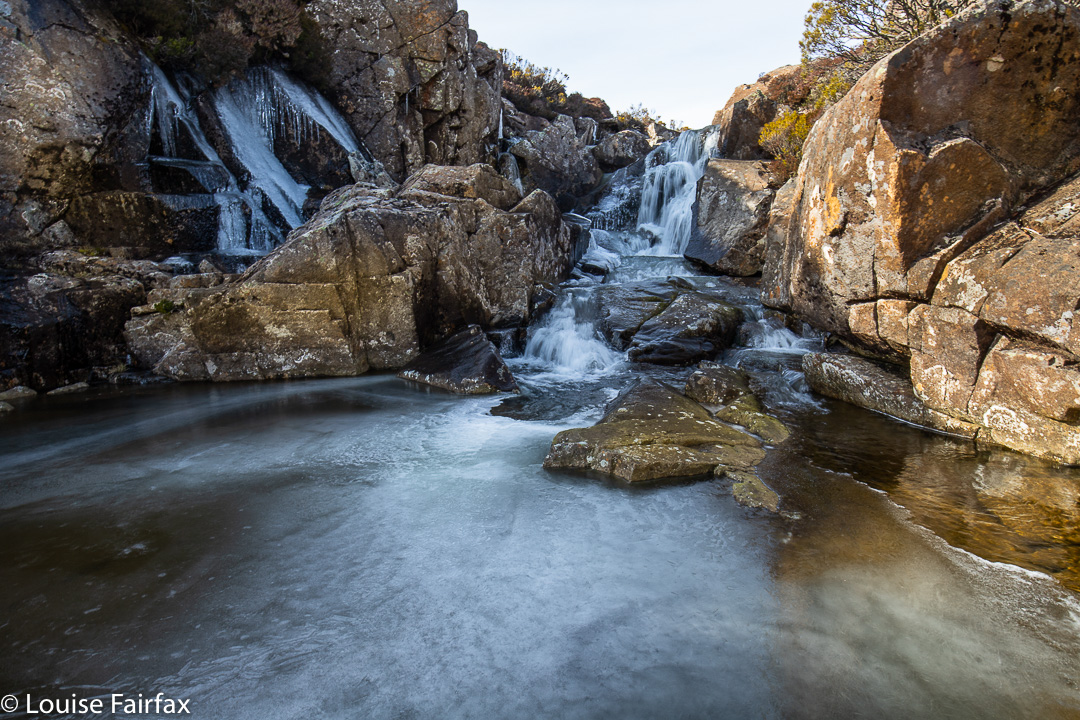 From the first moment I saw the position of Ford Falls on the map, I knew I wanted to “bag” them (as the saying goes) in winter, with snow and ice all around. Today I had my wish.

Now, I should be all set up for this, as I have an AWD and a set of chains, but putting on chains had always been Bruce’s job, so I felt a little insecure doing this alone, and prancing around on icy rocks is also better done in pairs than solo, so I contacted my friend Steve, who said he’d love to come. It was on.
The trip up was uneventful; the ranger happily let us through seeing’s we had chains on board, and up I drove. It was a balmy minus one at this stage.
Up on top, Jacob’s Ladder neatly behind us for a while, we searched for a spot from which we could attack these falls. Near the lookout, scoparia bushes were in thick armies. We got back in the car and went a bit further, nearer to the path up Legges Tor. There was a suitable spot to abandon the car, so we did so and tried again. No route yelled at us, but we chose a lead I liked the look of and followed it. Ha ha. After maybe ten steps there was a gap in the snow, and underneath was the path I had been searching for.

Elated, we followed it until it dumped us at a pile of rocks, from which we were then left to do a kind of monkey-cum-crab dance across the rocks until we were where we wanted to be, photographically speaking. Unfortunately, Steve slipped on the ice and his hand hurt for the rest of the excursion, but no limbs got broken. I had spikes and spiders for us both, but neither of us bothered to put them on.
We stayed a while, as it was so beautiful there amongst the ice crystals and shining glassy stalactites. You could have skated on the ice below the falls (if you knew how) it was so thick.

The path, when not buried in snow, is probably clearly visible from the “car park” of its origins. This spot is not official, but there is probably room for two or three cars. The ground opposite has also been cleared a tiny bit. It’s maybe 2/3 rds’ of the way along between the lookout and the Legges Tor path. The waterfall is higher than shown on the map, more at the start of where the gorge begins.
I hope that helps. For us, it was time to go and visit Joy Falls as well before lunch. These are also on the slopes of Lomond, but a further drive around than I was expecting. We did fit in both falls before having lunch by the car in the forest and setting out for home.