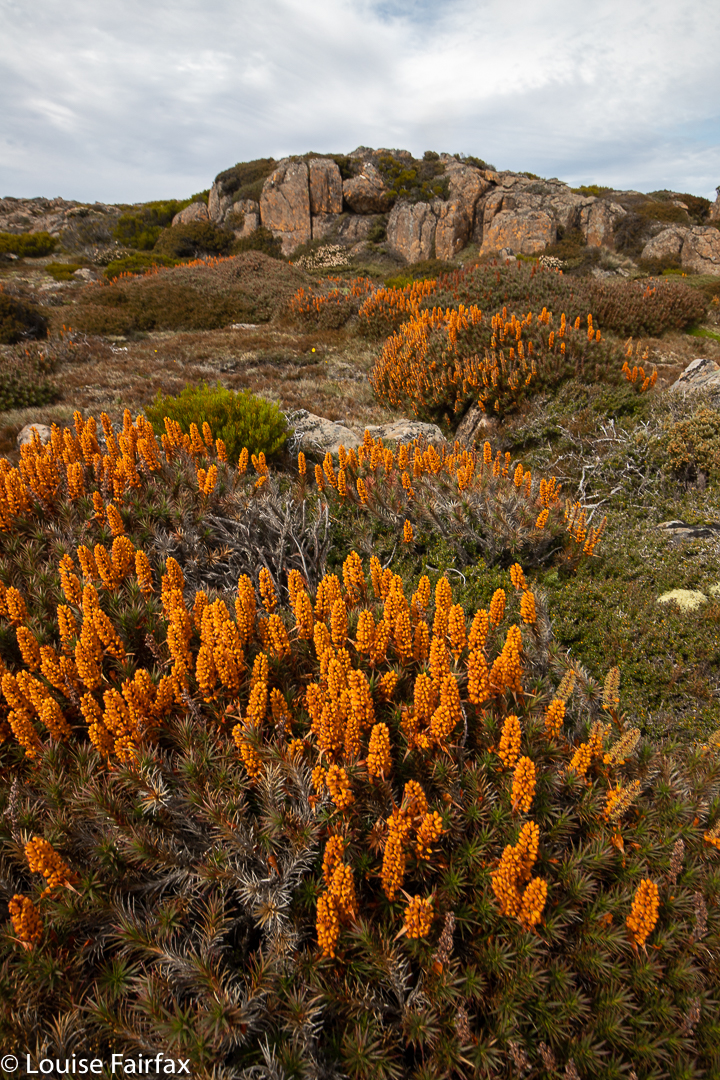 When we first bought our home and looked out the window, we saw a mountain that everyone calls Ben Lomond. I can see it clearly enough from my bed to know whether there’s any snow, or whether it’s smothered in clouds today, which is kind of handy. Years later, I learned that ‘Ben Lomond’ refers to the whole high plateau; the actual highest point on that overall rather flat but high massif – indeed, the second highest point in all Tasmania – is called Legges Tor, a lump higher than the rest perched above the small skiing area.

To stand atop Legges Tor in summer, is to survey a high, windswept plain, rocky, almost featureless in its barren expanse of broken dolerite. Other very high points are only just visible in the distance, and their shapes do not demand your attention. This is very different from being, say, in the dramatic Western Arthurs with its jagged skyline, and yet, like the moors in England, the area offers its own kind of wild beauty. With your hair blowing in your face, and a chill in the air, you can see for great distances, and the emptiness – the sheer volume of negative space – somehow enlivens your senses and makes you feel fresh and refreshed. Dolerite rocks with their patterns of lichen and tough little alpine bushes earn your respect for their ability to inhabit this inhospitable  zone. It is not crowded up there, to put it mildly, adding to the sense of desolation that is characteristic of being there: you feel tiny in the presence of such enormity, which leads to a feeling of the sublime. If you want a ‘Wuthering Heights’ experience, then this is as near as you can get. For me, the only other place that feels the same is Iceland.

There are heaps of lumps and bumps to climb up here, but in this blog, I will concentrate on the ones I have climbed in the last eight days, namely, Hamilton Crags, Stonjeks Lookout, Whymper Crags, Markham Heights and the Plains of Heaven.

Hamilton Crags pose little mystery for me, as I have ceased to tally the number of times I have visited the top (not that I’m sick of it). Summitting yet again was just something to be done on the way to Stonjeks Lookout. Now, this WAS fun. What an impressive-looking bunch of congregated rocks, pointing to the sky and offering their challenge.

It seems that Tony Stonjek, after whom they are named, was also oriented to reach for the sky. He was a champion skier who had represented the Czech Republic (then called Czechoslovakia), and who arrived in Australia as a refugee after the war. As a child, he skied to school, skied down the 150 steps of his church, and skied across the Polish border to pinch wood. He won so many skiing titles in Tasmania that most people lost count. The rocks have added spice if you familiarise yourself with his history. They are demanding and fun.
The third item on that day’s agenda was Whymper Crags, which are just further along the spur than Hamilton, and which, at their highest point, offer commanding views to the Jacobs Ladder approach to the massif, and to the cliffs that form the lower part of Markham Heights. One sees Whymper Crags every time one drives in, so it’s good to have at last climbed up there.

One sees a lot of Markham Heights, too, and yet I have never visited them. I decided that today was the day. I didn’t have a clue how long it would take. All would depend on how rough it was along the tops, and whether the scoparia would pose a problem on the approach.

Just in case the scoparia was nasty, I decided to use the Legges Tor track to gain the height I needed, and then hive off right when the opportunity looked good for a lead in the direction of Markham. There seemed to be a line of weakness in the marshalled defences of the scoparia slightly before the highest part of the broad spur heading in its direction, so I took it, figuring if I was wrong, I could climb higher later. Markham Heights did not lie on this particular spur: it was just a kind of feeder.

There were appealing little lanes of Pineapple grass and other low-lying alpine vegetation so I could make handy forward progress: handy, but not speedy. Predictable at the height of 1500 ms, the wind was quite strong (this is February, but I had two Icebreaker layers, two coats and two hoods over my head), and it kept blowing my hair into my eyes. One had to search for the leads: they didn’t yell their welcome at me, so I zigged and zagged about the place, avoiding prickles, and eventually found myself reaching the summit one hour after leaving the car.

I was enjoying being up there, and so also visited the next lump along to the west, which is nameless, but which stands at 1534 ms asl. It had a cairn that had called me over. For my return route, I decided to use the spur that ran parallel to the valley I had come by. What a terrific fluke of a decision that was. This area is magic. The scoparia had been surprisingly good for this time of year, but on that spur, it was amazing, especially with the added colour from the flowing bellendena montana. Daisies and other flowers were also out. The walking was even easy, as the scoparia was a little thinner on the ground, and there were huge cushion plants as well. As usual, the were countless mounds of wombat poo but no wombats. Three wallabies hopped away, but that was all.

This spur had a cairn at its highest point, so I went and touched it. It was just the world, the wind and me … and all those flowers. What a beautiful place. When I got home and stared more closely at my map, I saw that it was called Plains of Heaven. What a prefect name. I wonder what it looks like when the scoparia bushes are actually in season rather than just popping in here and there for a late show. I’ll let you know eleven months from now.