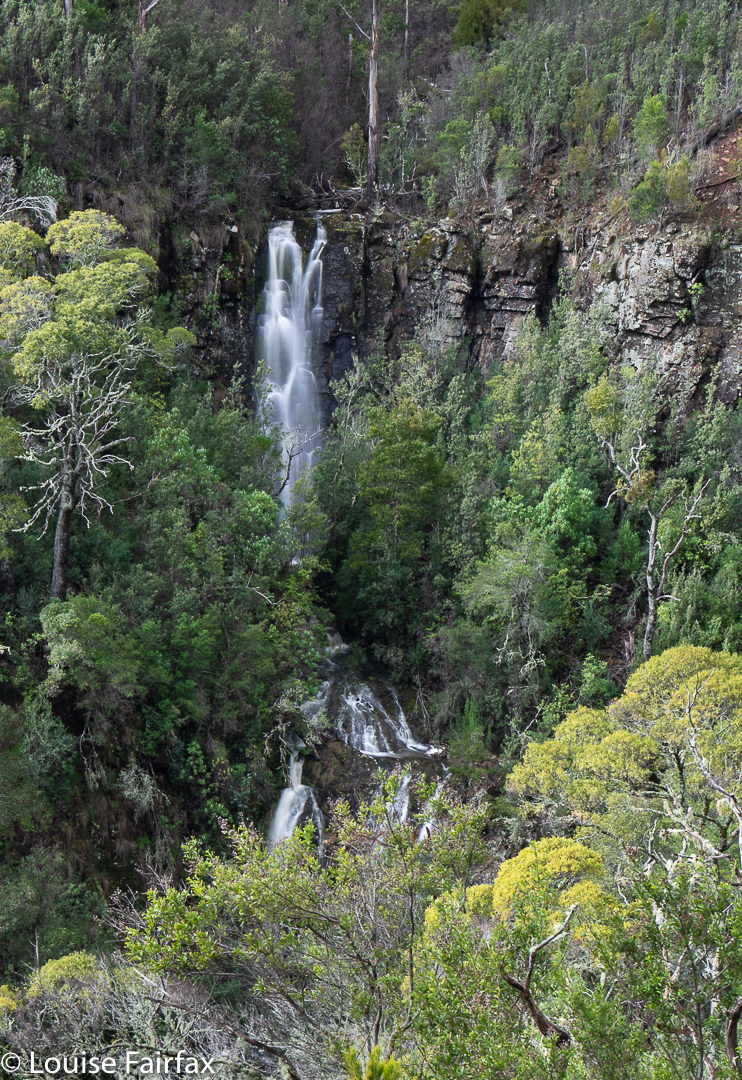 When map staring around the St Marys region, my eyes found two interesting little blue lines that needed exploring: one had a name, viz. Webber Falls; the other was on a tributary nearby, and was south of the named ones, so calling it Webber Falls South seemed appropriate. The “featured image” at the start of this article is a front-on shot of the actual Webber Falls, with three tiers. As you can see, the river kind of curls between tiers, so you need to be high to get all three in a shot.

I had heard they were extremely difficult to reach (my friends failing to do so), so set out without a great deal of confidence. I can now ascertain that the saplings that hug the creek area are very close to each other, which is easily overcome if you have my stature. Maybe it put my other, less-skinny friends off. I can also confirm that the ground is VERY steep, but, worse than that, it is unstable. I can count on one hand the number of times I have sent a rock flying, but these soccerball-sized rocks were in soil that was not well-glued, and it gave way very easily. The drops were humungous. I was a nervous wreck by the time I got to my chosen position for photographing the southern falls (having come via the actual falls). You couldn’t assume that the ground would stay put if you trod on it. I didn’t even put any trust in living trees, which are normally pretty reliable.

As if to prove my point, while I was slightly altering my camera’s orientation, my filter holder detached itself from its ring and dived overboard. I never heard it land. It had within its grasp my beloved CPL, as well as my much-used Little Stopper. So little did I trust the terra non firma on which I was crouched that I didn’t even dare lean out to see if it had found a shelf. I sort of tried around the side, but even if I had just had the displeasure of watching $1000 do a fancy dive, my life is worth more than that, so I sobbed at the extravagantly expensive but very brief show, but called it quits.

I was not in a good mood driving home. Not only had I wasted a huge amount of money, but I was also now without my playtoys until new reinforcements can arrive. Waterfalls are flowing, and I don’t have what I need to make best use of it. But, hey, this is the person whose husband died in the wilderness. I am alive; my other family members are safe at home; my dog is alive. Much worse things can happen than watching your equipment dive over a cliff. Life and relationships are worth more than money or toys.