Dawn on the final day
I am a person haunted by images, and the names above now evoke a series of wonderful mental pictures. They also connote smells of lemon scented boronia and agastachys odorata, and scenes of our group of hot, tired walkers trying to force a way through the bushy wall that confronted us as we climbed to more picturesque regions.
My story will begin with the first night, at Frog Flats, where we could see our destination up ahead. I had not actually wanted to camp here, but was somewhat placated by the gilded button grass and the numerous incandescent candelabras of bellendena montana, set aglow by the sinking sun. 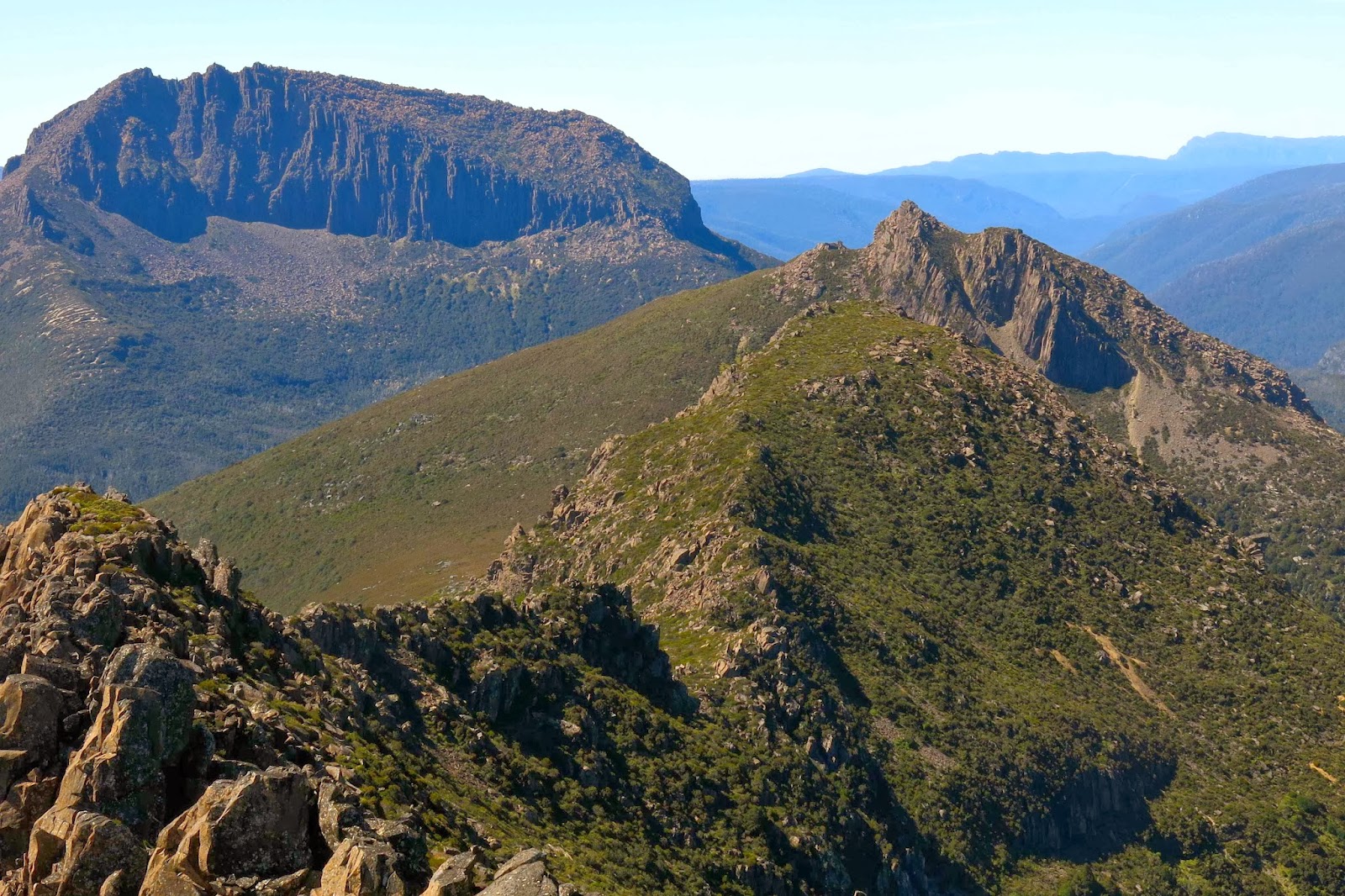 Pelion West from Perrins Bluff
The trip from Frog Flats to Leonards Tarn is one of those “end justifies the means” journeys. The lower scrub was thick. There was a brief respite in some rainforest, and then the bush got even thicker. It took us three solid hours of shoving to get there, plus another hour spent in waiting, decision making, eating etc to bring the total to four. On several occasions I got spectacularly, almost irretrievably wedged between saplings that just wouldn’t budge despite my best attempts. They’d bent nicely for the five guys with me, but would not yield to my tiny frame. I decided that if I had been doing this solo, I would have died a lonely death by starvation or dehydration, permanently stuck. Maybe like Pooh Bear, clamped in the hole of Rabbit’s entrance after indulging in too much honey, I would have eventually thinned down enough to allow a weak escape. 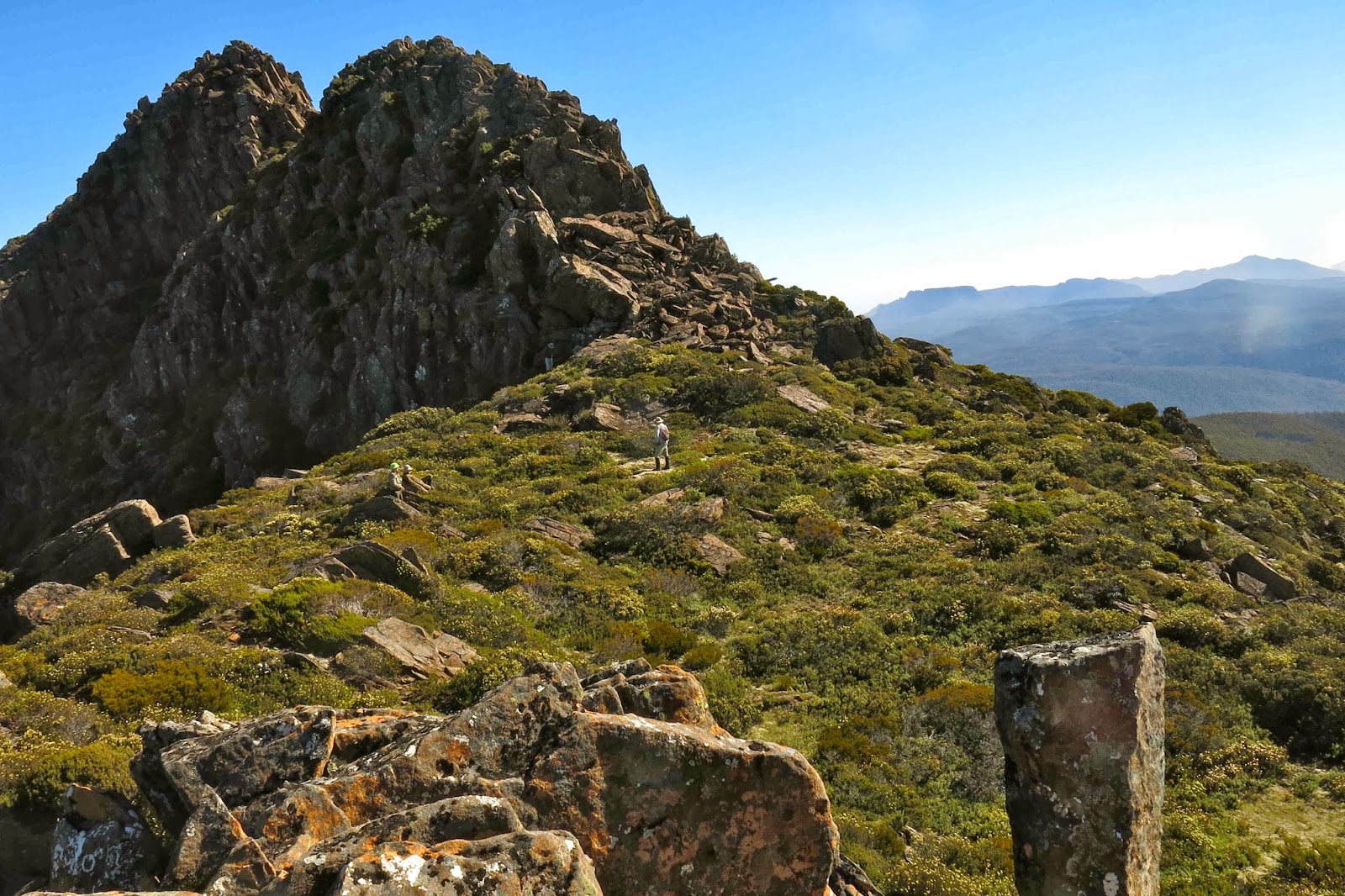 Perrin’s spine from one of its many saddles
From Leonards Tarn onwards, things got better with each passing moment, (almost) justifying the scratchy approach. We quickly gained height and views as we skirted around Achilles to the left and climbed onto the Achilles-Perrins saddle with its picturesque tarns – a perfect camping spot.
From there we stayed to the right of the mountain in the scrub (nothing compared to the battle-fire fight of the morning) until a saddle about ten minutes from the end, when we crossed to the other side of the ridge (SE), walked along the shelf there and popped up an easy climb at the last minute to the summit.
I loved not only the extensive views in all directions of ridge upon ridge of steely mountains, many of which were now old friends, but also the impressive dragon spine of the Bluff that led towards Pelion West and Achilles. It was even better than the similar tail of Mt Pearse.

Perkins Bluff from half way up Achilles
Things got even better! On the way back, three buddies and I decided to also ascend Achilles as part of this day’s takings. We climbed up the first major landslide chute on offer after the tarns in the saddle, tried a bit of landscape rearranging / boulder fire, and were, fortunately all still alive, on the top pretty quickly. By now the sun was starting to end its course for the day, and the mountains had that alluring misty essence to them, with others lit by brilliant contrast of dark, well defined shadows set against aurated protuberances. Perrins was at just the right angle to catch these cooperative rays. I didn’t want to try to emulate Cyclops throwing boulders at people on the way down, so cast a vote for descending on the other side, in the bushes. I really enjoyed the fast plunge down, basically making a bee line for our tents at the tarn in a long slippery slide that you’d pay a fortune to do at a commercial fun park. Layer upon layer of misty mountains as seen from Achilles
To cap off a perfect day, the setting sun burned the dolerite columns of Pelion West, turning them, and their reflections in the tarn, red. That night, as with the previous one, I chose to leave the tent flap open to see the view better. Once again I was too warm to sleep, so watched the nearly full moon on its course above Pelion West and then Achilles. It sank behind the latter around 2 a.m. 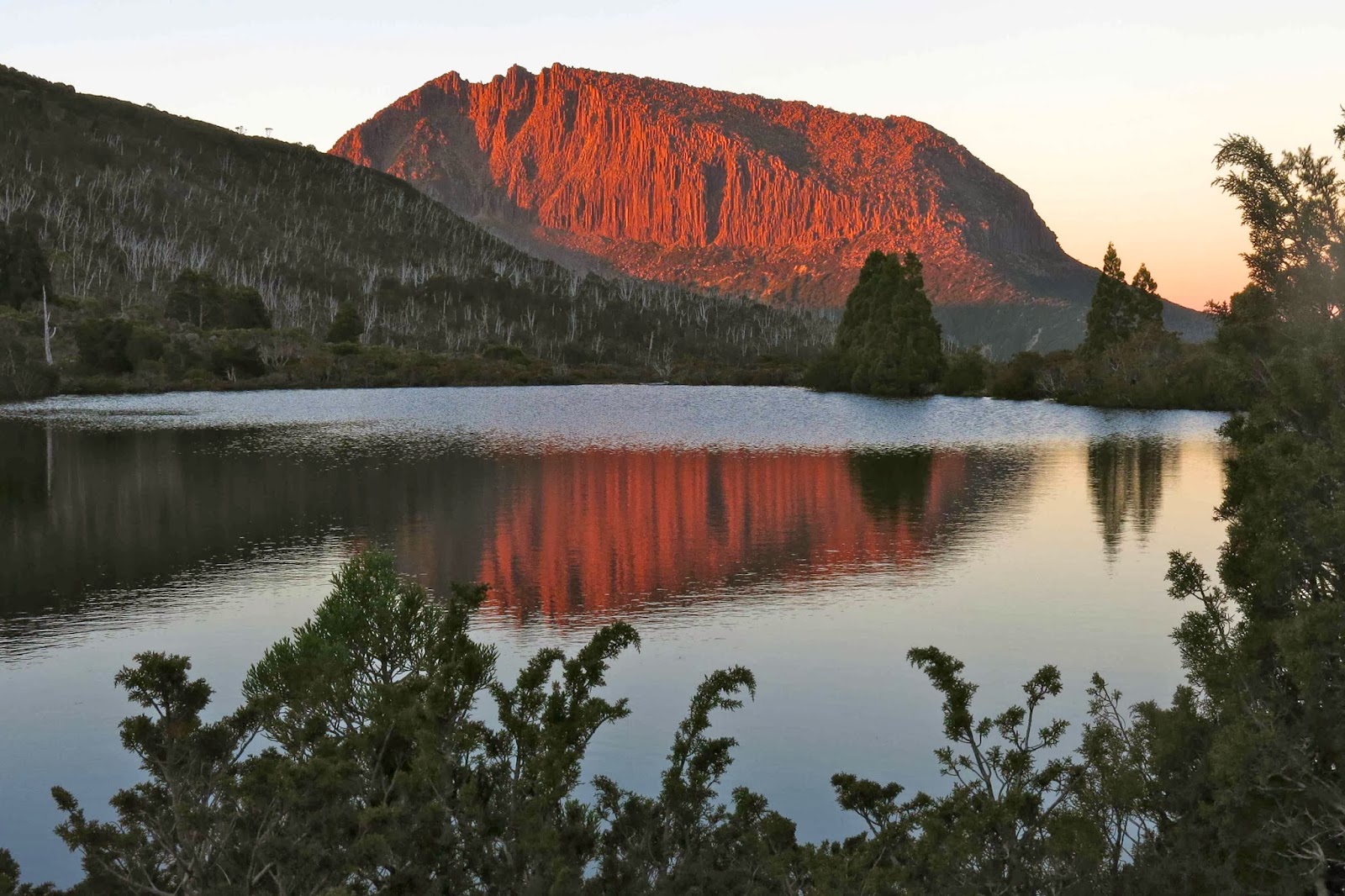 Pelion West from my tent at Leonard’s tarn
The next morning, the same buddies (John, David and Brian) and I made our way up Thetis, heading across through scrub to a patch of fagus, and then moving like cats on all fours up the boulder chute until we hit a brief tricky patch that needed more care (I swtched from cat to orangutang), and in no time we were on top of the plateau, where there were tarns in a beautiful grassy valley leading to a very minor saddle on the left, and the summit was just up slightly, a bit further on (still to the left keeping direction) from there.
I was thrilled to have an extra peak, and an Abel at that, under my belt, and enjoyed the view, but I think on this occasion the fun of the climb outclassed the scenery at the top – but then, I have been fearfully spoiled over these summer holidays. 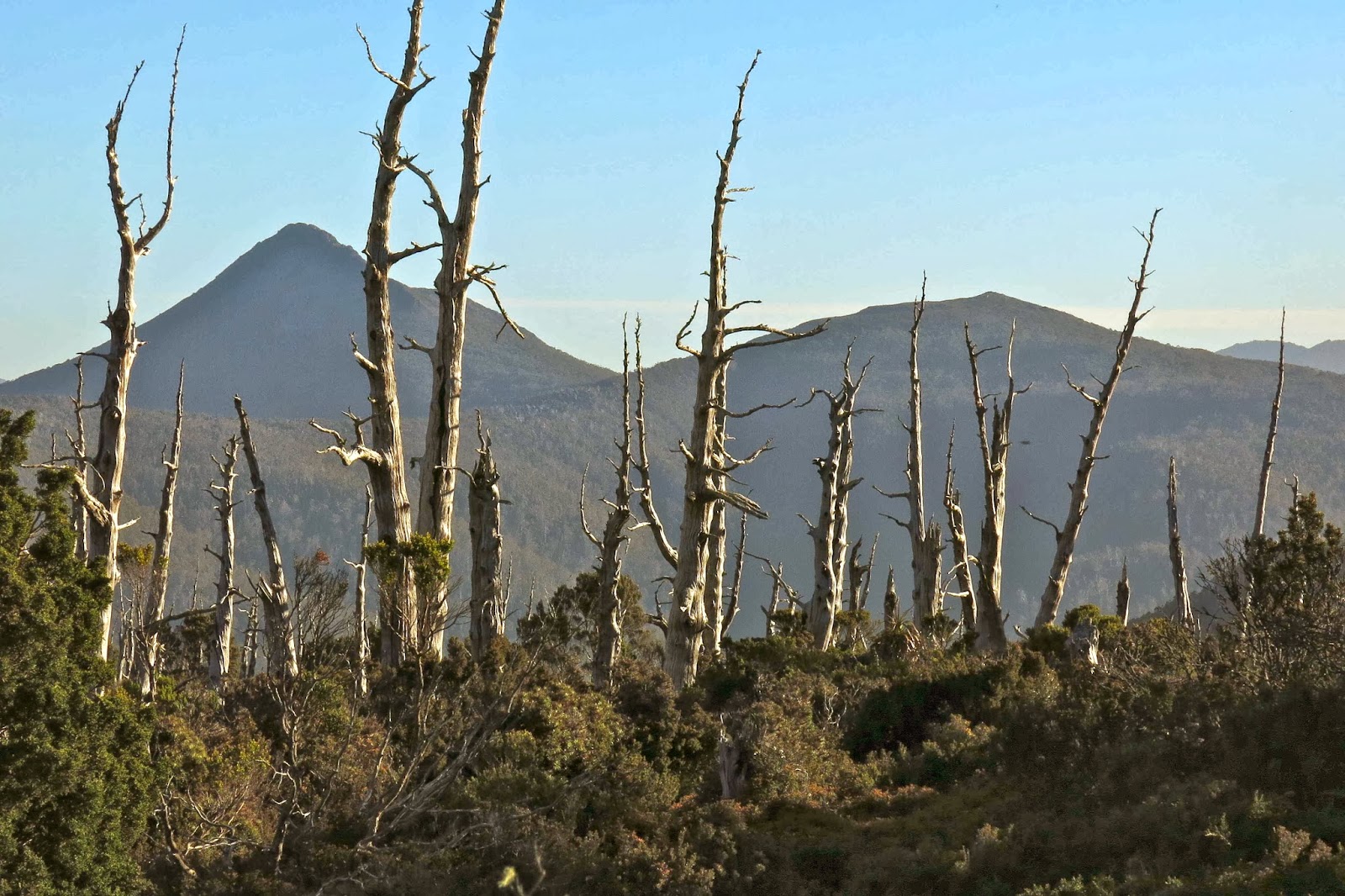 View from Leonards Tarn
After that summit view, it was downhill all the way, physicaly and metaphorically, as we turned our backs on the vista, enjoyed the bouldery descent and slid through the scrub at the end back to Leonard’s tarn, endured the thickety fight down to Frog Flat, and joined the Overlanders on the last trudge in to Pelion Hut, where we set up camp. One of the views from Thetis

I thought in anticipation that this would be unpleasant and crowded, but I actually had a wonderful time, chatting on the verandah until late into the night with a very interesting bunch of people, having had laughs and good times with my own group up where we cooked dinner first. The design of that hut seems to lend itself to socialising out on the verandah watching the changing light on Oakleigh. I have decided I love it. Diplarrana moraea
The final morning was perfect. As usual I was up before sunrise, and was treated to a mesmerising pastel Alpenglow behind Barn Bluff and Mt Oakleigh while mist mooched around the trees below. Dawn on the Pelion Plains
Full of the joy of the dawn, I sped my way along the Arm River track, delighting in the luminated pink and cream richea scoparia along the way, the filigree, diamond studded spider webs and the large number of wallabies and paddymelons that hopped past me as I headed with purpose towards my double shot cappuccinos at Mole Creek. I needed them plus full blast, deafening music and full voiced singing to keep me awake all the way home where I arrived in time for lunch.