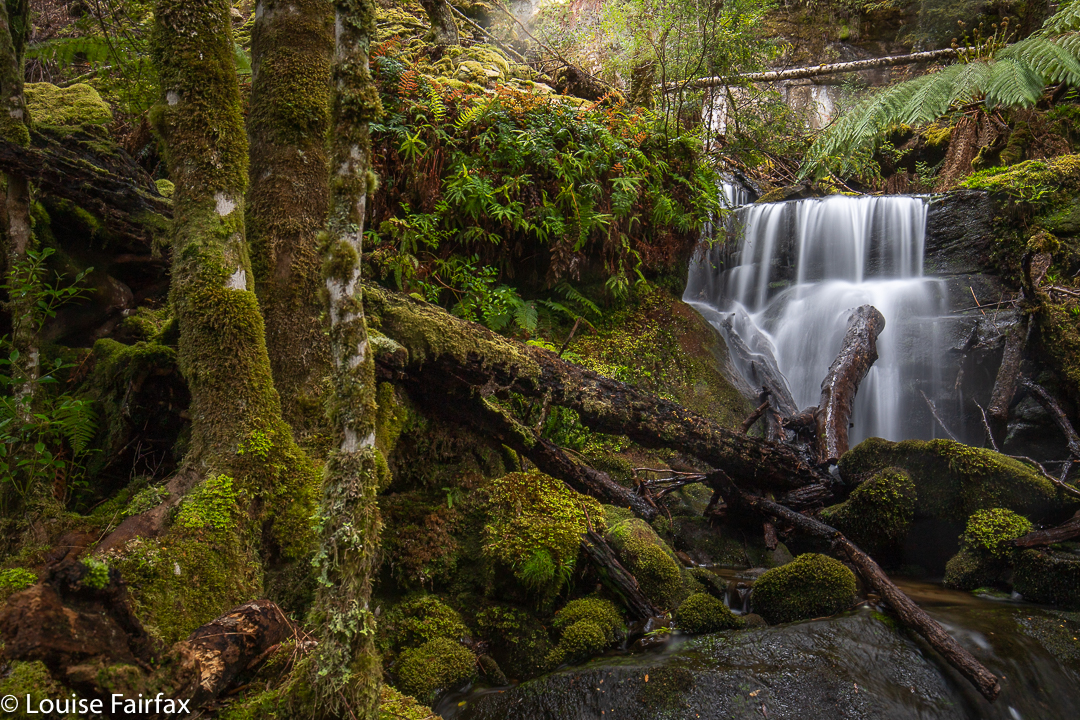 I am not normally an admirer of fat bellies, but the bulging belly of Mt Olympus is an expanse of great glory. In the folds of lurid green rainforest, with rich brown and orange rotting wood, you can find weeping waterfalls in abundance. I noticed how especially glorious everything was looking on my way back from our Nereus trip last week, when we got snowed out of our deadlines. Because my mission regarding Nereus was the climb, I only had my phone with me, and phone-photos of waterfalls do NOT do it for me. When I look at a waterfall with my naked eye, my brain sees glorious lines of flow, gossamer threads adorning basal rocks. The phone gives me frozen, often blown-out droplets or odd streaks and blotches that fail to give any indication of the magic that attracted me in the first place. I needed to come back with a real camera to do the area justice. Saturday was the day. I had time to get home, have a tiny bit of rest, attend to my animals and plants, try to patch my very damaged and infected feet and return. My boots were still sopping, and, as it was constantly wet feet that had caused the foot damage from Thursday, I had bandaged my wounds and wore a different pair of boots. I like to have 3 pairs of boots in use at once, so that two pairs can be drying out slowly and I still have something to wear. It’s not good for the leather to force the issue of drying. On the day I had chosen, the forecast was for rain all day – hoorah; that’s actually why I chose that day – and I set out on the ferry in the middle of a little deluge. By the time I alighted, it was only scattering tiny droplets, most of which the canopy absorbed. You guessed it; the sun came out by the time I had all my gear ready for shooting some time later. That said, I never had to wait more than a few minutes for the sun to hide again, and the heavier falls of rain occurred at times when I was ready to move on … mostly. Other times I had to contend with rain while I was shooting, but it wasn’t too bad. After the first series of falls, it was raining quite heavily, so I decided it would be good to drop down to Echo Point Hut and have some food inside in the dry before moving on. There were five of us sheltering and snacking in there, three of whom were were landscape photographers. I had fun meeting them (they were from VIC and SA, and were adoring the forest), and stayed far too long considering my goals, but, oh well, that’s the way it was. It was a very sociable day, as, at the end, when I arrived at the lodge just before kitchen closure, two lovely people invited me to join them at their table, and we had a fun time chatting while I waited for, and then ate, my dinner. Even on the ferry I’d had a great time chatting, as several people on board recognised me, waving enthusiastically as I hopped over the gunnel, so, after I explained to the driver that I was not going to “chuck” my bag containing several thousand dollars worth of glass in the corner, we talked the whole way. I have decided that people who are prepared to get out and climb mountains or explore forests on a day forecast to be sodden all day, must be very nice. The rain is a kind of sieve. There are no routes for this blog. I didn’t track anything. I just wandered and shot where I found beauty. The falls have names in my files for my own records to distinguish them from one another, but I have not named them here; they are not official. At the official level, these are unnamed and unmapped falls on unnamed and unmapped creeks. Perhaps their shy obscurity is part of their allure.