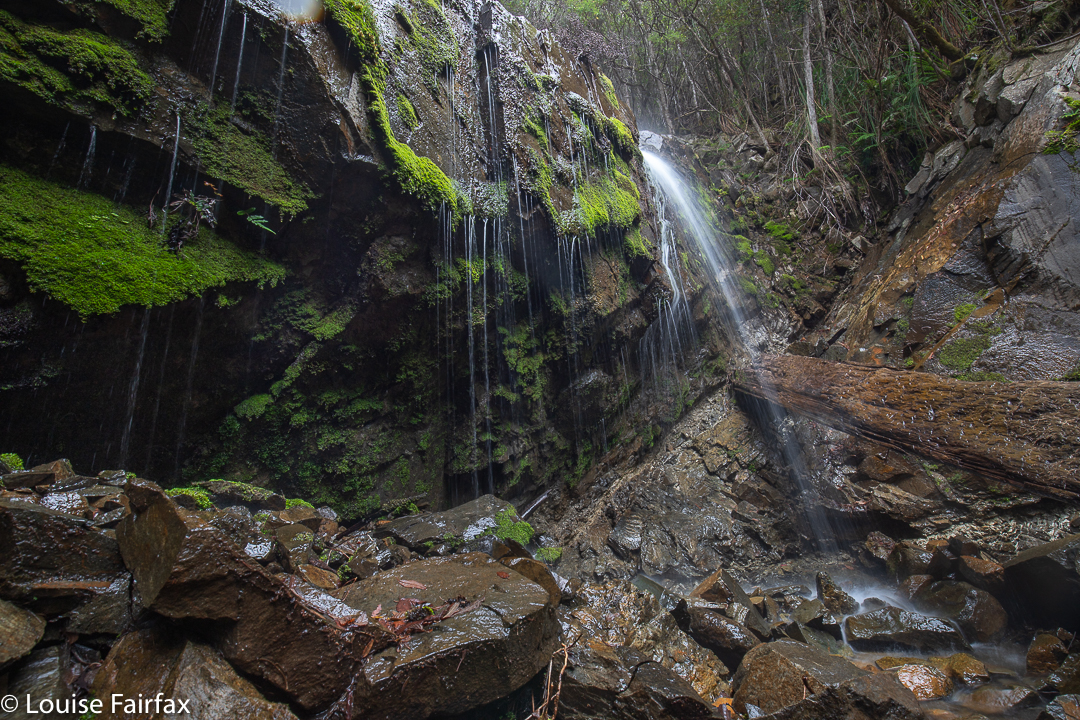 The descent to, and then climb back out from, Bear Falls is exceptionally steep. The first 700 ms are flat, on a fire trail (Mt Wellington), after which you dive head first down a landslide (which I presume is the shocking 1872 “Glenorchy landslide”). In this plummet, you drop 440 ms in about a kilometre. That is whopping!!! Not only is it steep, but also, much of it is of dubious stability, that being the nature of a landslide. I personally treat landslide rocks with a great deal of respect. Sometimes the whole land can feel like it’s running away from you.

As a result, I took far longer to descend (1 hr 38 mins) than I took to come back up again (1 hr 20 mins). I love climbing, and if you stumble going up, you don’t do nearly as much damage, so I feel free to exercise less care. On the way down, I tested every single rock before committing to it, and had three points of contact the whole way. Coming back up, I climbed like a bear on all fours, as required by the slope, and had fun and went as fast as I wished, which was actually pretty fast, as I was under time pressure: I wanted to get changed and have lunch before picking Abby up from Kindy. Relaxing before the onslaught of an exhausted four-year-old just released from the rigours of newly-imposed educational demands was also appealing. A tantrum is far more demanding than a steep slope.
Bear Falls are not marked on the map, let alone named. The tributary they are on is also not named – or not up that high, before it has amassed all its tributaries to become a rivulet. There are two mapped, and many unmapped tributaries. As most people don’t like ascending at the rate I do, I would allow far more time for this excursion, should you attempt it, than I did. I was squeezing it in between other demands on my life.