Hazards Traverse March 2014
In a former life, when I was an athlete and orienteer, I used to run reps up Mt Amos. I would sit on the summit at the end and gaze at the other Hazard mountains and want to go up them too – obviously not running as I did up Amos, as there was no track, but I wanted to get to know those mountains as well as the one I was on. Then, one day I heard the magical words “Hazards’ Traverse” and they captured my imagination immediately. Friends talked about doing it, and I was insanely jealous: what a fantastic thing to undertake. At last an opportunity for me to do it too came up, as the name that held so much allure appeared on the HWC programme. I phoned the leader, David, and all was right to go. He talked about ropes and slippery slopes – I know all too well what granite is like in the wet – but that just served to excite me more. Ropes? Fantastic! A real climb. I just couldn’t wait for the appointed day. 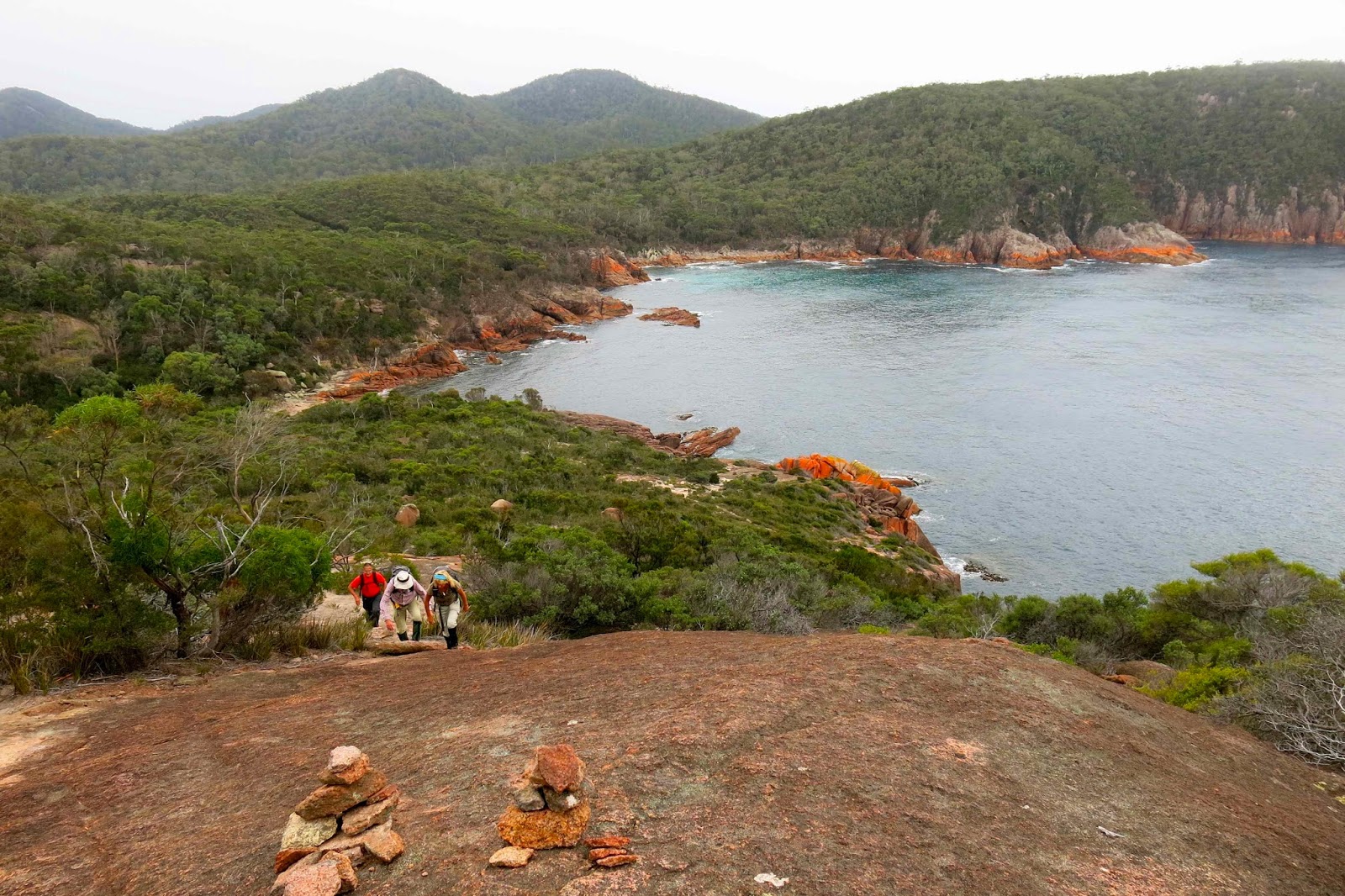 Under way at last, climbing Mt Parsons. I was very excited!
It came, along with inclement weather. Knowing how treacherous granite can be in the rain, I was thrilled that we were at least going to give it a go, but was well aware that we may not complete it if things got too hairy. Granite operates like well-polished marble when wet, and not even good boots can prevent you sliding. 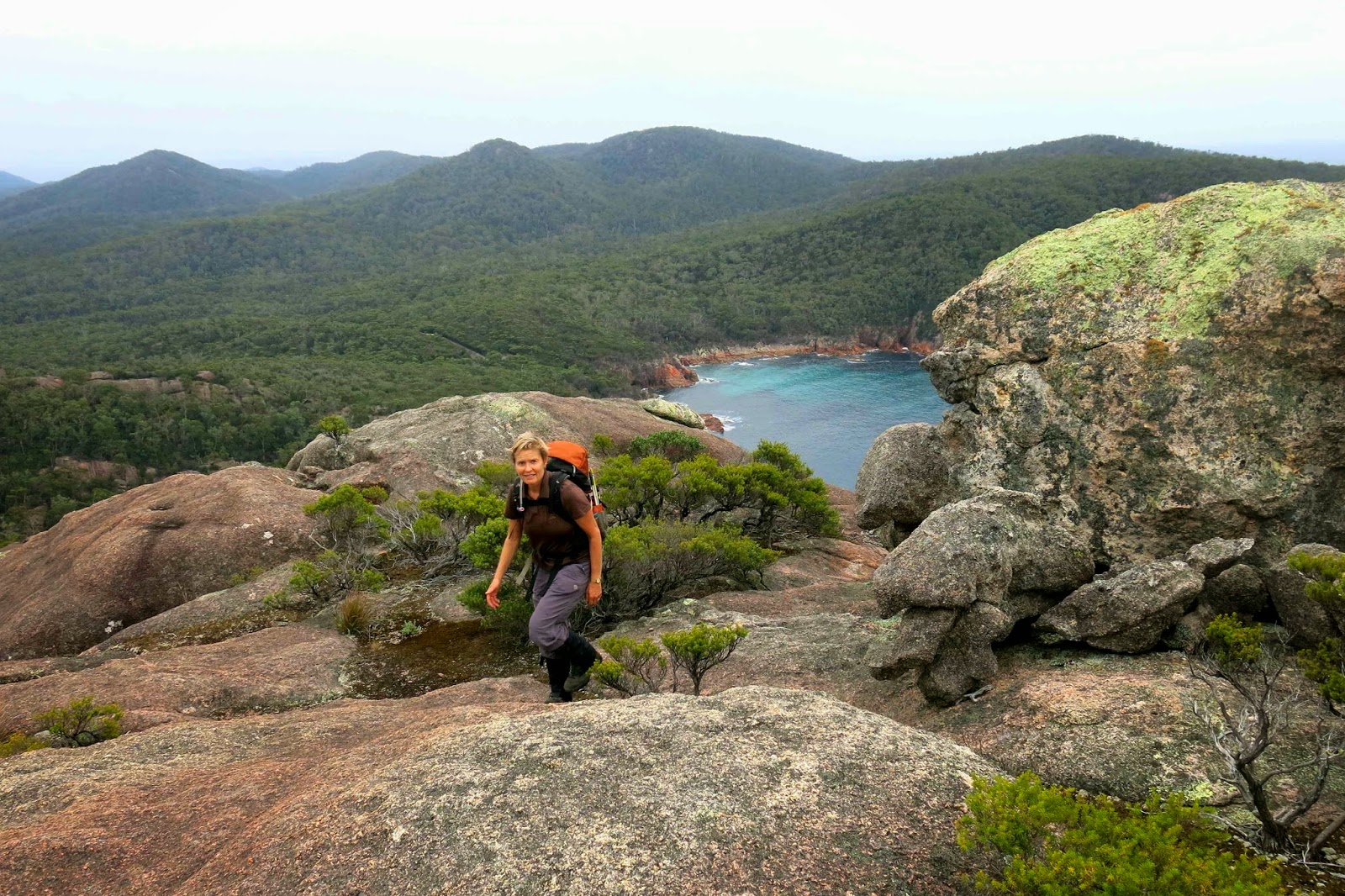 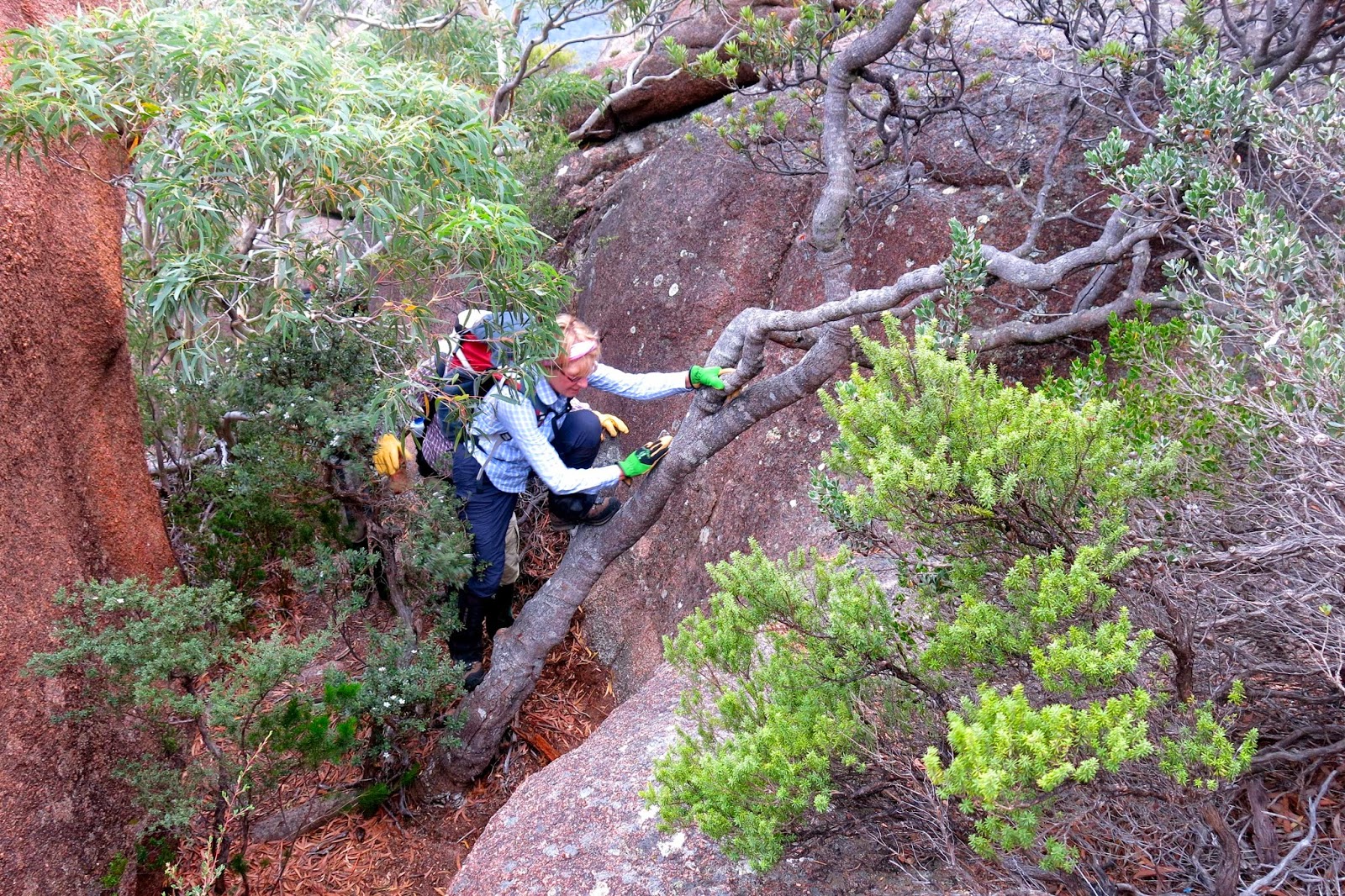 Trees are easier to climb than granite

The first mountain (Mt Parson) had a cairned route, which we dispensed with successfully and then began on the challenging part of the untracked slabs between Mts Parson and Baudin (and more). Sometimes we had to use rope; sometimes we had to climb trees in order to bypass the granite. Sometimes we walked through narrow chasms – at other times we needed to climb like a spider, high above the ground with one side of our body pushing against one rocky wall and the other side on the other, using the outward pressure to prevent us dropping down several metres to the bottom. 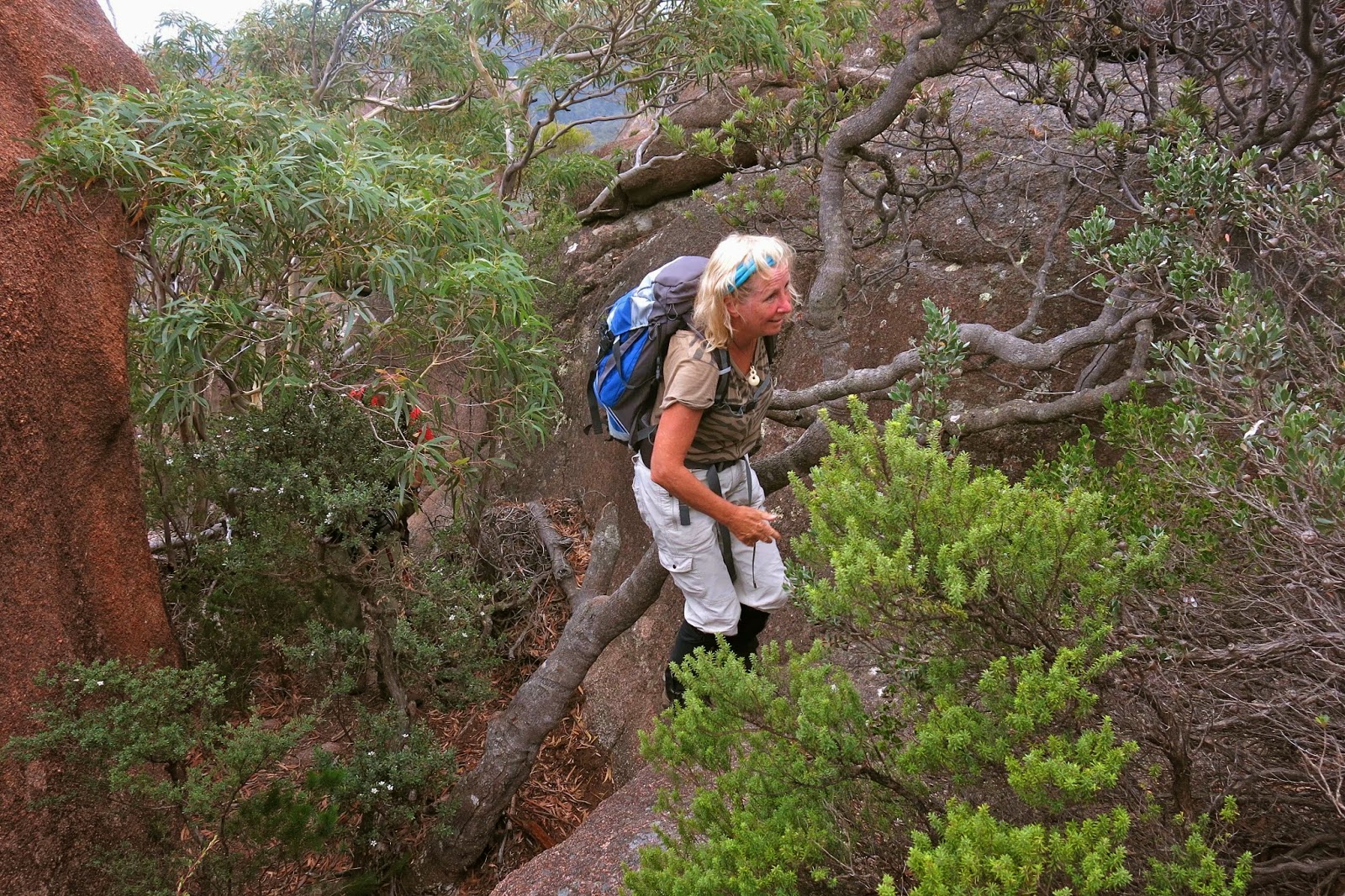 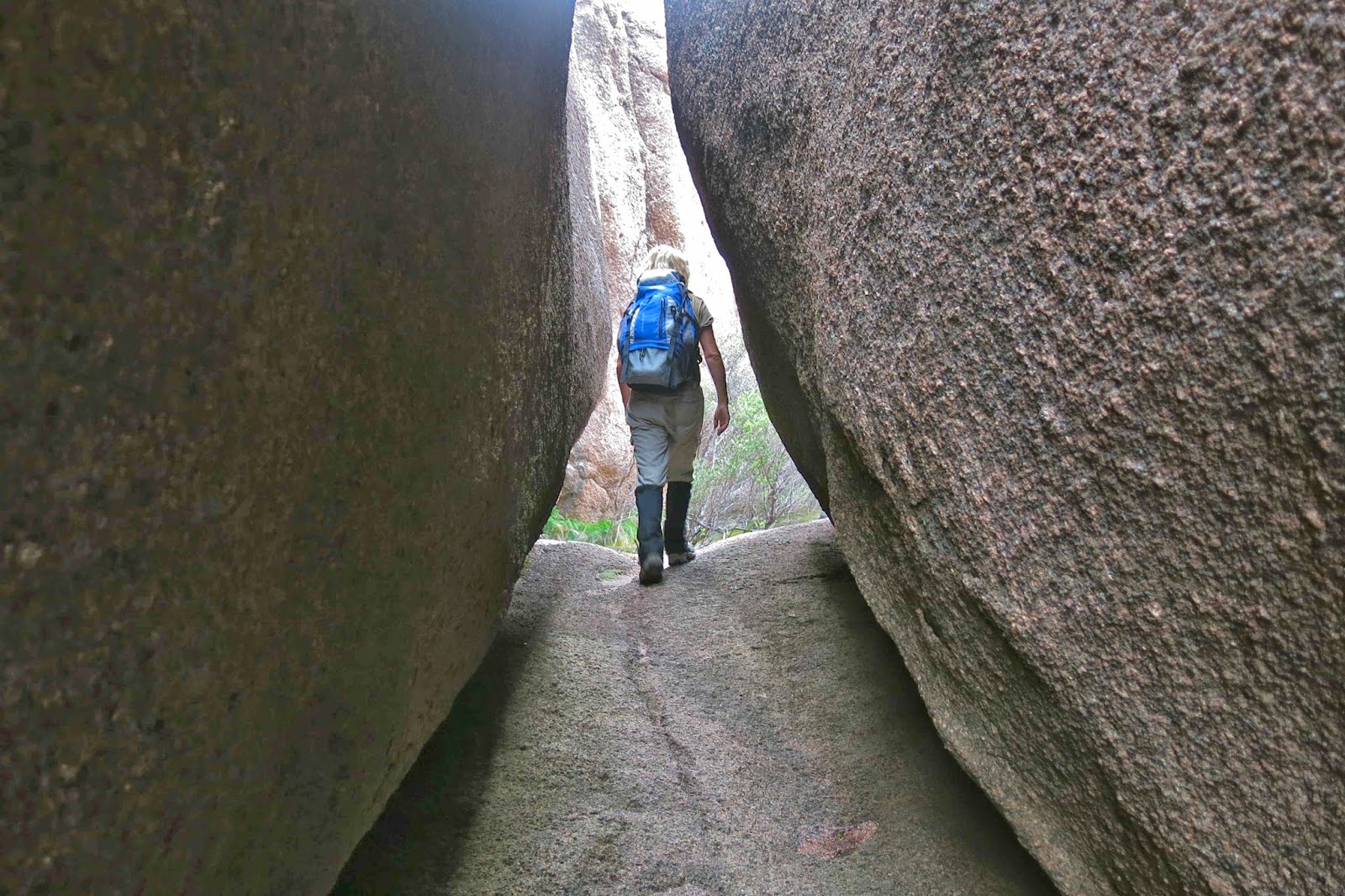 The rain continued falling and the granite increased its slip factor. Slopes that could be danced up at the beginning suddenly became “rope affairs” which slowed progress down. Then the clouds came in so thickly that we were robbed of all visibility so that our expert leader lost confidence about his necessary sightings to line up the best route. 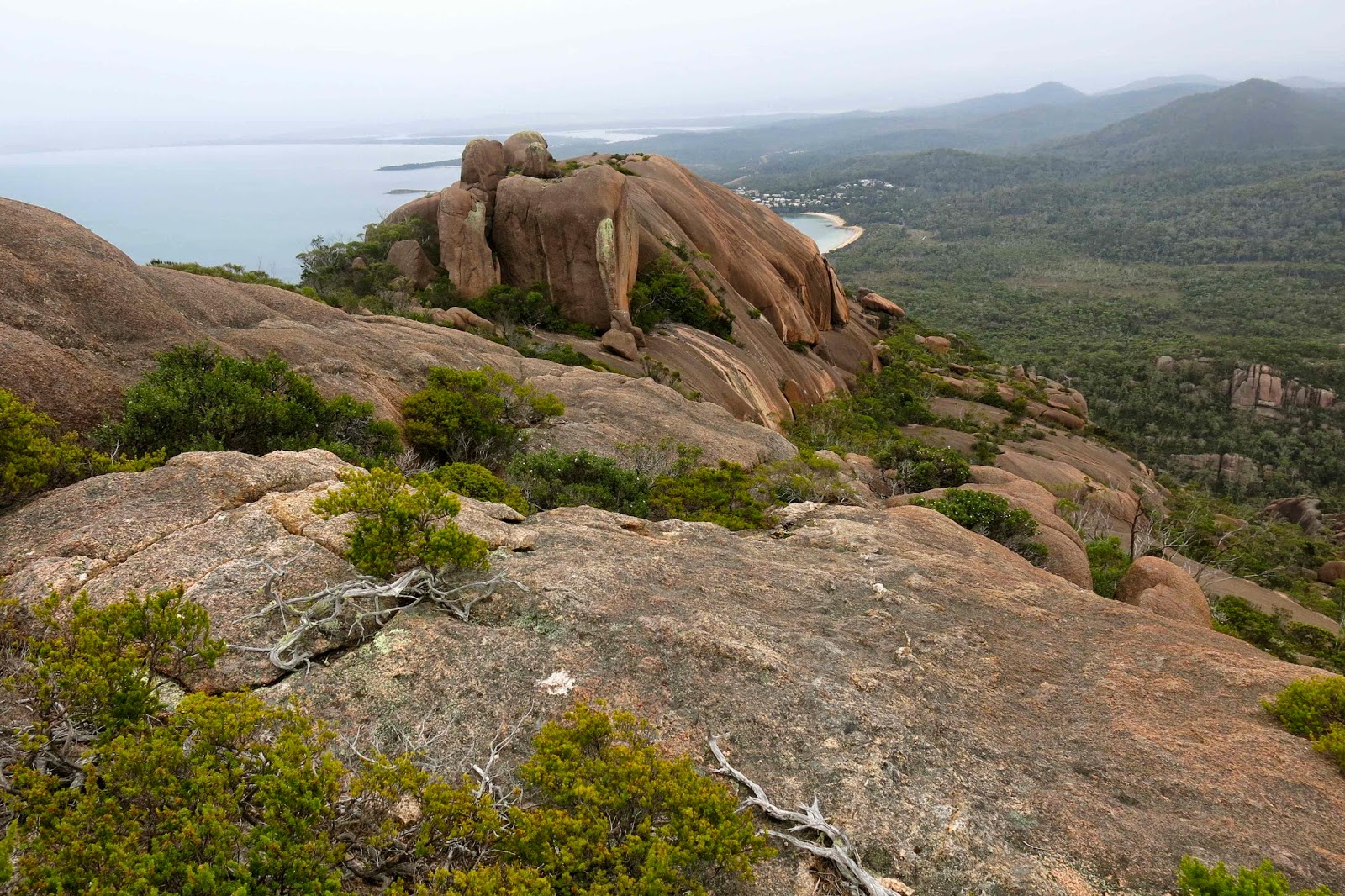 As we sheltered from the rain under a cave to eat our lunch, David voiced his doubts, and everyone did their maths on time taken, time still needed to complete the task, and it was decided by mutual consent that we should bail out before we began climbing Mt Dove. 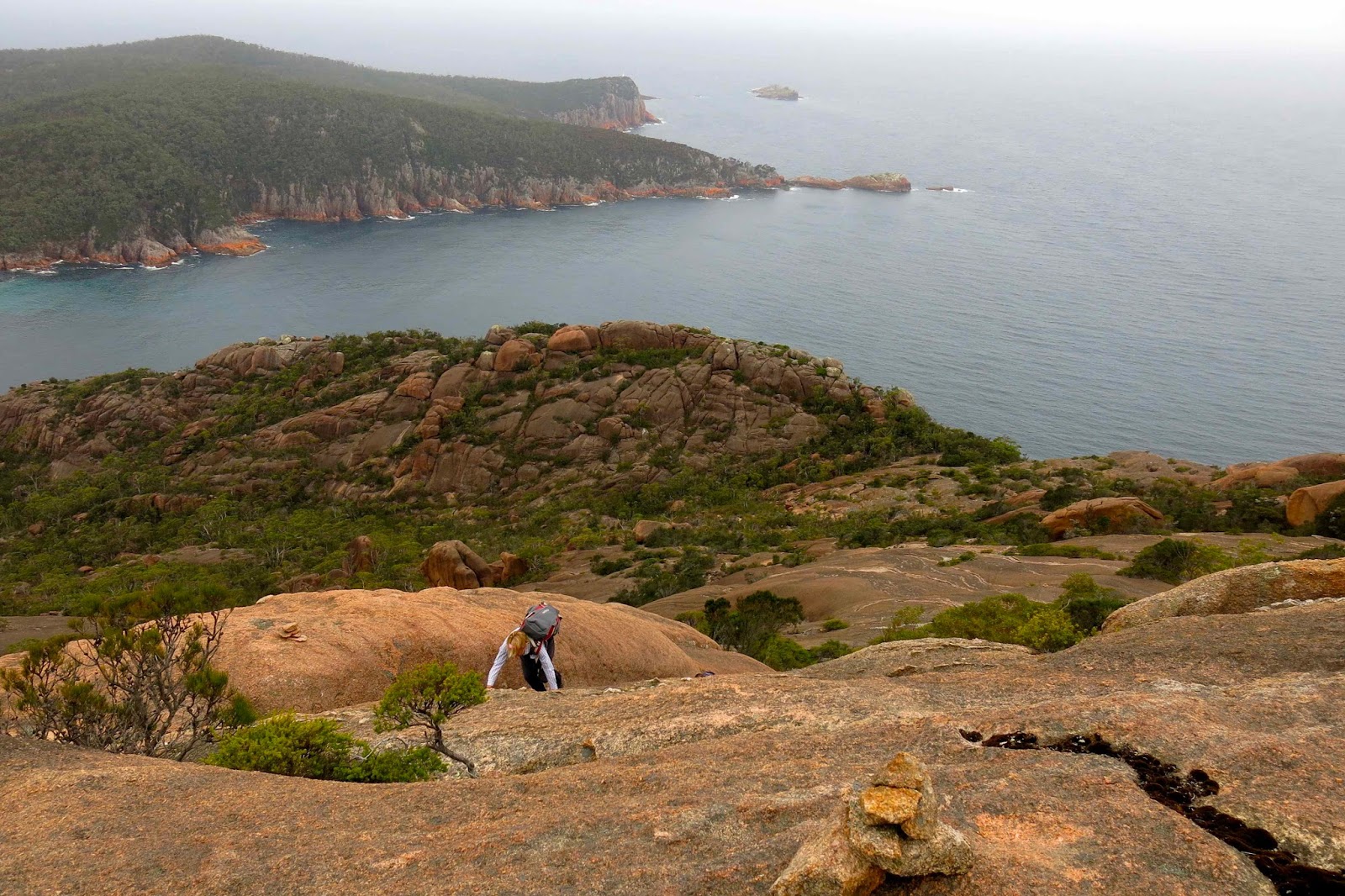 As I was an orienteer, I was asked to lead us down through the thick gully full of giant boulders the size of large buildings. I enjoyed the challenge, and found us a pretty doable path that I was pleased with. Everyone seemed happy to be doing a path that was not the “fight” they were expecting, and we reached the road down the bottom in good spirits. It felt very good to sit in the Coles Bay café in dry clothes and enjoy a hot cappuccino before embarking on the drive home. Thanks to David for a fabulous day, and for his expertise on this traverse that made even beginning it possible.