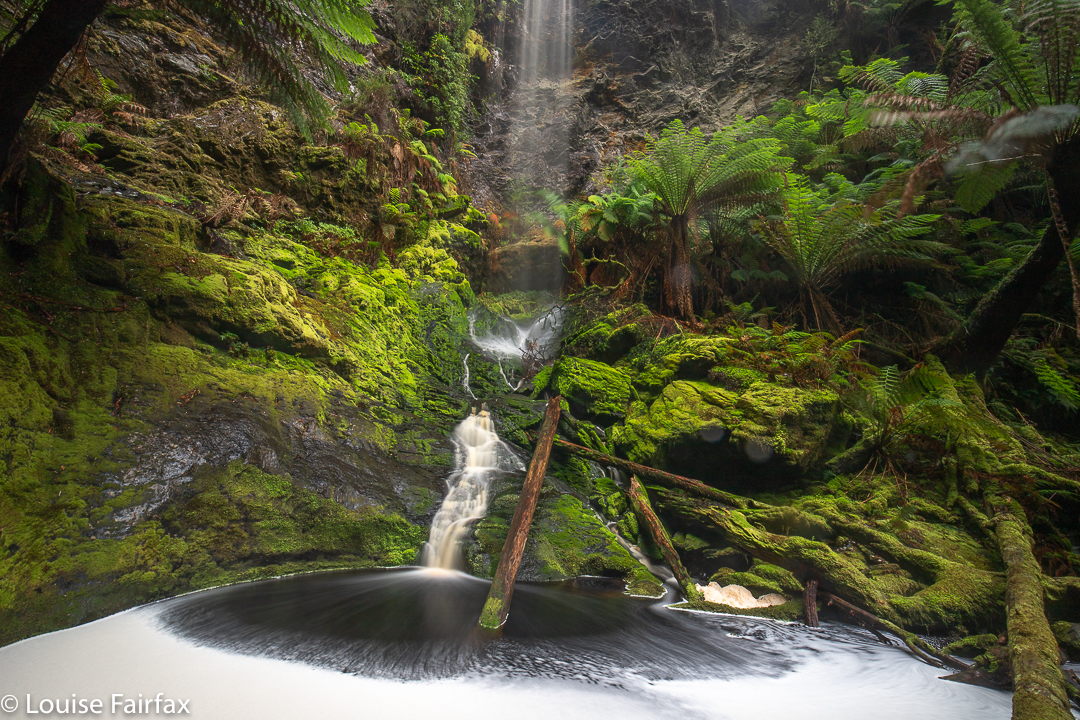 I have wanted to visit Lovers Falls – on an unnamed tributary of the Pieman River, 5.3 kms downstream from Corinna – for years, but I lacked confidence in my ability to debut kayak 10.6 kms. I also lacked someone to go with and I was reluctant to do it solo.

Why did I phone Corinna and discuss the matter? I’m not quite sure, but I did so in January, and the very nice guy who spoke to me on the phone assured me that it was not a difficult river and that all sorts of people managed to do the kayak. He told me, however, to wait a bit, as the water was not flowing enough at present to justify the effort. I appreciated both his encouragement and his honesty. Here began a saga.

Two more phone calls followed, one to discuss the problem of my dog, who would more than probably be in the car with me. The guy solved this by saying she could be in the car while I kayaked, as long as I didn’t actually sleep in the Reserve. Brilliant. That was a HUGE load off my mind. I could easily camp near, but not in, the reserve with my faithful adventure buddy who hates me going off without her.

The next two were to line up an actual time. This is a long story, the short of which was that I was told I was on a waiting list for the morning, and confirmed for the afternoon (which I really didn’t want). However, the night before, the guy at the desk encouraged me to try my luck at 9 a.m. prompt, as maybe someone would see my plight and magnanimously elect for a double kayak, leaving me free to have a single. My persistence paid off.

There was a kayak spare. The guy talked me through the safety spiel and helped launch me into the river. I was so relieved. Now I would have de facto company – at least one of the others on the water might observe if I capsized. Also, it was cloudy, which is perfect for photography. Who knows how wretchedly sunny the afternoon might be? I needed to be on the water now. Also, if I was very bad at this, I might need all day. Much better to start early!
Launched on the water, I began paddling downstream. The river had perfect reflections. The silence was palpable. It was utterly peaceful as I sat there, rhythmically going plash, plash with my oars. Surge, surge. It reminded me of the stroke, stroke of swimming in bygone days, except the view was incomparably better. Would I get tired? It seemed a long way to go.

As it turned out, I was not bad at all. I quickly left the other three kayaks behind, and after about thirty minutes, passed another two who had started fifteen minutes ahead. All up, I took forty eight minutes to do the distance, which I had been told would take one and a half hours. (Although this was my first kayak like this, and I was very worried about the boat-handling side of things, I have represented Australia at triathlon, so I guess my swimming arms haven’t forgotten how to exercise.) This was very reassuring, as it would give me oodles of time for photography, so I took fifty minutes shooting. So far, this was an excellent exercise: photography ratio.

I had been ridiculously clumsy trying to exit my kayak on arrival at the landing stairs: I was terrified of accidentally toppling into the water with thousands of dollars’ worth of camera equipment. Now it was time to try to get back in without sinking my precious gear in the process. That ended up easier than getting out. And how would my arms be? Can you go from nothing to one hour forty and still have arms that cooperate? My forearms fatigued a little, but my hands felt the strain the most. I was pushing with one while I pulled with the other. I haven’t a clue if that’s what I was supposed to do, but that’s what came naturally. I was very glad to see Corinna pop up around the corner. I was timing it, so I knew it should be appearing soon if I was maintaining pace. It was nonetheless a relief to know I’d done it.

I exited my kayak a drenched rat. Every time I lifted my limbs to stroke, water poured down the raised one, wetting my coat. Splashes meant that my legs and shoes got wet. I was soaked, but so happy to have done it that I couldn’t care at all. I am now hooked on kayaking!!

Because I got a morning spot, that left me free to drive home after a forest walk in the early afternoon. Now my only question is: Will my arms function tomorrow, or will I be unbearably stiff????
And I have to say in conclusion, I am very impressed with how patient, friendly and helpful the staff members at Corinna were. I drove home with a very positive feeling.
PS. Arms had no stiffness the next day. It seems that all the offtrack bushwalking I do keeps both upper and lower body nicely fit. Bushwalking is SO much better than doing a gym session!   🙂

Out late up on the mountain.

You’ll just have to believe me, that this is twe

More Tassie brrrr landscape for you.

Some negative space and a cute raindrop. Happy Wed

A tight cluster. I actually toned the colour DOWN

Love the scenes that the colder months give us.

Is this delicacy personified, or what? (Hygrocybe

Worked on re-editing this one two nights ago. I lo

This is a very sad shot for me, as it was the last