Barn Bluff and the Du Cane Range in evening light
I have been planning to sleep on Cradle Mt for a very long time – so much so that I’d even bought a second little solo tent for the expedition. My plan was that I would go with my husband as far as Kitchen hut, and that we would then have to separate, because there’s no way that a man with Parkinson’s disease could get up that rocky jumble with a heavy overnight pack and lots of water needed for eating at the top. I’d watched too many tourists without packs struggling with the slopes to imagine that he could conquer them weighed down with overnight gear. I had no qualms for myself, as the one point where i had had to summon a special oomph push to get up a rock that was a bit too big for me (after the saddle) I thought I could evade. Otherwise, I’d push my pack up the slope ahead of me and do that single effort packless. I hoped I could get around it by climbing to the right. Time would tell. Fury Gorge
My husband, however, had other thoughts on this matter, and told me he reckoned he could do it. I believed him. Saturday was to be the day. Sunday was going to be much too hot for climbing anything, so I suggested leaving Launceston mid-afternoon Saturday, climbing after five, sleeping at the top and coming straight home after breakfast, before the day got uncomfortably hot. It was a deal. Because it was latish when we arrived at the park, there was no trouble getting through the boom gates and right in to Dove Lake. We were ready to roll in mountains already emptied of the madding crowds. As I feared, water was low. I’ve never seen it so dry up there, actually; every tarn was empty, every stream but one, dry. We drank at the one stream and filled our bottles up, taking 3.2 litres for two, which turned out to be more than we needed, but better more than not enough. Perhaps the climb would be thirsty work. We tipped some out before descending next morning. Rock curtains unveiling a scene of beauty
So much for my misgivings about my husband’s ability to cope. I was the one who had to take her pack off to do some manoeuvres – three times on the way up and twice coming down. I think this was partly because when my pack is on, I stare too much downwards rather than outwards, so failed to choose the kind of routes that I choose when unencumbered. My taller husband passed my pack up to me, and then did the same trick with no help at all. I hadn’t even noticed that these potential problems existed when prancing around packless, but it’s surprising the difference a weight like that makes to a climb. 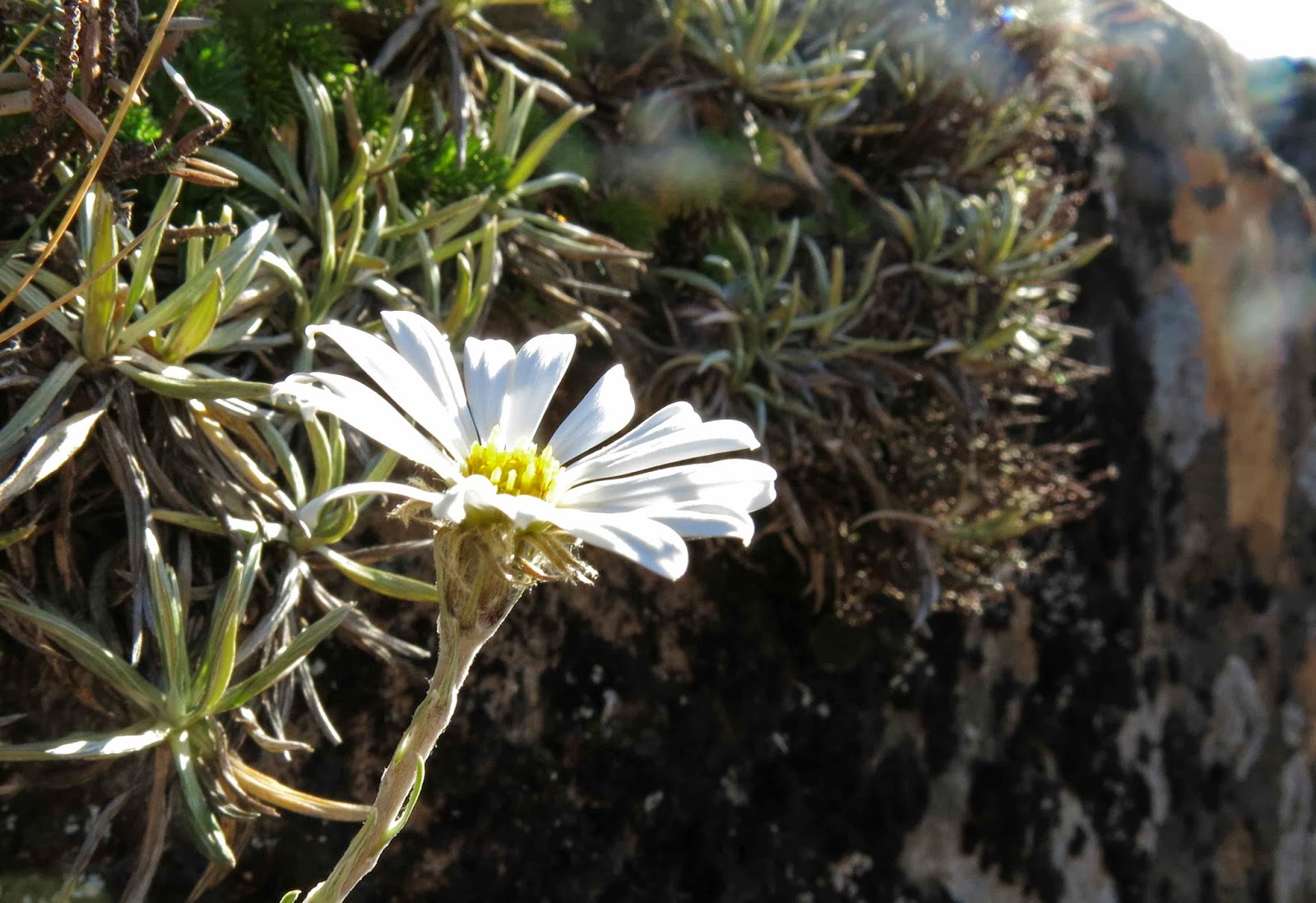 Celmisia saxifraga providing extra colour on top
I love the way that Cradle, like so many of Tassie’s peaks, hides its summit until the last second. You climb and climb (having huge fun while you’re at it) with your face into the rock. If you do stop to look around (which I am loath to do, as I love climbing too much, but I do stop to make sure my husband is fine somewhere down there) then you only see at best a partial view. Mostly you see shapely and colourful rocks, which are marvellous in their own right, but the view itself remains hidden. Up you go, wondering exactly where the summit is, and suddenly you’re there, and the whole world of view opens magically out before you. When you’ve climbed in the evening light, this opening of the curtains to a land of wonder is all the more special. We didn’t just have that glorious mountain to ourselves: it felt as if we had the whole world. Everything felt especially spacious and grand as we perched ourselves on a rock and gazed out to an infinitude of mountains, most of which are now old friends. Somehow or other we took our eyes off the scenery long enough to pitch our tent between rocks and cook dinner, but mostly we just sat and watched nature’s performance. Valentine’s Peak rising out of the mist
There is really not much in life that beats sleeping on the summit of a mountain. I just never become inured to the pleasure of being up high at the close and opening of a day, of dining on high as the sky changes colour and the stars come out and the mountains become a series of mystical silhouettes enhanced with the warm colours of the setting sun. Dawn. Mt Arthur can be seen swimming above the low mist centre back. Western Bluff is nearer, and to the right.

Later, as dark advanced and the stars made their appearances and the last pink of the sky faded, we sang together, as is our habit on mountains. The cliffs that were around us offered nasty plunges to the valley way below, offering certain death to anyone accidentally stepping over an edge. My husband was on strict instructions not to go out of reach of the tent if he needed to get up during the night. We both got up around 3 a.m., actually. It was a moonless night and the stars were particularly wonderful. For me, seeing the stars in the middle of the night is one of the many pleasures of tenting.

The same gazing in wonder procedure was on the programme from 5.45 next morning to watch the day begin, and then it was time for breakfast, descent, and a swim in the lake for my husband.