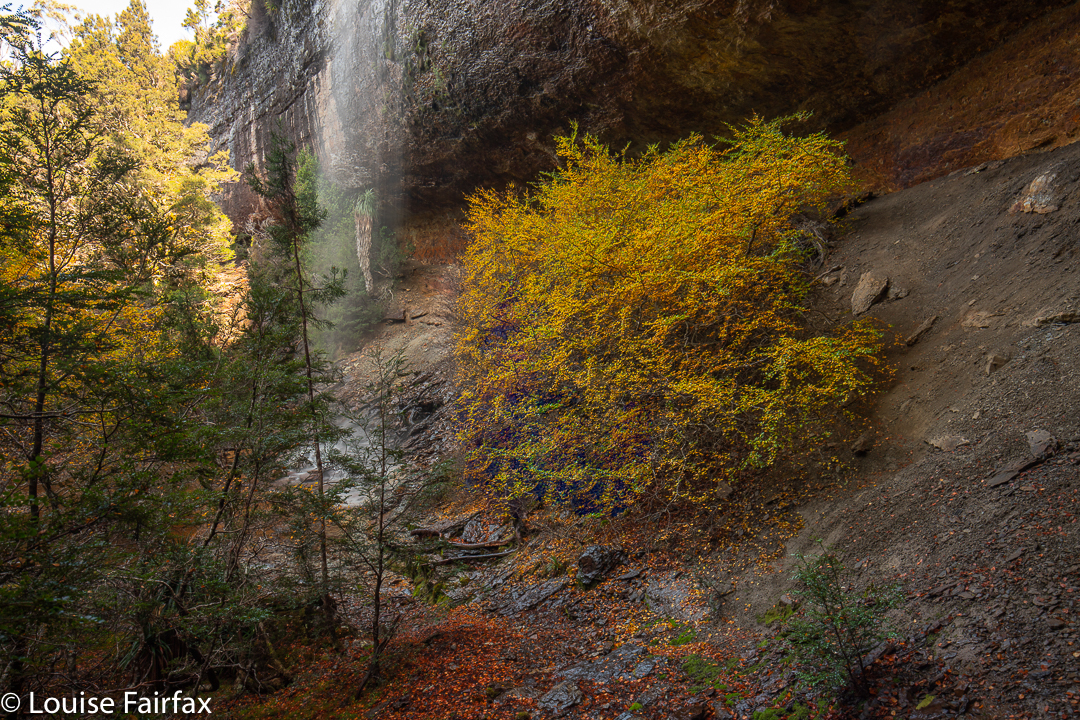 Having had such a fabulous day on Easter Sunday, when I did my long haul (55.6 kms) to see and photograph Pelion Falls, I was eager to try for another big day. Again, without measuring before I set out (partly so as not to fill myself with doubt), I looked at the map and decided I would try for a bunch of little blue lines on the map to the east of the Overland Track, and just see what I got. Surely I would at least get Branigan Falls (the only ones that had a name), and anything else was a bonus.

Because of the boom gate that serious bushwalkers now have to deal with if we want to do more than a tourist waddle around Dove Lake, I had to get up at 4.40 to be away in a time that would get me through the gate before 8 a.m., when the park is turned over to tourists doing cute wanders. The path in the environs of the lake is now so wide and smooth they can probably wear their high heel shoes.
There is always great anxiety when approaching the gate in case the rules have changed again, and you have made all this effort, only to be locked out anyway. My heart beat far faster than during any of the day’s exertions as I waited for the gate to lift. Phew. I had passed through. Now I could relax, and going a bit less than the very sensible 40 kph limit in an area where a wombat could unconcernedly amble into your path at any second, I enjoyed the magic forest and the light playing amongst the leaves.

We are no longer allowed to reach the lake – only tourists in busses can do that these days -, so I parked at the last possible place, making a long day longer, and began the race against time with a handicap, but with happiness anyway, as I was at last walking, even if the time available to do what I wanted was now less than it used to be. Most people tell me they then walk up the sealed, wide, ugly road for 2kms before beginning their real walk. This has zilch appeal to me, so I headed for the Crater Lake path and went up that way. I suspected I was adding a half hour to my journey in each direction. I had a head torch.
I was aware when making my plans that the fagus (Nothofagus gunnii – a deciduous Tasmanian native tree) was late this year, and that if I were lucky, I might well catch some up high, near the southern end of the lake.

My focus on waterfalls entirely shifted when I witnessed the beauty that awaited me. Thank goodness I didn’t have to share it with the busloads. One girl I met later told me she was on top of Cradle and one such tourist had brought a “ghetto blaster” and entirely ruined the spiritual experience of every single other person there by playing his choice of music so loudly they all had to listen to it instead of imbibing beautiful silence.
But I was alone and had this stunning world to myself in all its quietness and sanctity. I forgot my haste and need to rush to achieve my goals in the time allotted, and just relaxed into the moment of beauty. Who cared if I got no waterfalls? Not I.

Photography finished for a short while, but camera ever ready, strapped to my chest, on I went. Up up up to Marions Lookout, and then a tiny bit higher still before eventually dropping to Kitchen Hut, and my first pack break for a quick drink and bite to eat. I have been doing a lot of hefty uphill running this week. Whoops. My legs were already a bit tired. Oh. I’ll try to start fresher next time I get one of these long days into my head.
Around the belly of Cradle I went, and eventually down the path that I always enjoy to Waterfall Valley Hut, which I reached in less than 2 hours 40 from Waldheim. That was OK. If I wanted to be back at the car by 6.30, I didn’t need to leave this hut until nearly 4 pm, if I needed / wanted that much time. Now my actual adventure was near to beginning. I didn’t need another break yet, and I thought I would have it at the first waterfall, relaxing by the flowing water.

I had never eyed up the territory to the east of the track with walking there in mind, and imagined it to be pretty thickly bushed and not exactly fast forest. What I found was more kind of alpine plains with max thigh-high bushes, and sometimes much better than that. I was pleasantly surprised. I visited six waterfalls, four of which were blue lines on the map, two of which were more cascades than falls, but they were bigger and more photogenic than at least one of the marked waterfalls, which I actually didn’t even bother to shoot.
The forecast had been for a cloudy day from 10 a.m. onwards, so I kept waiting for the clouds to roll in, but they would have none of it. That is their right, but their absence did ruin some of the falls I shot. My favourite falls I have called Glory Falls, as a deep sense of glory filled me, even before I had reached the base. I took just a phone shot from above as the “view” was all hints and potential, and the drop vertical and seemingly infinite. I could see no possible way down, but, well, I kept trying and lo and behold, I reached a point down stream of the falls, and then worked my way up along a chasm, sometimes in the water, and then reached a kind of pandani- and moss-filled chamber with honeyed rocks, and lacey water adding charm. I decided in this place that I didn’t care for any more waterfalls. I just wanted to linger longer here, maybe forever. “Verweile doch, du bist so schön”,

How long was I there? Who knows? Who cares? Eventually I was momentarily satisfied, or, satisfied enough to move on, but I was kind of in a beauty-trance for hours afterwards, and can’t tell you much about anything. I did photograph some more waterfalls, but I felt very complete, and just kind of filled in some more time doing what I’d come to do, but then I decided enough was enough and I was ready to turn around early. I don’t stuff myself at feasts.
The way back was nearly as sociable as my return from Pelion Falls. Funnily, the first people I met were three people I know, who wanted to climb Barn Bluff, but didn’t want to get up at 4.40 to beat the gate, and thus had no car to get back to, so had to turn one day into three to get around the locked gate problem at each end of their days. They were enjoying the view on the Cirque.

I met two who were running with big packs on. They had climbed Barn Bluff, but were now anxious about missing the bus, so had to rush through the scenery in order to make it by the 4.30 pumpkin hour.
Once I reached the creek issuing from Kathleens Pool, the light was becoming interesting. I knew I would easily make the car in the light, and, due to incredible amounts of smoke in the air, the light was turning pink, even though it was only about 3.45 pm. I was peckish, so decided I would have a nice long snack and watch the light for a half hour or so. I was just enjoying munching and drinking and enjoying light when an exhausted looking couple came by and stopped for a brief chat. They looked not only weary, but also a bit despondent as they explained there was no way they could make the bus, so, although they had just climbed their first mountain ever (Cradle), they now had to walk an extra 10 kms after they finished, to get back to the Visitors’ Centre, where their car was. They were not complaining, but they were far from excited by what lay ahead, especially as this 10kms would be on a sealed road.

I liked them, so I told them that if they could just go a bit faster so I didn’t have to wait too long, and if they used my route, I would drive them back to the Visitors’ Centre.  I told them to set out now whilst I was still eating so as to give themselves a head start. I was at the tail end of a very long day, and still had a 2.5 hour drive once I had finished walking, which was maybe at least an hour more yet. I was in grave danger of falling asleep at the wheel, so didn’t want to be too delayed by these people, lovely as they were. The look of relief on their faces had no price tag.

Alas, I caught them at Marions, so started taking photos as I went to slow myself down. They were relieved to see my reduction in pace and agenda, so took photos too. Ah well, what the heck. The three of us photographed the evening, and got to the car just before dark. The girl wanted to see a wombat, so I told her where to find them, and went quickly off to the toilet while she photographed. As I dropped them off, it was about 5.30, too early for dinner yet, so I told them where they could find food.
“There’s a pretty good place at Moina”, I said.
“Oh, so do we just go to the town centre and look for food?”, asked the guy., who had just googled what he thought was something substantial.
I roared with laughter.
“There is one building, and it sells food, so I guess it is the town centre, yes.”
They laughed too.

After they left my car, I realised that in this age of Covid, things like we had just experienced would become, or had already become, a big rarity. Hospitality to strangers is perhaps a thing of the past with the fear that a stranger from inter-state, as these two were, might be carrying the dreaded disease. I have never been a health-risk-and-safety fanatic. Hospitality, kindness and good will are very important to me.

My big danger was now falling asleep while driving home. Not for the first time, I managed to talk to my daughters on the phone to see me through the worst of my drowsiness. Normally, loud opera does it, but it had been a very long day with that 4.40 rise.  I kept slapping my legs and scratching my arms to hurt myself into wakefulness, but it wasn’t doing the trick. The phone did the job. My dog was very glad that I was still alive so she could get dinner.

6 Replies to “Waterfalls off the early Overland Track 2021 May”