A cold start to a wet mountain The day for this summit attempt began with a chilling wade through a swollen creek, after which I really needed to be allowed to move at a pace that kept me warm, whereas the others wanted to take the incline at a pace that would have had me shivering to death. The leader agreed to let me do my own thing so I could keep warm. As a result, the first day of this trip, which included, at last, a summitting of Mt Tyndal, was done solo. Luckily I had my gps for the summit, as there was a total white-out, with snow blowing all around me, and only it could confirm that I was standing in the right spot (and only it could guide me to the spot, as I could see nothing but snowflakes).

I returned to our designated camping spot and ran on the spot and danced to keep warm until the others returned. An eagle was my lunchtime companion – but it looked to me as if I were to be the lunch. I have NOT used zoom on this guy. He thought I was a lamb, I’m sure. I have another photo of him just above me, staring straight at me, looking poised to attack. We camped near here. View from near the summit
The others returned soon enough, and we began to prepare our meals together (those of us who could stand being outside),  huddling around the gas flame of the cooker, pretending it was providing a greater warmth than the flimsy requirement of boiling three cups of water. I did a bit of dancing to keep from freezing into a solid block, and was hugely appreciative that our coordinator boiled extra water for me, so that I didn’t have to fight my stove with hands that weren’t really working any more. Had she not done that, I would have just contented myself with snacks for dinner – not nearly as nice. 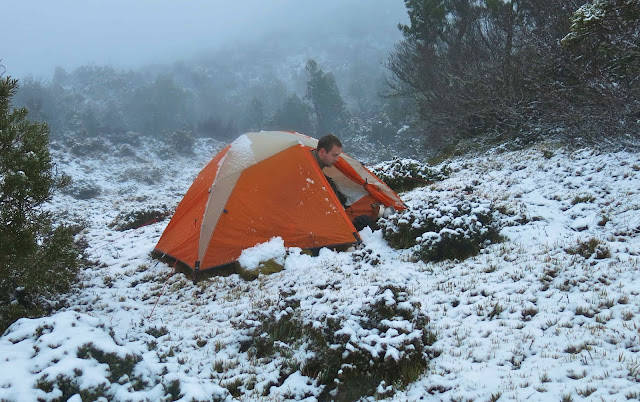 Next morning
We retired to bed early, as after the eating, there was no more point in standing around getting colder while the snowflakes fell around us. My feet had been sopping and frozen all day from the first river crossing – about five minutes into the walk – so I was quite busy in my tent, massaging them to try to restore some life, and then doing a series of exercises to warm up my torso: glute raises, bicycles, crunches and more. After three and a half hours of concerted effort I was warm enough to try sleep. Success. I slept for four hours, but then woke up cold again, so repeated the procedure for a couple of hours, dropping off again at about 4.30. Considering how cold it was, and that it snowed all night, I thought it was pretty good to get even that much sleep. I wasn’t expecting any. The snow next morning was beautiful, and duly photographed, before the dreaded job of depitching had to begin. Why dreaded? Because I would need to don saturated, snowy socks and sodden, icy boots and drenched, unpleasant gaiters in order to do the job. It was not a joyous occasion. The next hour and a half were not the favourite moments of my life, and we’ll leave them without much comment here. We got there in the end, and could from the perspective of safety look back and declare it a marvellous adventure. That was my second attempt at Tyndall – both times in disastrous weather – so I’m very glad to have made the summit despite the blizzard. I want to return to see the view some day.