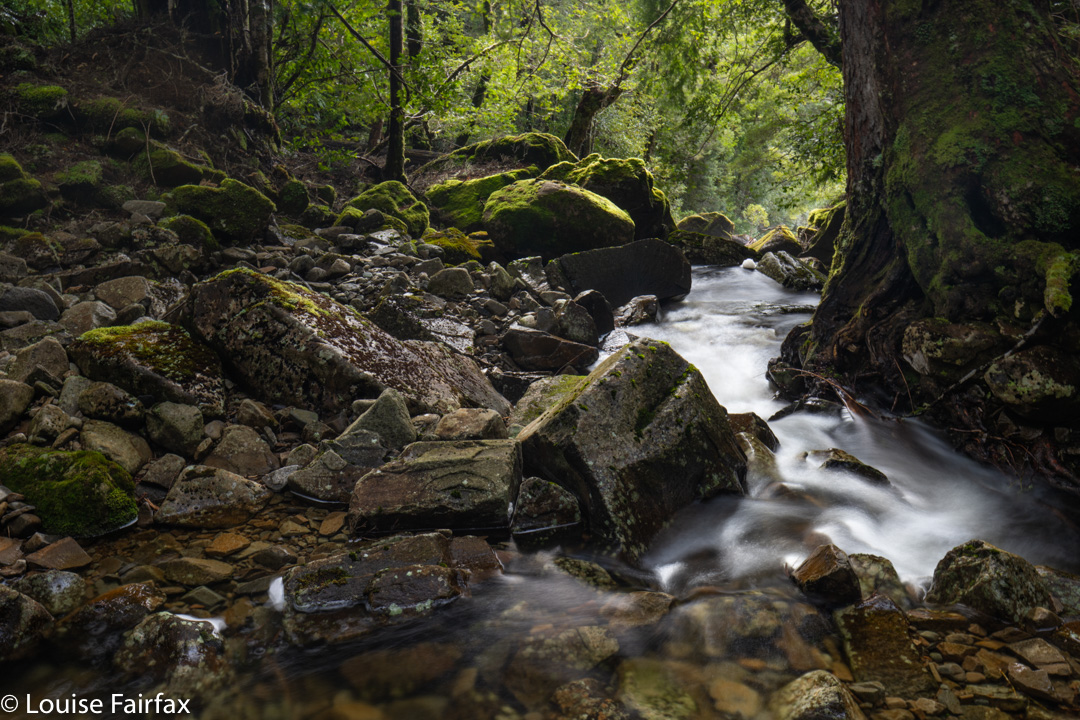 Horeb Falls day (today) seemed to start quite well. The road beside Lake Rowallan must have been recently worked on, as it had fewer nasty attacking rocks and deceiving puddles than on my last visit. And, it wasn’t raining, despite BoM predictions – which admittedly still had plenty of time to come to fruition; there were some very healthy clouds floating around the place. Off I set, along the Jacksons Creek track, which I intended to stay on for 15-20 minutes until it crossed the creek on a swing bridge, after which I would hive off to the west. Hm. The track was actually frozen and I was sliding everywhere. I had to slow right down. Even when I trod on old bracken (of which there was plenty), I was skating, as the fronds were coated in a thin rime. The myriad fallen branches were also treacherously slippery, and, hm, where was the track, actually? I kept having to search, as the large quantities of bush debris (artistically dotted with snow patches) obscured any trace of a path. Sometimes I just gave up and hoped to pick it up later.

At one stage, I got out my gps to check. Horrors. I was nowhere near the mapped track. Just in case, I called up my Cathedral Mountain route. Ah. Yes. Hardly for the first time in my experience in Tasmania, the track on the map and that on the ground bore not the slightest resemblance to each other. The dashes on the map were a mere “artist’s” fumblings, which is quite dangerous when you actually need accuracy. Luckily I had my own old route with me, so used it to guide myself back to where the ground track was.

Jacksons Creek was roaring, and several pop-up creeks had appeared along the route. I decided to change my plan to ensure that I could get across the next creek with maximum safety, and continued on the “formed” track for a while later. Surely it would cross at a good place. It did. With the aid of a broken branch, I even kept my precious tootsies dry. Wow, the stones were slimy!! Being solo in territory like this requires extra care.

I climbed a short steep incline, swerving now away from the track, and began the bushbashing section of the day. Unfortunately, I had earlier ascertained that my compass was not playing game and was randomly selecting directions. (Had I accidentally brought a northern hemisphere one along? Possible.) My map said to keep the more sharply contoured section to my left, the flatter land to my right, and use that to get around the spur, climbing a little.

I have already mentioned the debris. There must have been an almighty storm in the somewhat recent past. On the nose of the spur, fallen trees were piled on top of each other as far as my eyes could see, in an untidy fiddlesticks jumble. The wood was icy, sodden and treacherous, but I could not get under or around it, so would have to do what I hate doing, and tread on wet wood. ‘Over’ was the only way if I was to move forwards. I made gastropods look hasty. Testing everything before i committed, and using, as ever, all five limbs. I snailed my way over the obstacles, eventually reaching the next band, one of thick bracken and tree ferns that concealed submerged tree mines.

It was with enormous relief that I finally made it back to the rainforest. Ahhhh. The green lushness of that calming moss and the delicate myrtle leaves instantly erased all the anxiety and negative feelings caused by the spur. According to the map, the falls were still about a hundred metres upstream, but I could see foam and beauty below me, and I don’t trust Tasmaps’ placement of waterfalls, so I descended to the creek to investigate. Definitely worth photographing! I dumped my pack (with, possibly hilariously, two sets of ice spikes.) But, oh no, it contained no filters for my camera. Ach. They must have been left in the boot of the car. I’d have to take lots of shorter shots and stack them together later for a single long exposure. Sigh. From this point on, the creek was magic, and I took lots of photos and enjoyed the green beaches, and the feel of the forest. I was also starving, so got out some food, but discovered that the water was so cold it hurt to drink, and lowered my core temperature drastically and almost instantaneously. I couldn’t afford that, so opted to go thirsty.

Now, quite apart from skating on ice, losing the track early on, being held up by tree bandits, forgetting my filters and not being able to drink the plentiful water that surrounded me, I began to have problems with the sun. Right up until when I got out my camera, it had been snowing lightly. The minute I pointed it at water and took the lens cap off, the wretched sun came out and would not go away! Grr. Meanwhile, thirst was getting to me. I decided ginger chocolates would help. I opened the packet (which resisted my attempts at first) and whoosh, little brown bombs flew everywhere. They were subtly disguised on the brown humus, but I did retrieve some. Na ja. The beauty overcame all. I obviously need to return on a day that is more consistently overcast, and with my filters. I had squandered too much time playing with all the different drops and falls to then do the full circuit, so did my own much smaller one on the rebound.
If Horeb Falls were not already named, I would call them Glory Glory Glory. I spent about an hour and a half playing around their presence. You are no longer in “time” in a place like that. You lose yourself. The world stops … or maybe you just step off it.
Another waterfall you may want to visit in conjunction with this one is Meribah Falls, about 1.5 kms upstream. See my separate blog on this waterfall
http://www.natureloverswalks.com/meribah-falls/