“I hope I’m pleasantly surprised by this mountain today. I’m not feeling overly hopeful.”
“Why not?” asked my husband,  probably wondering why his wife had brought him on a walk that she wasn’t expecting to enjoy.
“Hmm. The picture in the book was rather dull – it looks rather a non-event – and the book says it’ll take 4 hours from car to summit, which is rather a long time. The distance doesn’t seem overly long, so that bodes ill re the terrain.”
“Why are we going then?”
“Mhm? To taste new things. Besides, when expectations are low, you often end up loving whatever it is. If we don’t like it, we won’t go back.”
Well, it was too late for him to object. He was already in the car and we continued our way through the gloomy dawn mist; at the very least, we’d get a good workout, which for us is always a positive. 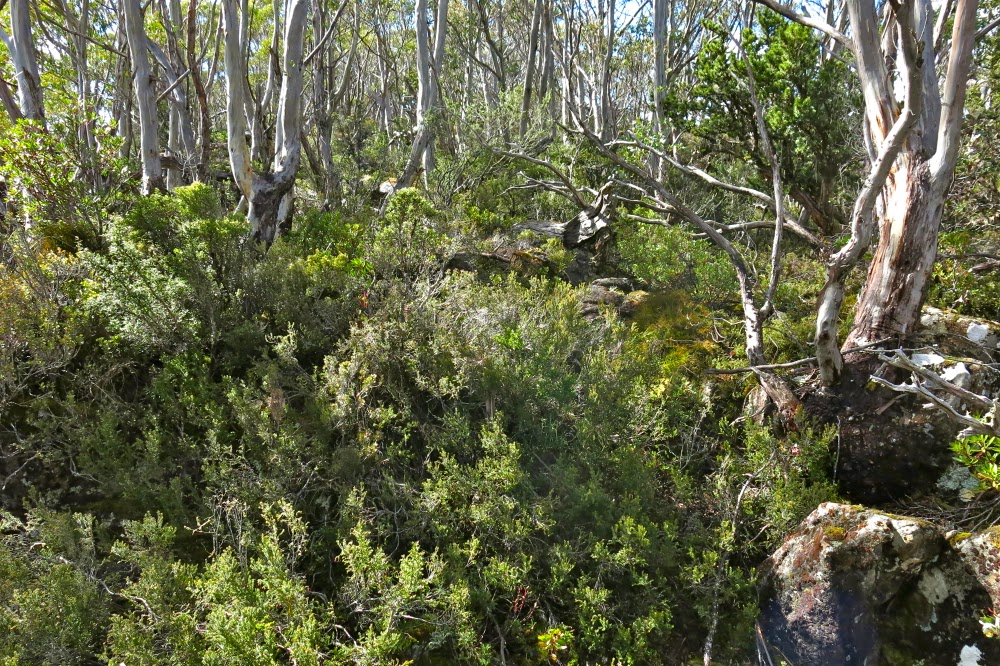 Easier scrub near the top of D’Arcy’s Bluff

And what is my verdict, now that I’ve completed the walk? Unfortunately the old “low expectations trick” didn’t quite work. I will certainly never climb D’Arcy’s Bluff again, having gained my single point for the efforts, but I would return to Wentworth Hills via the route of our return. Although the lower slopes of D’Arcys had rather lovely myrtle forest, and were sufficiently open to allow pleasant walking, that forest type didn’t last long enough, and ceded too soon to drier, bushier, thicker stuff, cluttered with fallen timber and rocky jumble as we sidled our way around under the palisade of cliffs, looking for a break that would allow us up to the top level. 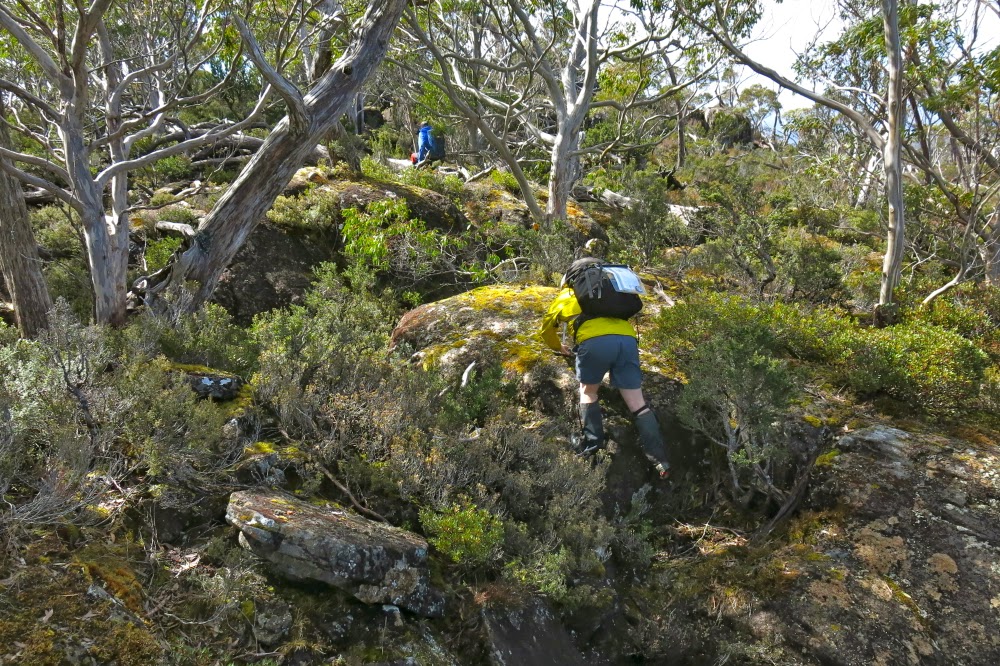 Nicer going right on top
Up there the rocks became mossy again, and a view opened up over Laughing Jack Lagoon way below. It was not the most dramatic view in the world, but at least there was more reward than just the acquisition of a single peak-bagger’s point. The more open section between D’Arcys and Wentworth Hills
On we pressed to mountain number two, the dubiously named Wentworth Hills (the minute you call a mountain a hill you’re asking for trouble in my books. Who wants to climb a mountain called a hill? Only a fairly desperate peak bagger). The bush wasn’t too scrubby, although not lightning fast, and then there was a fairly long stretch of spongy open wetland with only calf-high vegetation that sank somewhat even under my unimpressive weight. A bit more scrub, sightly thicker, another rocky barricade and the summit at last. Not a moment too soon. I was absolutely ravenous. View from Wentworth Hills, to Lake King William (L) and Lake St Clair (distance, R)
There had been a mild dispute over direction down lower, and I, knowing that others had gone off in the direction they felt to be the summit, took that as licence to do the same, and as it so happened, got to the top with a gap of fifteen or so minutes in which I could soothe my soul by staring out to an infinitude of natural delights: to vast blue and grey skies stretching to worlds beyond, down to Lakes King William and St Clair, and across to a cornucopia of mountains, many of which are familiar friends, but seen here from a new angle. It was delicious to have the summit to myself, to photograph and spend silent time with the beauty. Having taken the photos I wanted, I chose a rock and quietly munched my roll, gazing, gazing, not even worried by the rather strong breeze. Lake King Will and the King William Range (et al)
I reckon there was enough ground water near the summit to stay overnight up high. As to whether the mountain would pay off the trek up through the resisting forest with a sunset that made it worthwhile, that is a question that I may … or may not … one day solve. Our return route was via a saddle to the south-east of D’Arcy’s Bluff, and then following the slight spur to the left of the creek that issues from it until it intersected with the road. That’s the way I would go if I didn’t need the point for D’Arcy. If I did need the point, I’d still go up beside the creek to the saddle, and climb D’Arcy via the “back door”, after I’d got my Abel (Wentworth Hills), on the way out. The bush is friendlier by far from that angle.

Zoom in on the watery mountains surrounding Lake St Clair – an interesting aspect.