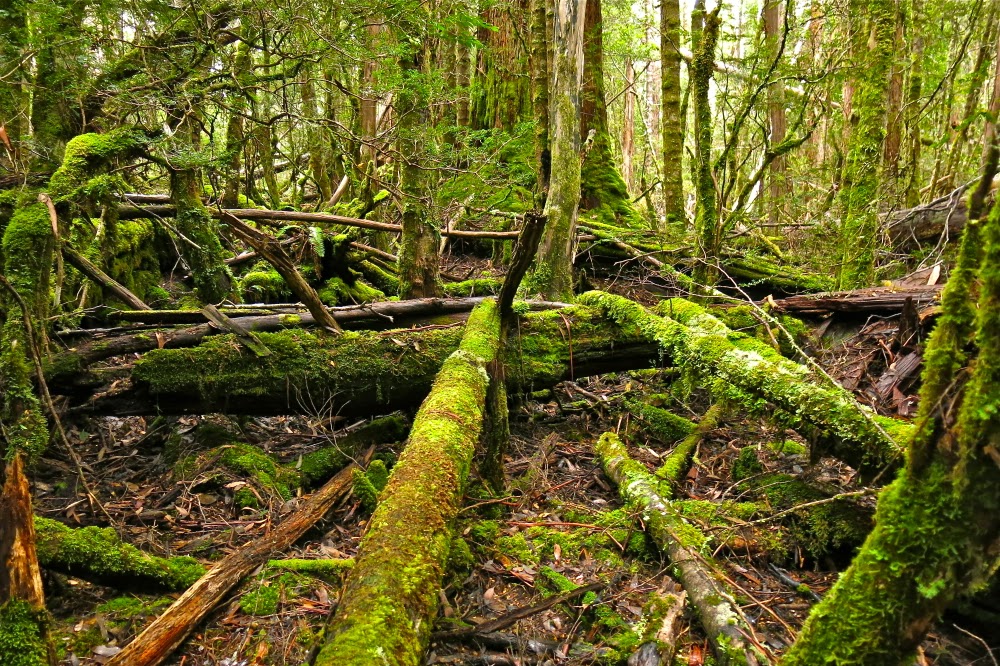 Probably the easiest bit of forest all day. You could actually see ahead to take a photo of something

I pulled off my clothes (luckily I was standing in the bathroom) and half a ton of leaf litter and general forest debris fell to the floor (no wonder I’d been feeling prickles on my back). I couldn’t pull the huge twigs that were entwined in my plait out; they’d have to await the help of shampoo and conditioner, although I wasn’t even sure those items could do the trick. Three leeches dropped to the floor and began squirming around. My husband brought up the salt shaker and we got childish but sweet revenge on these slimy monsters, although they have had the last word. I write this two days later and I am still scratching where they bit. The way ahead – again, an easy bit, the moment for photography wrested from our progress thanks to a toilet stop.

“So;” you say, “that was a pretty horrid trip.” No. Wrong.
“Oh then, at least you got to the top and got a point or two.” No, wrong.
“You had some nice views along the way?” No. It was cloudy nearly the whole way, and raining for the second half. The views were of my two companions and some rocks on top.
“You had a good workout then,” you’re getting desperate to find a positive at this point. I doubt even that. The bush was so very thick that we didn’t move fast enough to get the heart pumping. We fought (with greenery, not with each other) nearly the whole way.
“OK, so what on earth can you find that was positive in a day where you fought a battle against the bush that you lost, didn’t get a view, got very wet and filthy and bitten by leeches?” I had a grand adventure with two really fun companions who, like me, never gave up until absolutely forced to. We still haven’t given up. All three of us are absolutely determined to return as soon as possible, correct the error we made of being on the bombardier track for too long so that the bush we had to fight was a formidable and well-equipped foe, and get to the tippy top of our peak. We might even get a view next time. You never know your luck. Das Gehen its das Ziel (the going, or journey, is the goal). We had a great journey full of chatter, and the forest was sometimes very beautiful when it wasn’t a blockade of challenge. It is cliché to call it “character building”, but it was. I would stand there, feeling defeated by the fact that I couldn’t see a way forward, and yet somehow I forced a tiny few metres of progress before the next bosky cul-de-sac. The other aspect that I call positive is that we now know Hobhouse’s “dark side”, its wild parts. I agree with Robert MacFarlane that you don’t truly know a mountain unless you’ve slept on it. We didn’t put our tents up, but we did experience our mountain in a temper; we saw it dressed in rags rather than just in party clothes. I feel much better acquainted with it than if we’d had a fast and trouble-free run, and I have far more respect for it than I would have if I’d just had a dash for cash. We worked hard with only a single, minuscule drink stop until we had crested the top of the ridge and stood on the final part of the ascent route. My gps said we only had 17 vertical metres remaining to climb. We were at a lump that was “false summit number one”. We knew the real one was number three, but it was a myth in the clag. The only clear thing about the way forward, like everything that day, was that there was no obvious route and that the going would be slow. You don’t need to be Einstein to work out that we had already run out of time. We threw down a very late lunch and turned our backs on our quest. Our mountain will wait for us, and by being sensible, we’ll be there for it sometime soon too. We hit the bombardier track just as dusk was turning into night, and it was dark before we hit the registration book that is 15 mins from the dam. The night shadows and silence added to the sense of our adventure as we completed our journey, satisfied and happy.