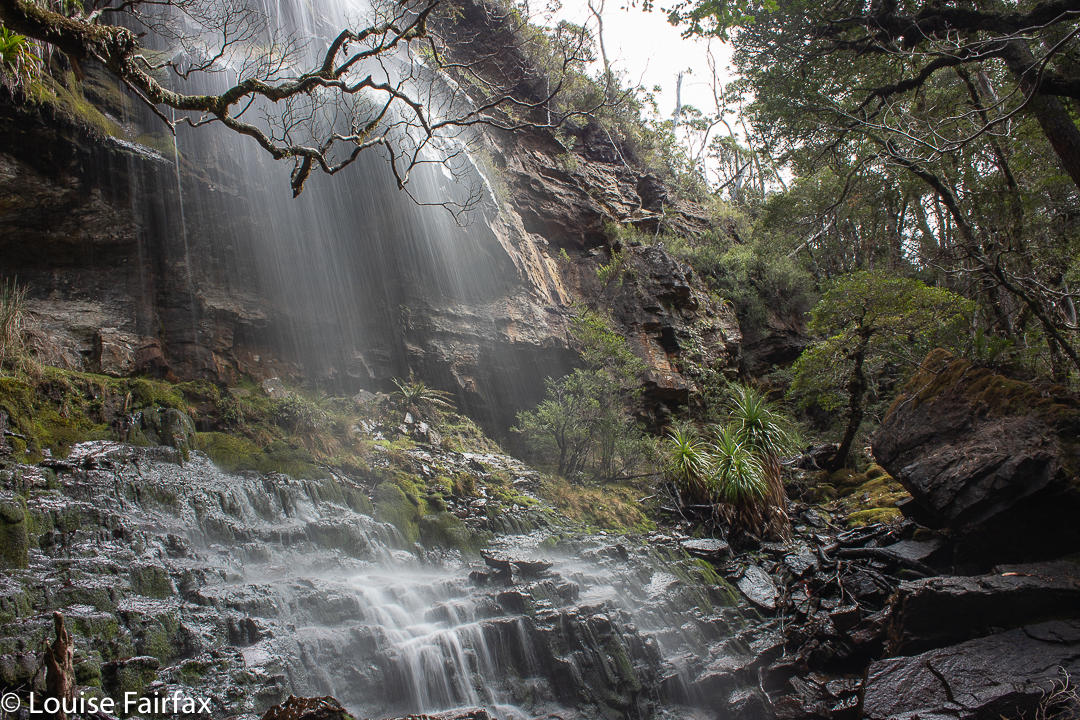 I was in search of a decent-lengthed workout, and have long wanted to visit Pelion Falls, on the northern side of Mt Pelion West. I decided that I’d have a go at reaching these falls (and back) in a single day. If I failed to succeed, the act of trying would be reward in enough. I would have a great workout in the mountains, and get to enjoy wonderful scenery while I did it.
Little did I know that I was setting out on a 55.6 km walk, to be squeezed in before it got dark (although I did have my headtorch in), and carrying a 7.3 kg pack containing food (nearly 2kgs at the start. I returned with 1kg), emergency equipment – both clothes and electrical -, and, of course, my trusty tripod, Nisi filters and full-frame camera.

It is pretty impossible to calculate absolutely the distance to be covered from a map, where many of the twists and turns are not reckoned with, but I thought I could be letting myself in for a 35-38 km day. Why would anyone check on the gps track data whilst in motion? I decided to have a look at half way, and without taking height into consideration, I knew I was already clocking up a day of over 50 kms. It was only the day after that I added in the height variables to discover that the reason my legs were a little flat on that day was that I had not only covered 45 horizontal kilometres, but also climbed over 1000 ms, yielding 55.6 kilometre equivalents for the day. I am very glad I didn’t know that before setting out, or I would never have trusted myself to get it in – at all, let alone in the light (which I managed – just).

I did know I was undertaking what looked like a big distance on the map, so set out in business-march mode, powering up the first very steep and quite long slope, making it to Lake Price in 48 minutes. I have always nicknamed the tributary at this spot (which is actually one of many tributaries of the Arm River) “Drink Creek”, as it is traditionally a spot for having a drink and letting a group gather all its members together after they have spread out during the climb. Some people take an hour ten, or more, to reach this point. But I was alone, part of no group, so was as free as a bird. I threw down a quick drink and was on my way.
The next twenty eight minutes took me to the high point on my track, which is a saddle overlooking the area of the Overland Trail, with excellent views to Mt Ossa, Pelion West, Pillinger and more. Light clouds decorated the mountains, but I could still see everything I wanted to, and delighted in it. How incredibly free I felt, to be able to go as far and as fast as I liked with nobody complaining. The silence was blissful (as long as you don’t count my singing, but I don’t listen to myself sing; I just do it as I walk. It is an expression of the song that is constantly in my head).

Already at this point, I had bumped into five people in two sub-groups, who had climbed Mt Pillinger to watch the dawn up there. I knew the father of the group: he was on Bruce’s staff at Church Grammar, and he and Bruce and other staff members had done an epic crossing of the Western Arthurs many years ago. I have never once seen this person around Launceston, but have bumped into him in the wilderness three times!
I made it to Pelion Hut just as the last people were leaving for whatever they were about to do that day. Three of them stayed to chat to me while I took a brief food break. The lights went on for one of them; he realised who I was and told me he follows both my blog and my instagram. It was such fun to meet them.
After the hut, there is a strip that took me over fifty minutes down to Froggy Flats and its crossing over the Forth River. That split felt shorter, as the scenery was so beautiful time whizzed by. Time did not whizz by for the next split, which looked much shorter on the map than it actually was, due to the many ins and outs the track makes to deviate from a direct path. Such diversions get smoothed out on the map. Also, it is an uphill stretch. I didn’t realise the extent of the climb until later when I examined a graph of my route. At last, however, I came to a creek, which on examination proved to be my much-awaited Pelion Creek. I confirmed by consulting my gps. There was a family group resting there. They asked where I was going, seeing’s I’d just turned from continuing straight ahead. I pointed into the shrubbery: “That way.”
“Oh”, they said, somewhat surprised. It hardly looked inviting. I explained there was a waterfall up there. They wished me well.

At last I was there. It had taken, so far, 4 hours and 40 minutes of concerted effort, and would take longer to get back, for sure. Was it worth it? OH YES. Not so much because it was the most beautiful waterfall on the planet, and certainly not because I could tick another box. A cynic could say that this was an example of the psychological phenomenon of Cognitive Dissonance Theory, whereby it is claimed that our brain invents justifications for the advantages of something that we have just invested a lot of time, energy or money into. There is good statistical backing for this. However, I just say that yes, it claimed a lot of work on my part, and that does make it special to me. Things that come cheaply are not valued as highly as things we have worked for. This waterfall will always remain special to me, because I gave so much to it, and it did not spurn me, but greeted me with ethereal, ephemeral beauty of wispy veils of delicate white mist, partly obscuring fresh, lush but rather diminutive pandani trees and masses of moss.

My only regret of the whole day was that I couldn’t spend hours there, but we are on the lean side of the equinox, and the sun would not allow me this luxury. Having hurried here, I now had to hurry back in a race against the dark.
My race did not proceed without several more lovely social happenings, however. The people I now passed wanted to know how the waterfall was; of course I had to tell them. Then, as I was passing Froggy Flats, I heard my name being called. It was a former school captain of Church Grammar, and thus old friend now. I could have spent hours catching up, but we had to agree to do so in Hobart later. We did a small bit there, and I got introduced to his family. He said he was just telling them that the very reason he was standing in that spot was because of Bruce and me. I felt very emotional about that. You help students, you introduce them to things you love, you share with them. When you hear that it has had a profound influence on their life, it is very meaningful, and it also sent me a pang of grief at the loss of my dear Bruce.

Back at Pelion Hut, and having a more substantial food break, someone I didn’t think I knew came rushing out of the hut, greeting me by name (and with a welcome hug). It turns out she was from the ABC and had done a recent interview with me when one of my photos had won third place in a big international photography competition. We had a lovely talk, and someone else from the hut brought me a cup of ginger and lemon tea. How fabulous is that (thanks Tyler)!
And so, now it was time for the final 2.5 hours of my stint … or longer. I was getting tired, and yes, it lasted 2 hrs 50, as my freshness was evaporating. This section was not without social interaction, as I met two more friendly people and, well, this is Tassie. When you meet someone in the bush you don’t just mutter hello and pass by; you interact, and I was no longer on the Overland section of the walk with its crowds of tourists. This bit isn’t in tour guides, so the people you meet are locals. Hoorah.
I felt confident that I would be back before dark, so was no longer hurrying. I’m glad I moved on when I did, however, as I got back to the car right at the end of the visible day. I now had a two-hour drive to undertake with full fatigue. For me, the dangers are not those of the bush, but those of the road on the way home.  I want to stay alive for my family, and also for my dog. If I died on the road, who would know to feed a waiting Tessie? So, I had arranged for my friend Evelyn to go and feed her should something happen to me. I gave her texts when I could to report progress. Meanwhile, my darling daughters chatted to me on the phone (hands free), partly to tell me about Easter, but also, I suspect, partly to help keep me awake at the danger end of a fabulous day.