My little orange tent, with Mt Manfred, the Guardians and Mt Gould (inter alia) in the background
I don’t think Goulds Sugarloaf is supposed to be an epic. I had thought of it as a rather easy catch … but that’s before I encountered the bands of scoparia that fortify the boundaries of Mt Cuvier – or of Coal Hill and the lower reaches of Little Sugarloaf, for that matter. The forest around Byron’s belly

These prickly soldiers are well armed, and not to be underestimated. My poor shorts-wearing friends are now battle scarred. I’m merely exhausted from all that pushing and shoving, bullying and poking that Richea scoparia is prone to necessitate. Mark and Angela climb the final rise on to Cuvier shelf.

That said, the magnificence of the Mt Cuvier shelf, the fun of snow climbing and the views from all five summits compensated in full. Day 1 was a rush. I’d walked this same stretch in December with LWC when we climbed Tramontane (see that blog entry for details), taking the 9 a.m. ferry and pitching tents as the sun sank at the terminus of a near summer-solstice day. This time there was no 9 a.m. ferry, so we had to settle for a midday departure, and the sun sets at around 6 p.m. at this time of year. We needed to match the LWC walking splits and take far fewer breaks than they took to get in before dark. We managed the five hours of heavy bush bashing spread over six and a quarter (hours), which included our lunch break, but that meant we only just made it before nightfall, cresting the final pinch that took us to the shelf as the sky turned pink and the mountains indigo. The white snow blotches shone like beacons; Byron glowed red, reflecting the dying embers of a glorious day as the sun sank below the jagged horizon. Looking towards Mt Cuvier from my tent spot early next morning

We had mirrored the route of the Tramontane track, except that wicked Sirens tempted us to climb northwards rather than remaining due west for an appropriate length of time, landing us in a sea of thick junk. Now at the top at last, we pitched our tents on the edge of the shelf with a million-dollar view, and gazed at eternity while boiling our billies for dinner. The wind whipped up, and we were pretty tired, so we all retired early. Cuvier a little later (but not much).

Day 2. After enjoying a magnificent sunrise and a relaxed breakfast – prelude to a day of very hard work – we packed our daypacks and were off, choosing to circumvent Cuvier on the way out and trust our luck at getting through the rather nasty scrub. It was alright, probably thanks to the fact that, being a wuss, I headed us for every single line of snow between camp and our destination: the ridge that comes down off Cuvier heading towards Coal Hill. “You love the snow,” commented Mark, as I headed us straight for another band. Now come on; the alternative was our friend Richy (richea scoparia for non Taswegians – a very prickly bush that hurts and destroys expensive clothing in a single kiss, as well. This poses a great dilemma when it’s raining and your goretex jacket cost you $450). Mark on a band of snow. You can see the ridge we’re aiming for ahead: where the two rocky knolls are.

It took us just short of an hour to be at the base extension of this ridge we’d been heading for, and we gazed with a little dismay over a flat section that looked far from inviting. We all imagined some pretty serious bush ahead. Angela voted to go under cover of the trees a little to the left; I voted to swing back further right for the forest there; Mark voted to go straight ahead through the open flats and get it over and done with. We generously handed him the lead, promising that he would never hear the end of our mocking mirth if he got it wrong. Luckily for his prevailing sanity, he got it perfectly right, and led us through the muck speedily and efficiently, and soon enough we were drinking from a little tarn at the far end. Absurdly, I was already desperate for lunch, but it wasn’t yet even morning tea time. I stole a quick bite of lunch anyway. Off we set up the last slope between us and the first of our mountains for the day: Coal Hill. The forest had no wicked reputation that we knew of, and we sanguinely assessed its difficulty as minimal, believing we’d be celebrating the first summit in a very short space of time. Ha. Fooled. Almost imprisoned in a life sentence of immobilising junk, we made scant progress to penetrate our way out to the other side. It was a tough battle, but we fought well and eventually won. At last we could claim our first peak, and could see our goal for the day drawing nearer. The land that lay between looked completely benign. You can see it in the photo below – walk in the park stuff. Tricked again. Angela eagerly arriving at the first summit: Coal Hill. Goulds Sugarloaf and Little Sugarloaf are on the horizon back right.

Someone forgot to mention the band of scoparia that separates Coal Hill from Little Sugarloaf. However, with our carrot literally dancing before our eyes, we determinedly pushed through obstacles, winning all small skirmishes, and were soon enjoying a marvellous snow climb, harbinger to the summit of mountain number two: Little Sugarloaf. And in less than half an hour from that, we were victoriously standing on top of our goal for the day: Goulds Sugarloaf. It wasn’t yet lunchtime, but I was positively ravenous, and it was only the thought of lunch on top that had given me momentum for the final climb. I began stuffing my face long before I bothered touching the summit cairn. It was amazingly peaceful sitting up there gazing out at the cornucopia of mountains all around, each one blotched with remnants of snow to enhance its beauty. The only marring factor was that we had taken 3.5 hours to get there, and could count on at least that many hours of hard bush fighting for our return. I scanned the horizon for a friendly helicopter but, with none materialising, off we set stoically to undo the distance we had done. 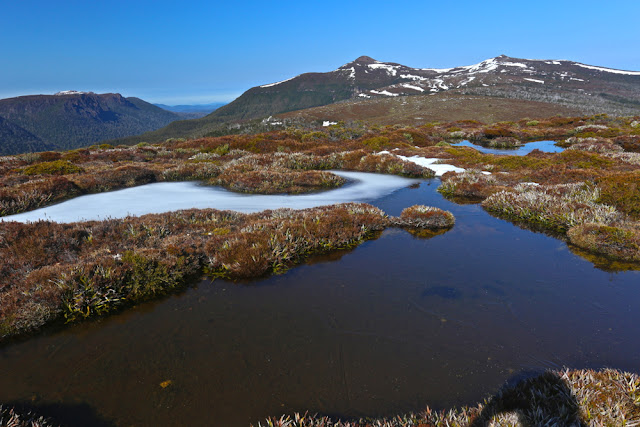 Icy tarns and pleasant walking in this (small) section of the route.

We managed to find more horrid prickles and walls of fierce scrub on the way home somehow. Timewise, this was compensated for by some very fast snow slides, especially off Little Sugarloaf. I had fun kind of ski-skating down in giant strides. Angela adopted the enjoyable method of a bum slide, leaving smooth marks in the snow as if a wombat had tumbled down the slope. Mark opted for a more conservative method of descent. All methods worked well. Our faces glowed with pleasure as we looked at the three sets of tracks in the snow that we had left behind. A moat protecting Little Sugarloaf
Once we got back as far as the base of Cuvier, even though we suspected it would take longer, we decided in favour of climbing over the mountain on rocks rather than going around though the bush. Besides, Angela hadn’t yet summitted Cuvier. Unfortunately, however, it was on the approach to this mountain that she decided to do a spot of research for a book she has in the pipelines: Mountains to Spew on. Bound to be a best seller. She has quite an interesting collection of mountains in her portfolio thus far, her migraines helping to provide occasion for her data.

Stunningly, despite her research schedule, she pushed on valiantly to the top, never slowing her pace. I can’t begin to imagine walking with a migraine. She is an incredibly brave person. While I was noting my extreme hunger, she had lost all her calories from lunch, yet was still walking well. This is beyond my capabilities, such as they are. I swallowed some more honey and nut bar to help her along vicariously. Mark rearranges the summit cairn on Goulds Sugarloaf before taking a break to snack. Mark nearing the top of Cuvier. Cuvier summit. Mountain number four for the day. It’s all downhill from here. The slopes of Cuvier. This is what I call fun.

This time we arrived back at the tents in plenty of time to relax before dark. Unfortunately, the strong and biting wind that had arrived as the day wore on drove us into our own little tentspace. I reclined in my wonderful shelter, propped up from behind by my rucksack, my vestibule “awning” up, and stared out through my feet at the sublimity stretched before me, slaking my appetite with soup, and then hanging in there until legitimate dinner time (6pm). Day 3. If scoparia bands don’t count as events, then day 3 was uneventful. We managed to find faster routes through the scrub than on day one, so arrived in good time at the base of Byron. This time, as with Cuvier, we voted for “up and over”. It was very, very steep going up – at times it felt like vertical – but I personally find this far more relaxing and enjoyable than fighting bush.

All you had to do was grab roots or trunks and haul yourself up, rising with each pull  through glorious rainforest. Climbing is fun. Soon we were at the rocks which marked the base of the final palisade of Byron. We dumped our packs once we’d intersected with the cairned route that approaches Byron from the Gap and we were at the top in a mere eight minutes. Angela and Mark set out, day 3. Hoorah. Angela leaps to summit number five of our route: Mt Byron. GSL, LSL, Coal Hill and Cuvier are in the distance behind her.
We munched on muesli bars to savour our view for longer, and then went on our way, eager to be back at Narcissus to ensure our place on the boat. We arrived with an hour to spare, having dined on Byron Gap once we’d rejoined a real track. How very relaxing. And now, at Narcissus, our work was done. We slumped on the verandah of the hut, staring at the creek through the gum trees for a while, and then sauntered down to the jetty to stare at the lake and chat to a happy group of OT walkers whilst listening for the sound of an approaching motor. Peace. Contentment. Pleasant exhaustion.