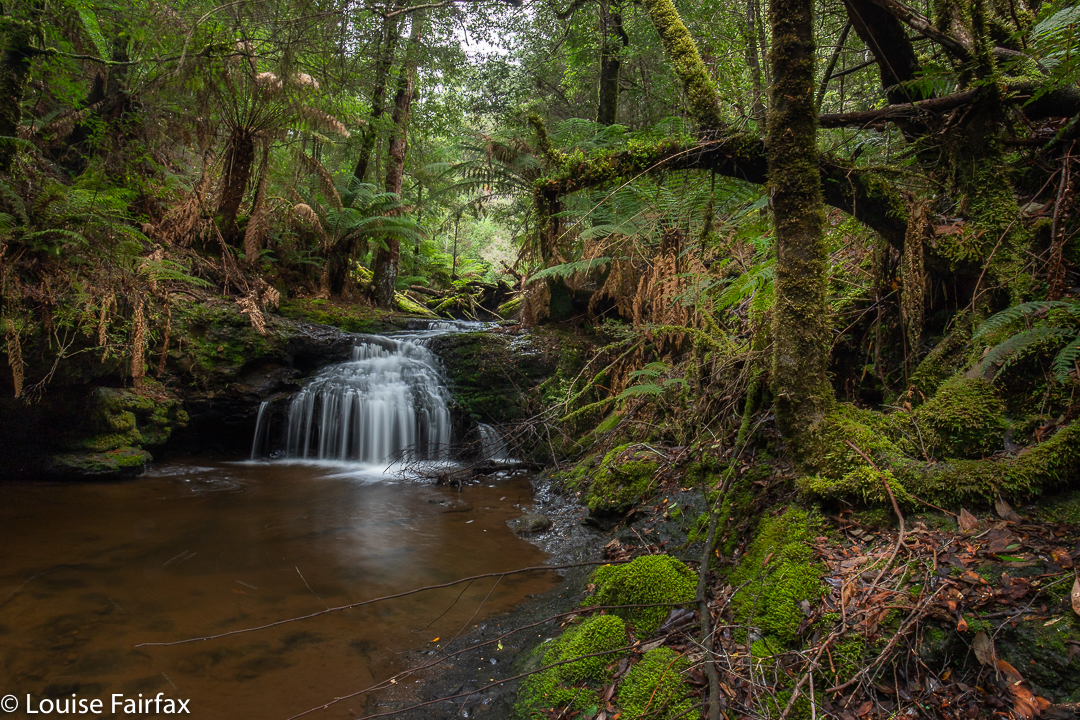 As I set out for home heading west, the Hellyer Tributary Falls were only one of several options in my mind, but somewhere along my journey, I decided it was the one for the day. I had researched these falls a short while ago, and thought I had the information in my phone.

Alas, when I parked and went to retrieve the exact location of these falls, I discovered the area has no mobile coverage, and that I thus couldn’t open the message that contained their whereabouts. I was faced with three little tributaries, any one of which could contain the object of my quest.

I thought I remembered them being on the right hand one, but was not at all confident. Off I set through magically lush forest. At first there was a pad, and some pink ribbons, but I got dumped by both, and forged my own way along the creek. After 14 minutes, I came to a nice little cascade, which I photographed (now called retrospectively, Falls F in the group, just for those counting), and another few minutes beyond that, reached the double waterfall (that I have now labelled “falls D and E”), depicted below. I loved the second of this duo-drop.

Were they the falls I was actually seeking? They didn’t really quite fit my memory, so I was unsure and pushed on. The river became very choked at this stage. I went to where I had a bit of a view ahead, which contained no falls, so decided that either what I had photographed was my goal, or that the falls lay on the right fork of the other offshoot. I took a higher route through the forest to go a bit further, and explored for a bit, but that creek was very cluttered with fallen rubbish, so turned around at that point.

I had seen lots of fungi, so decided I would prefer to photograph fungi in my remaining time than flounder around searching for something when I had insufficient information. The fungi were fabulous: my favourites: mycena interrupta. But oh, they are so winzy small that they are very challenging to shoot. Ini the mud I rolled, providing excellent fodder for investigative leeches.

After I finished and had set out for home, I once more entered mobile land, and was able to see my original hunch was correct, but that I hadn’t, in fact, gone far enough, and that the falls I really wanted were higher up: hence my label of the ones I did find as “D, E and F”. At that stage I felt satisfied with my catch for the day and continued the drive home. I have saved other treats for a later occasion. (Obviously, from the lettering, you can see that I found  lot more later.)