Mt King William 1  Jun 2014.
The weather looked as if it would clear, as promised and then rescinded by BoM, so I took a punt on climbing Mt King William 1, another peak not yet summited, but one continually beckoning me. I would also take in Mulligan’s Peak and Mt Pitt if the weather cleared. It didn’t. The route began along a “road”, but as it was a heavily potholed, trickling-streamed, fungi-growing and boom-gated way, I did not feel threatened by the prospect of traffic. Instead, I enjoyed the feast of white and soft-grey trunked eucalypts set against mustard-coloured button grass and mossy green rocks. My mountain was not yet in sight. Mist was. There was plenty of beauty to entertain. 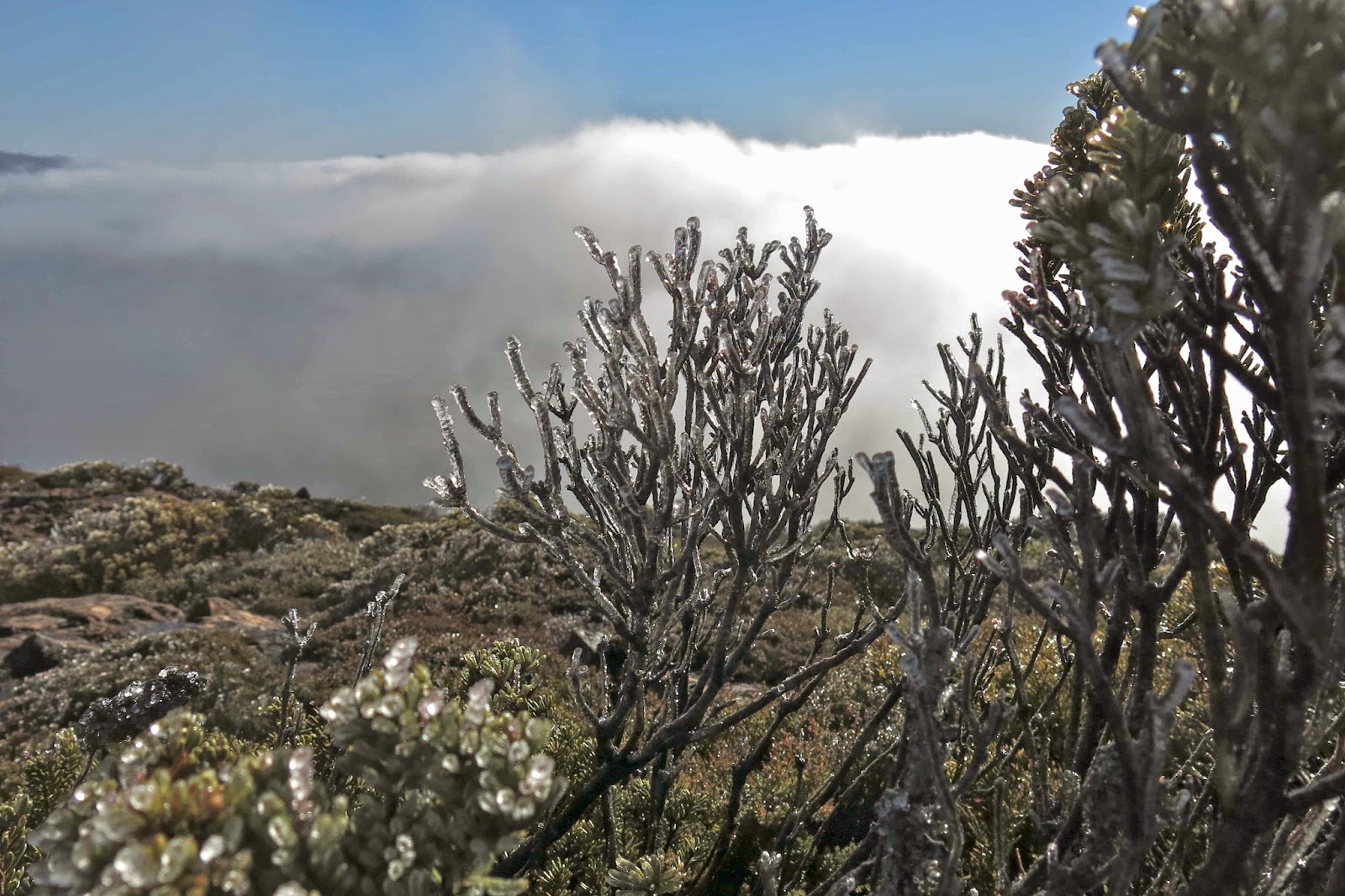 Up I climbed (almost imperceptibly; this was not a steep path). After 35 mins, I came to a flat, open section, and gained my first view of the elusive object of my quest, dressed for now in a diaphanous negligee that was being slowly cast off. Dolerite columns were visible yet also obscured, floating in the soft lace. It was a pleasing view. A bit further on, I found and signed the logbook, wondered why you’d stick a book nearly an hour along the track and not at the start, and kept climbing. The top still seemed a long way off – maybe an hour, I thought from there. I was totally shocked when after 23 minutes I took the next step to come almost face to face with moon equipment. There must be some mistake. Was this another false summit like yesterday? No. It was the real thing, and the rocks up there were covered in a sheet of “black ice”, an unofficial skating rink with heavy penalties for misjudgement. Crystals of ice adorned all shrubbery and shone startlingly white against the darker rock or sky. I clutched sharper sections to stabilise myself, but they were too slippery even for hands. I resorted to virtually crawling around up there for safety. The clouds were rising, thickly this time. Mulligan’s Peak came and went, but in the brief period of visibility, she looked to be a perilous route at this distance. Certainly straight ahead you seemed to be required to nose dive over an ice cliff. I didn’t like the idea of climbing in these conditions, so had a little snack and began a reluctant descent, back to my car. That night I would spend an amazingly cold night on Mt Rufus (see separate post)