Carr Villa
It is my opinion that if you receive an email inviting you to come and play in the snow then you can count yourself amongst the Lucky. I thus consider myself to be a very fortunate person, as such an invitation is exactly what arrived in my inbox. I was the only invitee who could accept, so it was a party zu zweit. We had only half an idea of what conditions would be like on top of Ben Lomond, our destination, so each selected a variety of play tools. I took 6-point crampons and my Grivel spiders, as well as short XC skis and poles. Phil, the initiator of the expedition, took very short skis and walking poles for us both, and spiral-wire shoe chains as his chosen anti-slip device. Once we could see the vast amounts of ice around Carr Villa, it was obvious that walking without either crampons or pseudo ones was out of the question (I nearly went for a sixer just crossing a 2-metre band of ice before we’d begun). There was not enough snow for real XC skis, but we might have enough for the little ones up higher where we were climbing. We both took them in case. I kept trying to work out what it is that makes rocks covered in a light dusting of white powder so very appealing, but never came up with an explanation that satisfied me: all I can do is talk of the observable outcome, viz., the fact that most of us find rocks with a soft, finely textured layer of white, delicately poised on the uppermost surface, to be a glorious sight. As often as possible, I zapped out my camera and took a few shots. In my haste (I didn’t want to delay things with too much photography) I barely had time to notice if my efforts resulted in a photo that would later please me, but the attempts were fun anyway. Up higher, the landscape was almost totally white, but it still retained moments of colour from the underside of bushes and twigs, or the sunny side of rocks. The scenery was spectacular, especially as we were lucky enough to have soft blue sky as a background, and sun to give lustre to the snow. Blue and white: the well-chosen colours of the Greek flag. These are also the colours of our east coast beaches that I love so much. It’s always a combination that pleases me. Phil going up a shallow gully At first we followed the path from Carr Villa up towards Legge’s Tor, but at some magical point hived off and headed to the right towards Borrowdale Valley and Old Bill’s Monument. I have never walked with poles before, but found the combination of spiders on my boots and poles to help propel me forwards felt like cross country skiing without the forward slide each step, and I enjoyed the exercise as well as the scenery. Once nearer to the monument, we climbed a few lumps on the terrain which were, I was told, nameless, so I christened them, at least momentarily, Phil’s lump 1 and II. As Phil is the first person to have climbed all the Abels and all the Abelettes, he deserves something named after him. We were basically just playing up there, enjoying the beautiful white scenery and the fun of movement in it. Phil’s lump II (which had two separate summit cairns) had a view way down into the green valley below, past the rocky organ pipes and piles of broken rock that formed chutes between the top and bottom. Phil indicated his chosen descent chute and we began our way down, keen at this stage to get out of the biting wind. That second lump was high enough to feel the brunt of the cold blast. 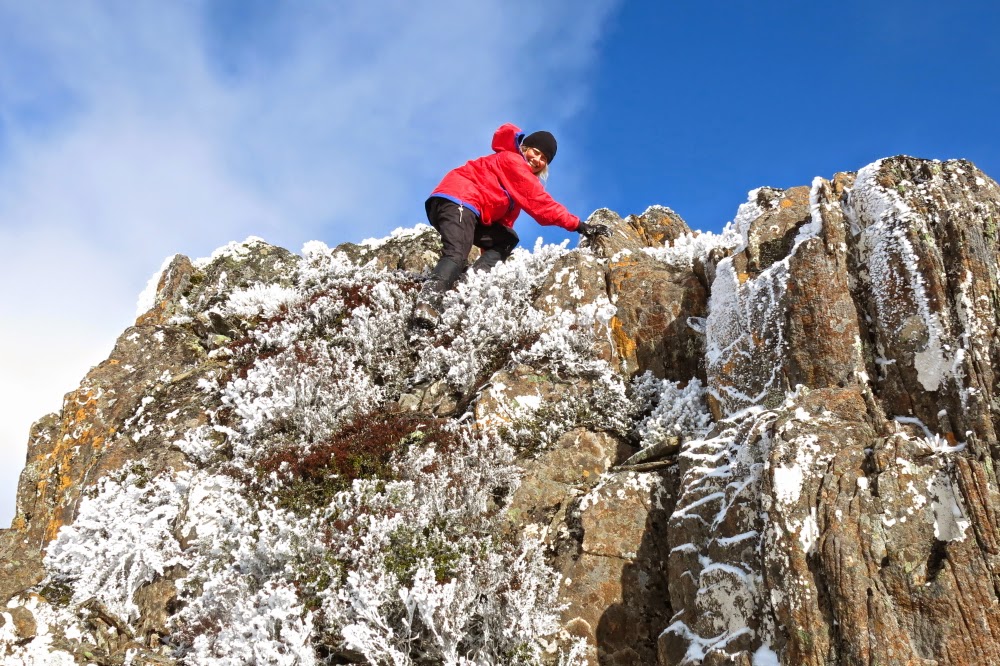 Nearly at the top of the lump. The descent and the long traverse across the bottom to the car were much slower than the dance up onto, and then along, the plateau. We had to be very careful on all the jagged rocks that presented a line or point rather than a plane to the foot and that each harboured its own little ice-snow cap. I was too scared to risk jumping, and kept up four limb points of contact for two (or was it more?) hours of the traverse. Some people pay vast amounts of money to go to the gym. We had a mega full-body work out and paid nothing if you don’t count the foot gear that has served us often and will continue to do so in the future. Phil’s lump II (one of the summit cairns) Phil with the other cairn behind him
I returned home tired and with a good appetite for the delicious food Bruce had decided to cook in my absence. The only negative was that I now had to quickly dry my gear so I could have similar fun the next day down south with my Pandani friends. I was a going to do the long drive that night, but now opted for setting the alarm for 3.30 next morning instead. The hot shower felt very good.