We had not set out intending to climb Mt Emmett on this trip: instead, Mts Inglis and Proteus were on our agenda. However, the dismal weather forecast had us altering our plans. The worst day was to be our second one, so it was decided that we’d only go as far as Scott-Kilvert hut, behind Cradle Mountain, on the first day (instead of to the tarn on the moorland past the belly of Barn Bluff), and see just how much rain was going to fall thereafter before we finalised Plan B. Day two was as bad as predicted, so the new plan was to climb Mt Emmett on this day, and then move to a better location for attacking Inglis the next one. 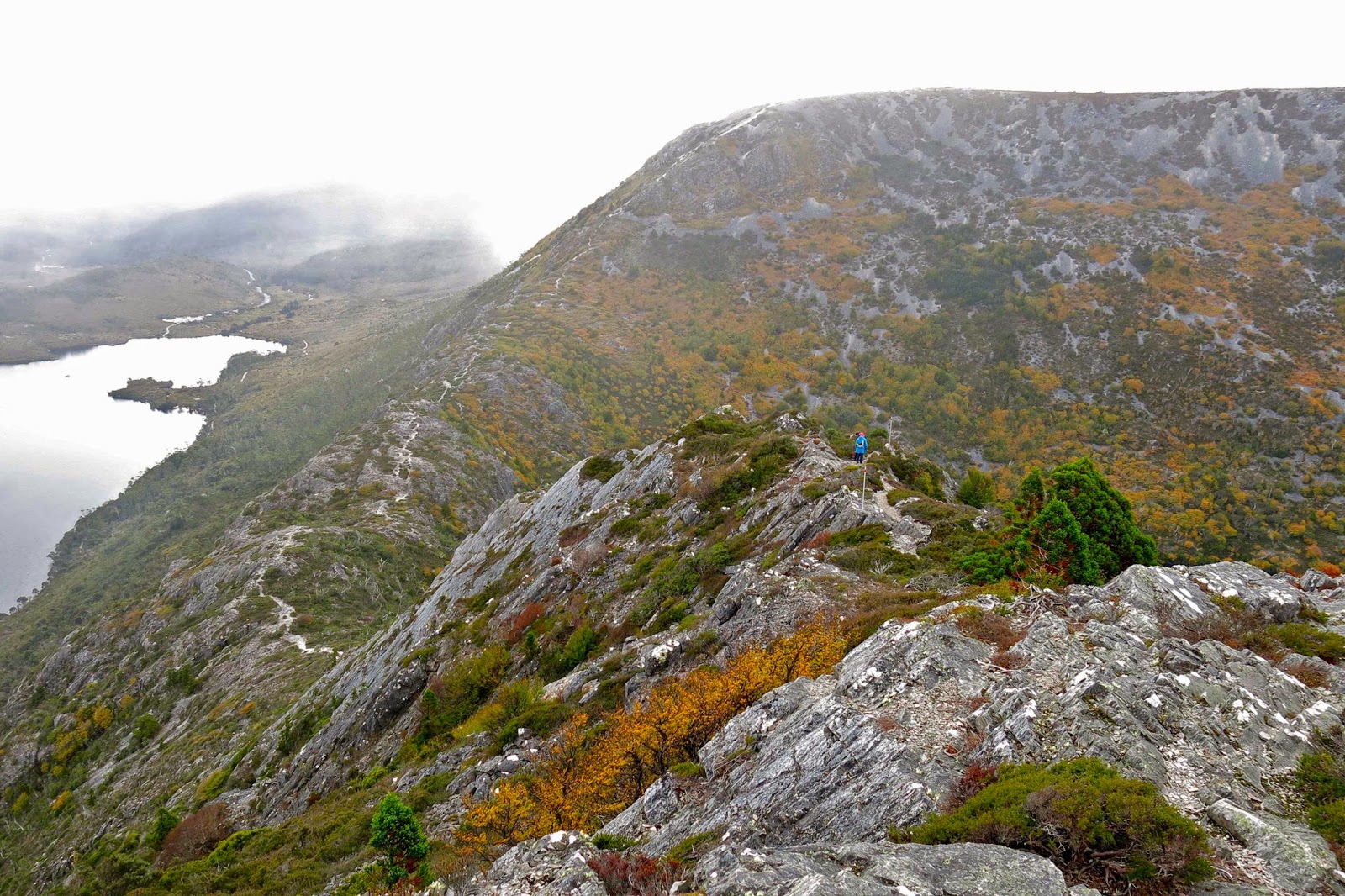 To the average person, Mt Emmett is not a name that means a lot. If you get out the appropriate map, you’ll find it sitting beside Cradle Mountain, minding its own business, looking nice and harmless as a bunch of smooth brown elliptical lines. When seen from the Cirque between Cradle and Waterfall Valley hut, it looks like a nicely rounded and gentle scree slope, much like many of the English Fells that you can dash up at a run. Before I knew better, I had once planned on sleeping on the top. 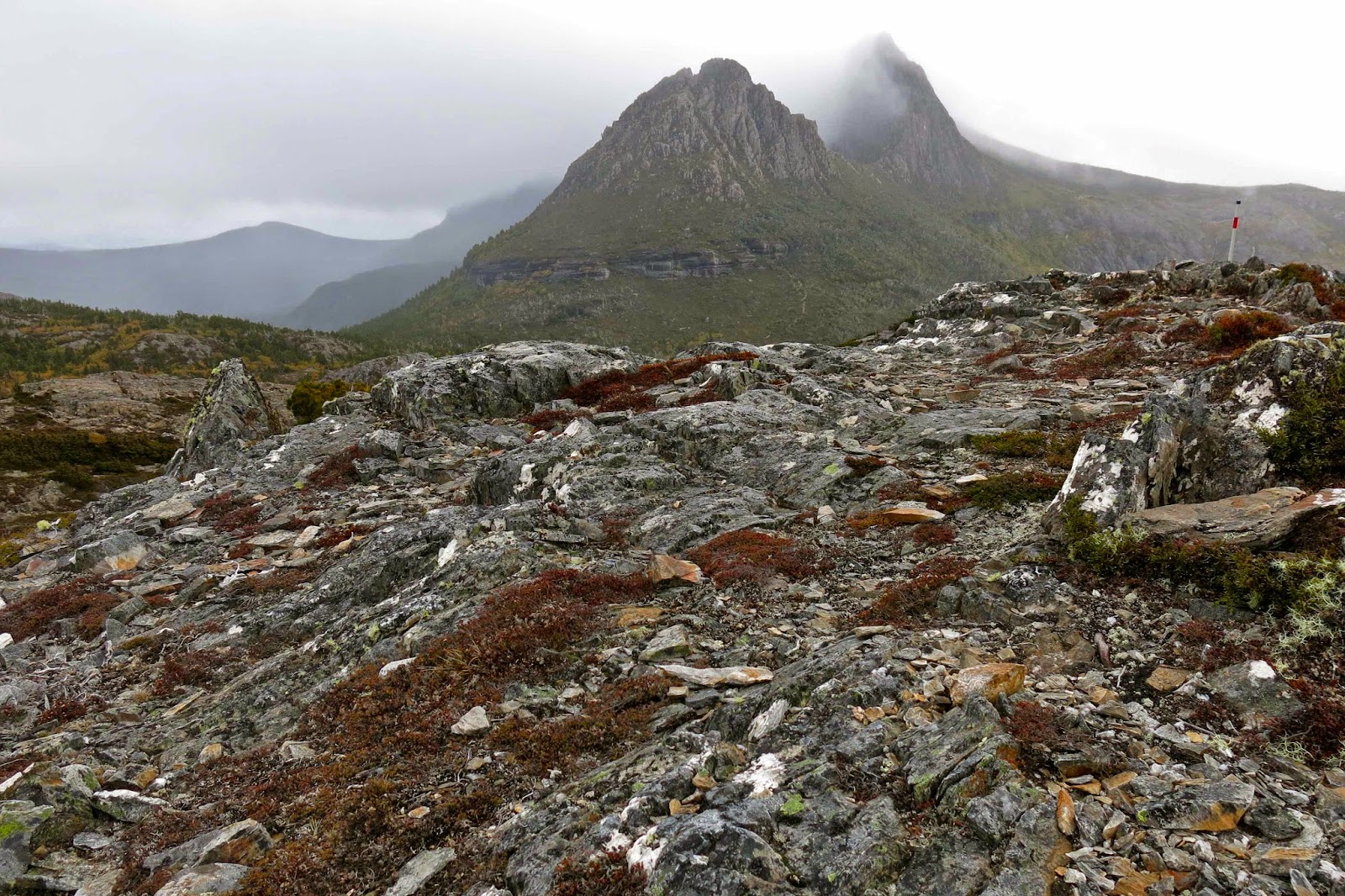 Cradle from Hanson’s Peak
Unfortunately, the reality of this cozening deluder is that this is a mountain of angular boulder rubble, which could have been part of some story of angry gods throwing fridge-sized stone missiles at enemies and then cursing them so that they became covered in slimy black moss to destroy any approach efforts of hapless humans. We had already had one failed attempt on this mountain, admittedly due to snow (see my other Emmett entry: http://www.natureloverswalks.com/mt-emmett/ ) and I had not entertained the notion of taking my husband with Parkinson’s disease back there. My plan was to do it in summer on a nice dry day (without him), probably solo as this is not a popular mountain that anyone I know volunteers to do twice. However, the group was doing it in the rain, and my husband said he could do it too. Should a wife tell her husband he’s mistaken and make him stay behind for his own safety and the good of the group? (He laughed and said “Yes” when I read him that sentence.) “Not this time; not yet,” was the equivocating conclusion I came to after long reflection during the night as I listened to the insistent rain. The moist mist swirled around as we left the hut the next day. We had elected to camp the previous night rather than stay in the hut, so were lugging a wet tent up the slope, but we love our tent, so that’s OK. I stayed at the back of the train, observing my husband’s progress, trying to read from his movement whether I should exercise some power of veto here. I was genuinely worried about this mountain – but again I let him have the call, not wanting to cramp his style with my own anxieties for his safety. Laccaria sp near our tent

Even highly competent and experienced walkers find Emmett with a water film over the slime to be a challenge (see rockmonkey’s blog) but we nonetheless set out over the slippery rocks that presented a line rather than a flat plane as their uppermost surface. I hoped that if Bruce ran into trouble, it would be in the first hundred metres to enable an easy exit. He seemed to be coping as well as some of the others in the group, and as he often goes much better if I’m not there as a backstop, I went on ahead, having fun crabbing my way on all fours across the slippery obstacle course, whilst checking behind at regular intervals to make sure he was coming, though the thick mist meant that, at best, I could see people who could see people who could report that he was progressing steadily. Deceptive Mt Emmett from the Cradle Cirque next day

There were no commanding views to be had in the fog that day, but the best view for me was that of my husband approaching the summit of what I thought was his most challenging mountain yet. Bravo B. It snowed lightly (sleet really) before we began our descent. The weather was so bad I had not even bothered to bring my camera to the top; I have plenty enough photos of people in a grey, obnubilating veil labelled as this or that peak. The trip down was as careful as the ascent had been and we all got there uninjured, picked up the heavy packs that we’d deposited in the Cradle-Emmett saddle, and made our way further on to Waterfall Valley hut where we could attempt to dry out our sodden gear before the next day’s demanding adventure (see natureloverswalks.com/mt-inglis/).