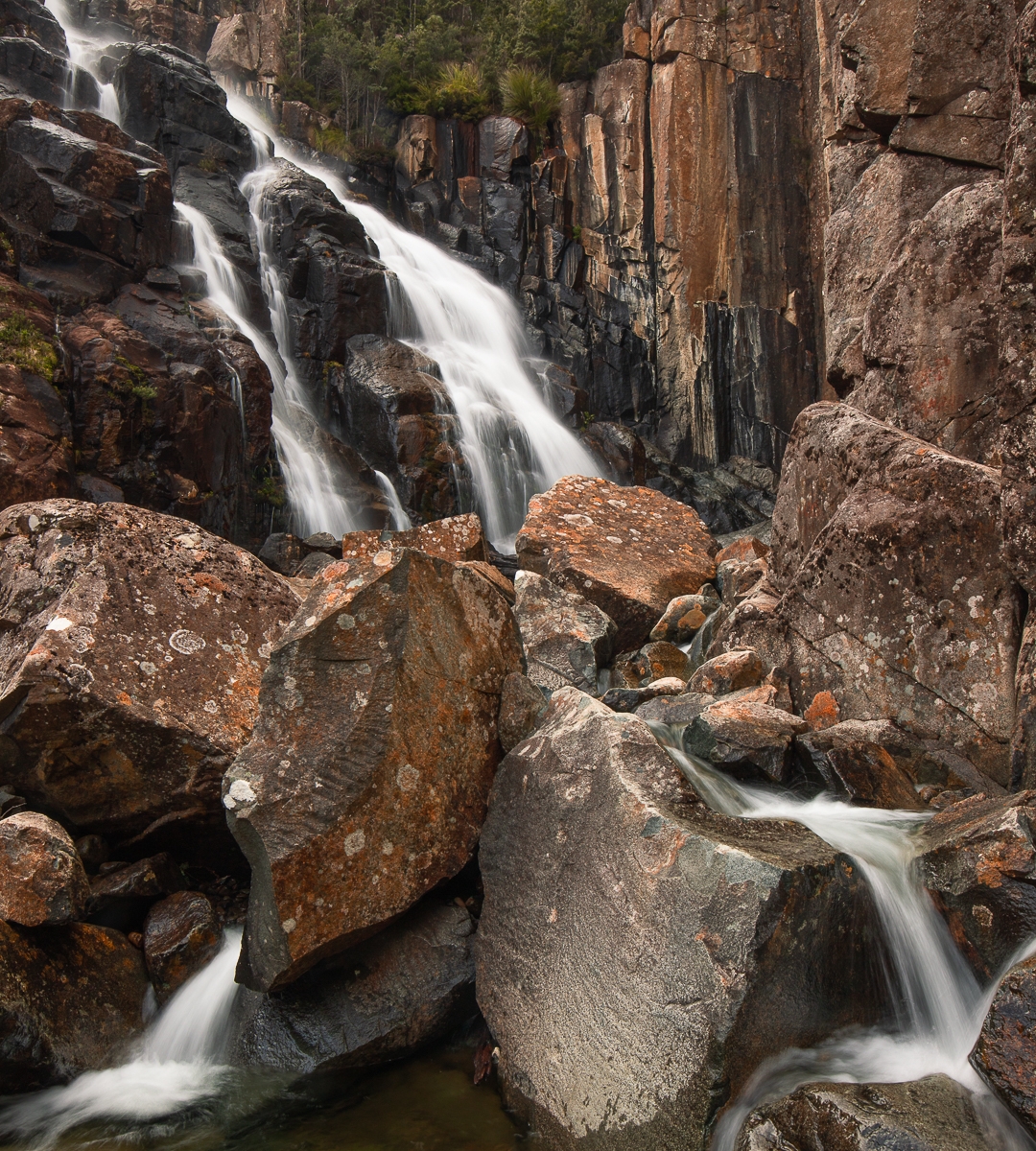 Prior to a few months ago, I had not seen or heard anything to tempt me to make the long and not-very-comfortable trip to Wellington Falls, on the “rear” slopes of Mt Wellington. However, a few months ago, I saw a lovely image by Bjorn Baklien that showed me the falls could look appealing. I awaited the opportunity for a day when I had a lot of time and felt like a very long walk, as I took into consideration the fact that the advertised signage indicates that this is a 7-hour trek.  The distance looked big on the map, and I knew from my visit to Disappearing Tarn (en route) that the footy-sized and shaped boulders that litter the way are not “marching” territory, and have to be treated with respect if one doesn’t want to twist an ankle.

Luckily, the reality was way, way better than my expectations. Firstly, I took a shade less than 1 hr 45 in each direction, thus halving the time I had allocated. Secondly, I didn’t know in advance, but by Disappearing Tarn, I had essentially done all the footy-stones bit. The actual Potato Fields, which I was NOT looking forward to, were easy in comparison, as the rocks were larger, and very stable. In fact, today everything was easy, as the rocks were dry, and none of them moved under me. Possibly the worst aspect was that I saw my first snake of the season, underfoot where I was about to tread. I informed Mr Snake that it was only September and he should go back into hibernation. I guess he had come up from Snake Plains, as he was just after that turn off.

So, here’s how it all took shape: Having driven down from Launceston that morning, I went straight to The Springs, and parked at the “higher” carpark, the one just after the road divides in that area. I walked on the Pinnacle Track steeply uphill for a mere 2 minutes, after which it was time to turn onto the pretty flat Milles Track, which I followed to the left (initially SSW but then swinging nearer west) for 28 minutes, when the Snake Plain track joined the path from the left (south). Along that Milles Track section, I enjoyed fabulous views (although a little hazy, so not worth photographing, but definitely worth imbibing) out over Hobart City far below to the expansive blue waters and hills beyond.

A further 26 minutes of the worst part of the track – through dry forest with the footy stones underneath – saw me arrive at Disappearing Tarn, from whence the track climbed upwards through the equally dry Potato Fields (but totally firm and easy underfoot), and then entered a delightful grove of Richea dracophylla, with masses of rich brown leaves underfoot and mossy rocks. The final few minutes involved a steep descent to an intersection below, above Wellington falls with tracks coming in from other directions (one from the Pipeline Track, well below on that side, and the other from the Cathedral Rock area in that circuit, across the river). Not far from there is a side track to a lookout over the falls. I stopped my watch (1 hr 44), and then just took my time, descending to the very base of the falls, and inspecting various rocky outcrops for photographic possibilities.

The way back took in total the same amount of time as the way there, although the splits had different values due to different inclinations in the opposite direction. I had lunch in the Tavern at Fern Tree, coffee down lower at Ginger Brown, and was finished everything (i.e., all the eating) by exactly 3pm, school pick up time.