The steps are big when you’re three

This weekend was my birthday, and it was my birthday wish that we have a family weekend at Cradle Mountain, and that we see if Gussy could climb Mt Campbell. I also wanted to climb Mt Kate with at least one of my daughters (and, considering babysitting duties, it would probably only be one), and to see Guss’s delight at his first huge smorgasbord breakfast (he being a gourmet in midget disguise). I hoped to show him wonderful animals and beautiful forest, but these things were secondary to the other wishes. No wonder he was hungry by the saddle

Little Gussy has been to the summit of quite a few Tasmanian mountains, but he’d hitched a ride in a sling or papoose. I wanted him to actually climb his first peak, and I wanted that peak to be an Abel for sentimental reasons. Trying his hand at a spot of off-track In planning, I tired to view Mt Campbell through three-year-old eyes in order not to over-tax him. It didn’t seem too steep or too demanding or too long (as an athlete, I’d run from carpark to top in 20 minutes, so regard it as a pimple). I awaited the weekend to see if it would work. Whilst Campbell seems to me just a nice mole hill, something you can run up in a jiffy, from the height and musculature of a three-year old, it is actually quite daunting. I saw Campbell through different eyes this day.
Guss needed a rest by the first saddle, which he took 32 minutes to reach. I think some walking club groups might take that long. He was doing well. His appetite in that protected bowl with a lake out each side was prodigious – he ate a salad roll, wallaby bites and shortbreads. The climb thus far had obviously worked up an appetite. Tummies full again, off we set. He made it to the top in a shade under 60 minutes from the saddle, which included another much-needed, yet short, food break at a lookout rock maybe half way. At the end of the steep section, but before the summit, he plonked down on the ground, ready for more food treats. I thought he’d had enough. Yelena wanted to touch the summit, so I suggested she go there while we stayed with Guss. “No,” he said, “I just need food and then I can touch the summit.” I was surprised and thrilled – thrilled that it was his own initiative to actually complete the job to the end. He’d done the climb. In many people’s books he could be said to have climbed Mt Campbell already, considering he was about two vertical metres below the summit; he had the summit view, and had gained considerable height, but he knew the real top is where the cairn is, and wanted to be there. 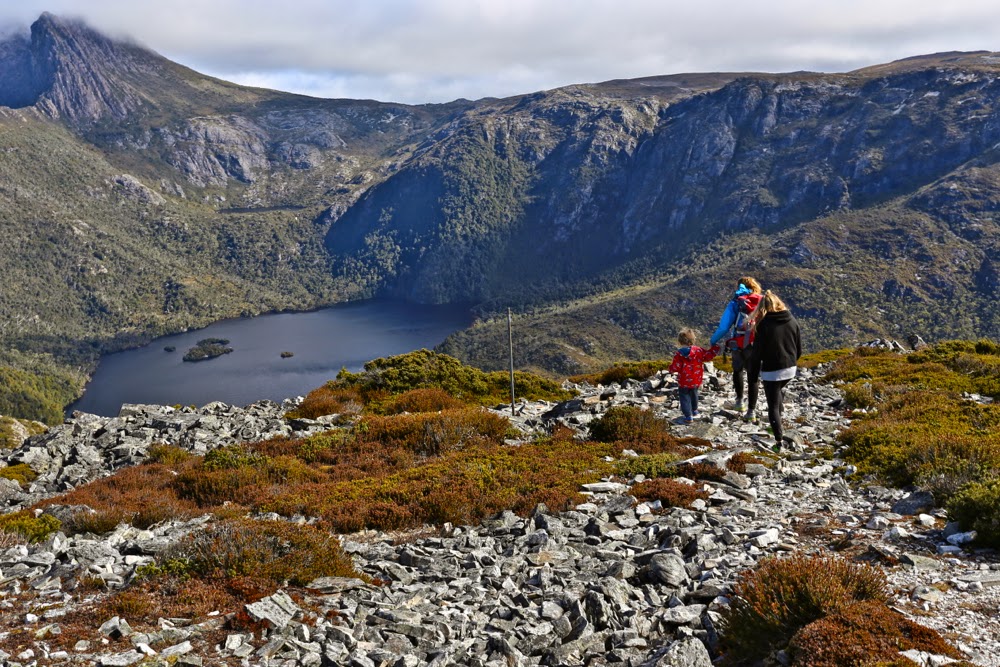 The long trip down begins
In my calculations and imaginings about whether he could do this climb, I had never considered the way down, assuming the difficult part would be the exertion of the ascent. However, job done, summit achieved, little Gussy had had enough. He wanted a cuddle – continuous cuddle – and he wanted that cuddle to be with mummy. Have you ever tried descending a very steep slope with a wriggling 19.5 kg mass half obscuring the path ahead? I had thought Mt Campbell was a toddler-suitable mountain. I realised as we descended that it was not. It is only because my daughter is an exceptionally strong and capable sportswoman that she managed to descend that slope with a tired child wrapped around her. (She was also, at this stage, pregnant with number two). He was unnerved by the angle of the drop and by the way the scree gave way under his feet. At several points we had to pass him down as in a pack haul. Once he was at the saddle again, however, he cheered up (more muesli bars and chocolate), and made it to the end with the promise of being allowed to throw stones in the lake to lure him ever onward. The final hundred metres was done almost at a trot. Any time since, when asked if he liked climbing his mountain, the answer has been an unequivocal “yes”.