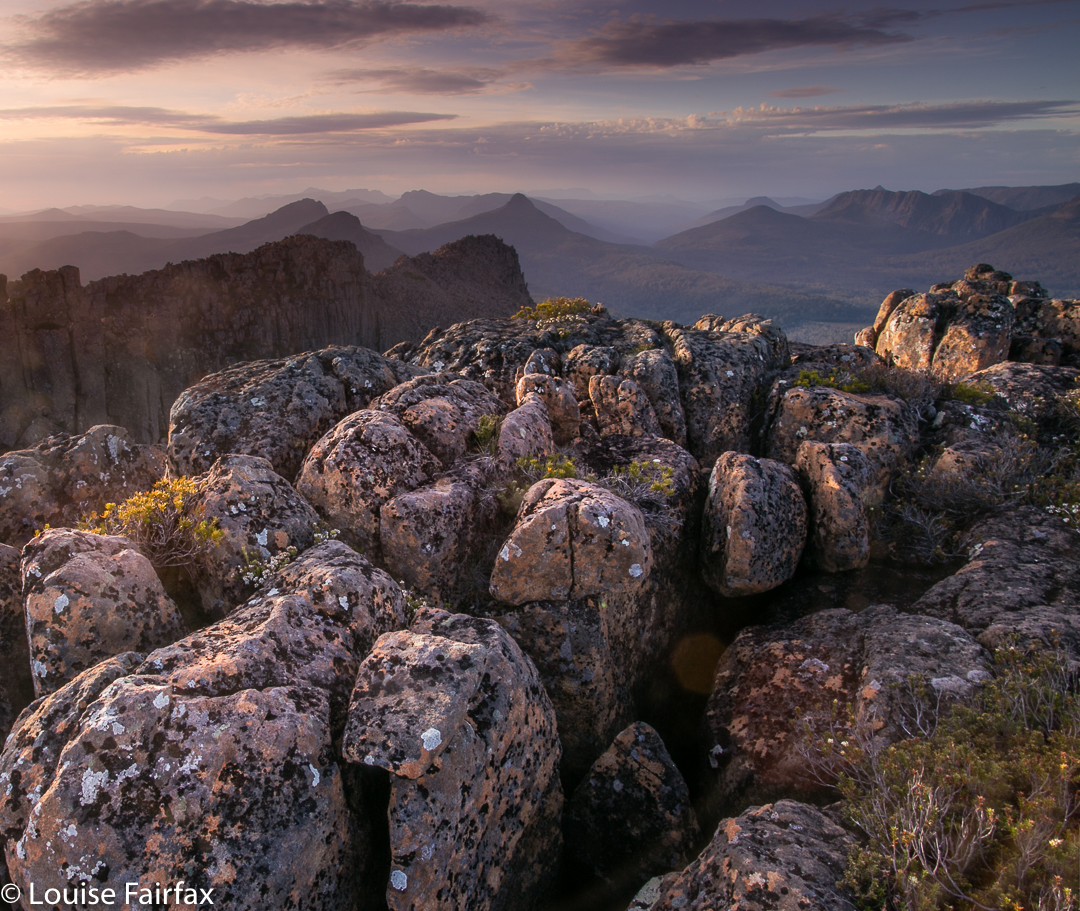 I was still an undergraduate when I had my first glimpse of Mt Olympus while doing the Overland Track with my husband. It was love at first sight: it looked so impressive and imposing perched up there above Lake St Clair. “What a view it must have from the top,” I thought to myself. Time went by; we finished our degrees, had children and moved to Tasmania. And one of the first things we did with our daughters in their new state was to walk the Overland Track. I have a photo of them excitedly running in the direction of Mt Olympus (they seemed to finish every day running with excitement. They were aged 6 and 8 and adored the trail). Each time I have done the track (6 so far), or been in the area, I have wondered about the view from the summit, and have wanted to sleep up there. Last weekend I got my wish. Maybe three-quarters of the way up Lamonts Lookout 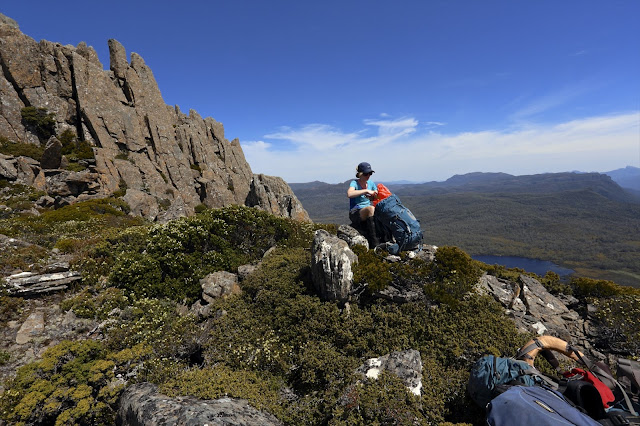 Day 1 was hot, and I love being warm. I was anticipating another wonderful balmy night on our summit. To be on top of a Tasmanian mountain in mild conditions is one of life’s supreme treats: gazing out at the foison of indigo peaks set against the evening sky, whatever its colour that night: peace, sublimity, vastness and wonder. Rest for my soul. We caught the ferry down the sparkling lake, and began our climb to Byron Gap, along the pad that leads through the fabulous rainforest. All the creeks were running and we drank plentifully from their cool, refreshing waters before popping out at the Gap itself, where we had lunch gazing at the seemingly ubiquitous Frenchman and his beret. Paul resting amongst the rocks on the final climb

Now it was time to depart the quasi-track and climb steeply through the obligatory band of scrub, complete with scoparia that was sparingly in flower, but the red of which gave a quite Christmassy feel to the scene, and on, higher, to Lamonts Lookout, a rocky perch with a grand view. More rocks, more traversing, a bit more climbing and there at last was the summit cairn. The wind picked up mildly as we breasted the final rise, but nothing to cause concern.

We dropped a few metres to the verdant green spread below and chose our spots – a tarn or two to each person, right at the tent door if we wished, and views to dream about. I chose an angle that included a gaze that embraced most of the mountains I love from the Overland Track region. I could discern everything from Pelion West south. Heaps of friends there! Over dinner, Paul recounted a time when someone once asked him: “What mountain is that?”, to which his reply was: “I don’t know, but I’ve climbed it.” (He has climbed every Abel and every mountain worth a point on the peak baggers’ list.) I have not climbed as many peaks as he has, but have amassed enough to understand how it must feel, as when I look at the skyline these days, it full of mountains whose moods and intimacies I know. I have climbed every Wainwright in England, so I do know how satisfying completion feels. I photographed the sunset out on a perch, my tripod anchored. It was a bit breezy, but nothing to make life tricky. Our tents flapped rather noisily, but nothing in our purview bespoke danger. No one suggested retreating, although everyone agreed we could be in for a noisy night until the wind abated. Far from receding as predicted, however, the wind intensified as the night progressed, constantly changing direction, and often making the fabric crack like a whip as it lashed in a new tack. I had tightened everything before turning in, but by midnight, had to get up and redo each peg and guy rope.

At 2 a.m., the lashing was so violent I had to get my head torch and go outside to examine what was happening. The fly had filled with air like a spinnaker, and had lifted the pegs out of the ground. They had been hurled into space and were not to be found. I tried to find rocks to provide stabilising anchors, but the wind made mincemeat of that. As fast as I attached a loop to a rock, the wind just filled the fly and it rose, tossing off its rock as if it were a ping pong ball (although they were rugby rocks). I placed the few pegs that were left into key positions and retreated.

Unfortunately, this needed repeating at quarter-hourly intervals, from then until nearly 3.20, when conditions changed. By this time I had lost an absurd number of pegs, and rain now started. The wind intensified even further. The fly flapped and banged, a wild thing; I was lifted from the ground with each gust as my moorings were gone. I wondered if I was about to end my days being blown over the cliffs of Olympus in my tent. I also thought about how wet I and my sleeping bag were about to get. I am highly susceptible to hypothermia, so was entering dangerous territory. How long do you leave it before you cry for help when doing so is going to greatly inconvenience someone else? I lay there. Tents on top.
3.40 was crunch time. There was an almighty crack as the wind twisted and broke one of my pole sections and drastically rearranged another, thrusting it through the fabric. Now what was left of the tent crashed against my face. Only the guy ropes prevented the Great Escape. I was about to get soaked. Time to exit. Still I was reluctant to disturb anyone else, so circled the others’ tents, wondering which one to use as my new harbour. The Microlights’ vestibules were full, I could see, but the Hilleberg looked as if it had room. Rohan was sleeping, I assumed. I didn’t want to wake him and didn’t want to impose, so circled some more, finding his gaiters that the wind had stolen and transferred to the nearest tarn. I fished them out. Rain strengthened. I was going to wet my only clothes if I continued this vacillation. Reluctantly, I called him to ask if I could sleep in his vestibule. Permission granted, so in I climbed and, exhausted, fell asleep on the ground. However, I was only wearing my light orienteering gear with a jacket on top, so soon woke up, cold. Rohan kindly leant me first his overpants and then his bed socks. Once more I drifted off. Later, he realised I’d be warmer if I came in, so I accepted that offer, too, with gratitude. Packing up next morning was a huge challenge. I had to dive under the still manic fly to pull any of my strewn belongings out from inside the tent. I had to stand or kneel on anything extracted, which made getting the next lot tricky, and several times I lost my grip, to end up chasing flying gaiters, socks and more. Even one boot ran off. I needed a dozen more arms to do this job. The others all had the luxury of packing up inside their fly and only emerging at the end for the tent-dismantling stage, but all my rumpus was being conducted al fresco, and with a minimum of style or success. I was still fighting my belongings and the others were obviously ready, waiting for me. I hadn’t even eaten. Being prone to hypoglycaemia as well as hypothermia, I couldn’t take off without any food. There was no point. I would quite literally faint on them within a half hour. My compromise was to have a muesli bar and a glug of water – not nearly enough for a person who normally has a super-giant bowl of muesli and a couple of bread rolls (and three cappuccinos) for breakfast. I am like one of those old cars you have to fill up at every town. No doubt quite annoying. This spelled trouble. Within half an hour I was sporting a headache; I was mildly dizzy and uncoordinated all morning.

Normally a happy rockhopper – called by others a gazelle – today I was a clumsy oaf. Not only was I clutching tenuously to consciousness, I was being blown sidewards by the gusts of wind. My reaction time was slow and I didn’t dare leap or practise my tightrope technique on the edge of rocks. I was cautious in extremis, which made me very slow, but eventually I made it over all the boulders to the other, second and slightly lower southern summit of Olympus and a different kind of view.

The rest of the day is a blur. I can tell you we exited by the unloved Cuvier Valley. The way was long and it hurt. Mostly, I was plodding along trying to last to the end in the face of increasing pain, which had now set in rather badly. I also felt defeated, which did not engender great brio. Somewhere near the end  it seemed that the track had disappeared. Every way was the wrong way. I was almost delirious with pain and could not see clearly, either literally or metaphorically. Thinking was beyond me. I no longer cared what happened. I was executing a plan (slowly, in an almost oneiric trance) when I heard Angela’s voice, sounding distressed. I called back and headed towards her. She was worried about me. The only warming thing that happened to me on this day was her obvious pleasure and relief at seeing me safe.