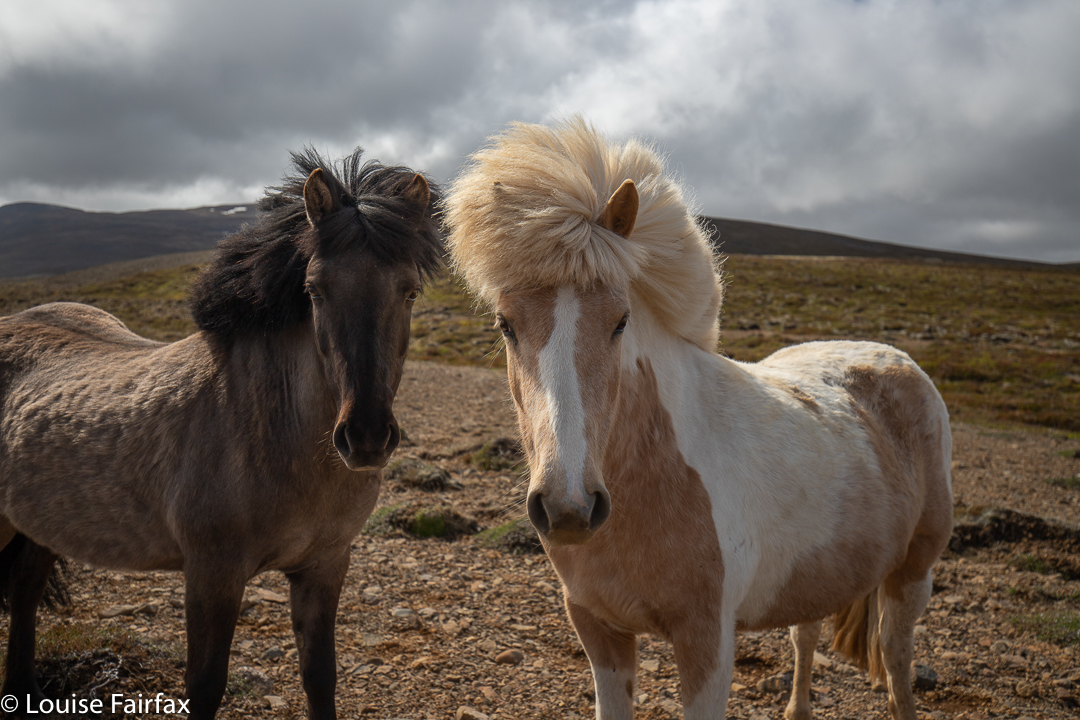 Rather than be efficient (who wants an efficient holiday?), I drove the long way (roads 54 and 59) around from Grundfjordur to Blonduos, back on the infamous Highway 1 (Day 10). At this unimpressive town, I had booked to stay at the Youth Hostel. The long way took a long time: over six hours of slow driving, taking things in, but not doing much photography, and even skipping the waterfalls on the map – mainly because Michelin is very enthusiastic about marking waterfalls, and they are not always there, and rarely called by the name this French map gives them. My main memory of this day is the monstrous struggle against sleep. No scenery stands out in my mind. The sun was shining but it was perilously freezing outside. I didn’t do any real exercise. I was just too uncomfortable.

On Day 11, I also chose the long way around, but this time, I felt I scored. I was en route to Godafoss, and my accommodation at Fljotsbakki Farm, only 4kms north of the falls. Michelin had marked my chosen peninsula with green, which is usually a good sign. And this time it sure was – possibly more so as it was totally unexpected, and Jean Pierre at the Youth Hostel had specifically warned me against this road, as it was unsealed and slow.

I think my favourite part was an area named Ketubjorg, which is a kind of gulch with massive cliffs. It sported an unnamed waterfall, so, in the absence of a given name, I dubbed it Ketubjorgfoss. After that took the main road, as I was sick of driving. I finally arrived at my destination after nine hours. Google had said it was a two hour trip (had I gone the short way and not stopped to ooh and aah at all the wonderful sights). I didn’t do all that much photographing, considering, as it was sleeting, and the wind was sharper than my kitchen knives (which, thanks to my older daughter, are of excellent quality).

Before settling in too comfortably, I paid Godafoss a visit. It was predictably lovely, but I was freezing cold, and there would certainly be no sunset of any description, so I hoped for better things on one of the later nights I had there.
History: Iceland was proclaimed a Christian country (divorcing itself from saga gods) in 1000 AD. Thorgeirr, the law speaker and a pagan priest, made the decision at the Allthingi (a kind of parliament held annually at Thingvellir, where a national park is now situated – see my blog Iceland-2019-1). Thorgeirr came back home to his farm here at Godafoss after this momentous decision, and, possibly to prove to the people he was serious, and to set a good example, threw his pagan gods into the waterfall, which has ever since been known as Godafoss, Waterfall of the Gods. I had always thought it had that name because any God of sensible choices would elect to have this waterfall as a token of beauty, might and wonder.

My visit to the Godafoss the previous evening had been to the more popular western side, so on day 12, I began the day with a visit to the eastern one, before doing an 8km hike in the hills behind my farm in snow and strong winds.
I also explored the stretch of the Skjálfandafljót River (which contains the foss) that runs past the farm. It is a magic blue for its whole length. Wild geese squawked as I went, but were never obligingly still enough for me to get a good photo.
I had planned to visit Aldeyafoss, also on the same Skjálfandafljót River, but a bit of a drive upstream. Emil, my host at the farm, encouraged me in this, saying it was definitely possible to get there. It was nice to have that assurance, as it sure didn’t feel like that in the final couple of kilometres.

So, on day 13, I set out. I loved the route by the river, driving slowly with geese following my car, sheep here and there, the river of magic blue beside me, and snowy fells above. I followed this side (the eastern) for 24 kms, when google told me to cross the river on the bridge. I obeyed. After crossing, I went 14 kms to Myri, and then, oh joy, there was a sign to Aldeyafoss 4 km, my first indication that google was not mistaken. When I only had 2.2 kms remaining, signs announced that it was illegal to drive on this (now) F road ( it had gained this status at the turnoff); we could be fined if caught; we were not insured if we damaged our chasis. It seemed very scary, and I wanted to just park and walk, but it was snowing and bitingly windy outside, so I took what was actually the safer option, and stayed in my car until the last moment. To be sure of not damaging my car, I drove like a snail on what had been, up until now, an entirely empty road (sheep and geese excepted). Four cars materialised behind me. 4WDs. I pulled aside. They belted past. Luckily, none of the flying rocks hit me.
When I got to the falls, the occupants of these hasty cars were there, totally absorbed, not by the beauty of this place, but in taking a series of selfies, where the self in the image was so huge that the wondrous nature behind was obliterated. These were “I got here” photos and nothing more. Their fists were raised in victory. And yet these braggish people are so insignificant in the face of the mighty, powerful and enduring forces of nature. What absurd pretensions. One guy was so preoccupied with the self and how it would look in his image he almost bumped me over the cliff. I would have fallen several hundred metres to my death.

This is not the first time a selfie taker has done this to me. I am terrified of them and try to give them a wide berth. Their next move, now that there was actually room for me to take a photo of the nature I had come to see, was to ask me to take a photo of their whole group. I told them they could wait until I had taken a few photos (the light was good right now, so I wanted no delay, and wasn’t in the mood for putting these people first). I took maybe four, but they grew tetchy. Hey, my shots lasted several seconds each. I was delaying these important people. A guy had lined up the shot I was to take. Yes, these people entirely filled the frame. Behind them, one of the most beautiful waterfalls on this planet was only a tiny bit of background glare. I took it as requested, and one more that gave some context because I hated my task (no doubt they will delete it). Off they went. I photographed some more, although I couldn’t do justice to these falls. The wind was so strong I didn’t bother with the length of exposure that would show them to their best advantage.
When I got back to my car, I saw they hadn’t left yet, but, noting my approach, their bodies visibly stiffened and a frenetic rush to get away took place. They feared that I would get away first and thus hold them up, so they quickly finished photographing the guy who was going to the toilet and started their engines. There was no notion of manners or consideration to make sure I got this difficult section of 4kms dispensed with safely. They accelerated quickly away, sending dust and stones flying. I covered my camera to try to protect it. God had made them masters of the universe, and to hell with the rest of us. For now, I dusted off my camera but refused to do obeisance to people who thought the world was made entirely for their benefit. I managed to get out safely.

In the afternoon, I went, again at Emil’s recommendation, to the Barnafoss of this area, which is maybe 8kms downstream from Godafoss. (So, I have now photographed 4 falls in this river). Emil pointed out the farm where I was to park, across the river and in the distance. Maya, his wife, helped by map staring with me. Even so, I had to ask a friendly farmer, as nothing was a perfect match with my expectations. Emil was right about parking at the last farm. The friendly farmer implied I could drive all the way. My Subaru could have, easily, but I am driving a Hyundai, with exceptionally low clearance, so parked just after a fence boundary and walked what could be driven if you weren’t worried about insurance company’s ire. The pleasant enough walk on a 4WD road took me 37 minutes in each direction. Nobody told me I’d be on a road. I enjoyed the chance for some extra exercise, and the wind was no longer quite as fierce. It had even stopped sleeting.
At the road end, there is a tiny path with ropes for the slippery sections. The waterfall was so powerful, it was actually rather hard to photograph; the white froth dominated the scene too aggressively, and I only have a .6 GND since my camera on tripod blew over in a massive gust and smashed my Little Stopper and .9 GND. I really enjoyed having such a powerful waterfall entirely to myself, without the slightest risk that anyone would come that way. This waterfall is for locals. The name is also local, and the mappers haven’t put it on. If it were in Tasmania, it would have accolades as state champion of something. Blueness for a start. Volume per second possibly also.