Bartle Frere seen from below Forest en route
I looked out the plane window as we descended for landing. Below were azure waters and green mountains. I should be excited, but my friends would probably be climbing a Tassie mountain in the snow this coming weekend, and the tropics held no particular allure. What was I doing here? It seemed I was having a holiday in Queensland because the family expected us to have a holiday in Queensland. That evening, as we tried to share the lagoon area of Cairns with hoards of young smoking German tourists, I longed for the quiet and beauty of home. What were we going to do to amuse ourselves on this holiday? We’d been too busy to make any plans at all. It’s amazing the flight and car had been booked. I have wanted to climb Mt Bartle Frere, Queensland’s highest mountain – a climb from 100 to 1622 ms asl – for several years now, but had always been put off as the official QLD bumph one reads says it takes two days. I was also not enamoured by the prospect, as the same information said that if you do it when it’s wet you’ll slip and injure yourself, but if it’s dry, you’ll need to carry ten litres of water per person to avoid death by dehydration; if you do it when it’s cold you’ll freeze to death, but if it’s warm, you’ll die of heat exhaustion, or thirst or other related causes. It said there are very difficult climbing and boulder hopping manoeuvres at the top – if you get past all the other obstacles and terrors posed by this treacherous environment to reach that point. Never having had two days at our disposal, and rather wondering about these lurking dangers, we had opted for other activities in the past. This year, however, with no plans, there were also no excuses. We set out from Cairns after breakfast driving south for a bit over one and a half hours, the intension being just to go as high as we could until midday to suss it all out, and then we’d know if it really was out of range. The first surprise was the availability of water. We crossed four or more flowing streams before we crossed a creek that needed a bridge. At the 3 km mark, there was another creek. We only had 4.5 more kms to go, which is not so very much if there is no more water – and there was no more water after that. Of course, it could be drier than this – but this is the dry season, and we did rather think they doth protest too much. It was steep, yes, very, very steep, but it’s a mountain, so steepness rather goes with the definition. I even worked up a sweat, which I never do at home, and thought of some of my club members rejoicing that at last this was happening. Once past the helipad (7 kms), there are more signs warning you of the dangers of traversing the boulders. I was fearful, and glad I’d left my husband behind after travelling at his speed for 6 kms. He’d no doubt rest at the helipad and wait for me to come back down. I was at the summit after 3 hours 15 mins climbing, and I hadn’t been pushing the pace at all, partly because of keeping with my husband, and partly saving energy for all these unknown, unspecified but alluded to terrors that lay lurking behind every vine. 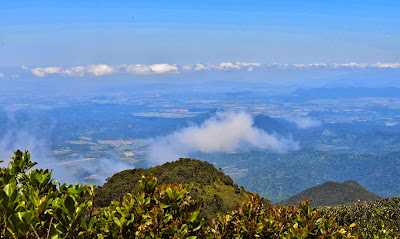 On my descent, I nearly died of shock to find Bruce at the end of the boulders. “I just thought I’d have a look and go as far as I could go,” he said. This man has Parkinson’s disease, but had successfully negotiated boulders that had monstrous drops between them. If one slipped or misjudged, it would be very hard to be extracted. I was proud of him. Descent
The track was beautiful, with rainforest nearly the whole way, and had a wonderful, tropical feel to it. The views across the boulders were excellent, although somewhat hazy as we were kind of in the clouds. There was no view from the top – just a sign telling you you’d reached it in case you hadn’t noticed. Had I not read the sign, I would have gone on, looking for the top. It’s not exactly obvious. Summit sign
We had lunch at the “3km creek”, a swim at the Josephine Falls (more loud, rubbish throwing, smoking gangs of tourists) and were back in Cairns hours before dinner.