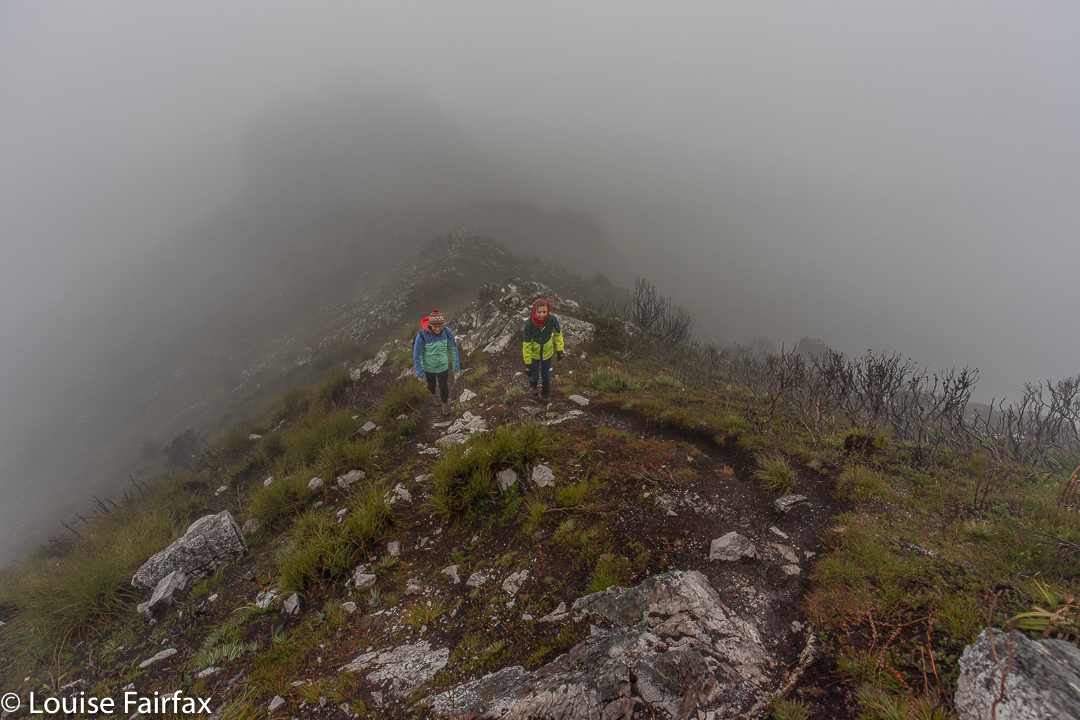 In an earlier blog, I wrote about climbing The Needles with children in mind, to assess the suitability of taking young children up.
(http://www.natureloverswalks.com/cullin-twelvetree-range/)
I was not exactly expecting to test my theory (that this was, indeed, a suitable climb) in conditions that had nearly every self-respecting citizen of the state safely inside by the fire.

But so it was. One makes bookings to be in a place at a certain date, and then arranges everything else around that, and, well, if the weather turns cranky you either have to sit inside, or go out and take what comes. We set out to take what came, and go as far as was pleasant, and turn around when things became impossible, unbearable, or both.

We had booked a cottage near the Mt Field National Park, with the intention of “fagus hunting” up high. We had indeed hunted for the wonderful Nothofagus gunnii, called affectionately by Taswegians “fagus”, noted for its marvellous autumn colours that tend to conveniently peak around Anzac day. However, up high where it likes to be, the wind was exceptionally strong, and the rain prohibitive with respect to photography, so we had enjoyed the workout up to Tarn Shelf, but hadn’t stayed up there for long. That – and some fungi hunting at Growling Swallet (a mud bath on this day) – was Saturday’s exercise.

On Sunday, Abby took Kirsten and me to Junee cave (which she felt very clever doing, being all of five years old), while Gus and his dad tested out one of the fabulous Maydena mountain bike routes, returning to our accommodation covered in mud. In the afternoon, Gus, Kirsten and I climbed the Needles. Abby and Keith were going to as well, but Abby fell asleep in the car on the short drive there, so she slept, Keith read a little, and we remaining three climbed.

We could see almost nothing, and even less than that, as our heads were truly “tucked in” out of the wind; we saw our feet. Visibility was only about ten metres anyway. The wind raged. The climb was steep and entertaining, and we all enjoyed the exercise with the hints of rocks and drama to tantalise.

In the final saddle, the wind was particularly strong, and the summit, for those who don’t know it, looked extremely forbidding, poking its blurry yet jagged outlines into the mist above, so that Kirsten was thinking turning around would be a very good idea, happening to love her gorgeous son and not wishing to see him disappear off the edge of this mountain.

Gus, however, had summit lust, and wanted to keep going. I assured Kirsten that the mountain’s bark was worse than its bite, and that he wouldn’t blow off some precipitous edge, even if it did look as if that were possible from where we stood. On we went.

He said it was because of the hundreds of fungi we saw at the start that he named it the favourite mountain of his life so far (9 years), but I think it was also because of the exhilarating climb, made sweeter by the tinge of danger and the doubt about pulling off a summit victory. Where there is uncertainty and a tolerable sense of danger, final victory always feels more jubilant.

He had climbed well, making the summit in 46 minutes. Downhill was a couple of minutes slower, as more care was needed, and we felt at liberty on the descent to admire more of the fungi and the few straggling Stylidiums that were hanging around nearer to the start.