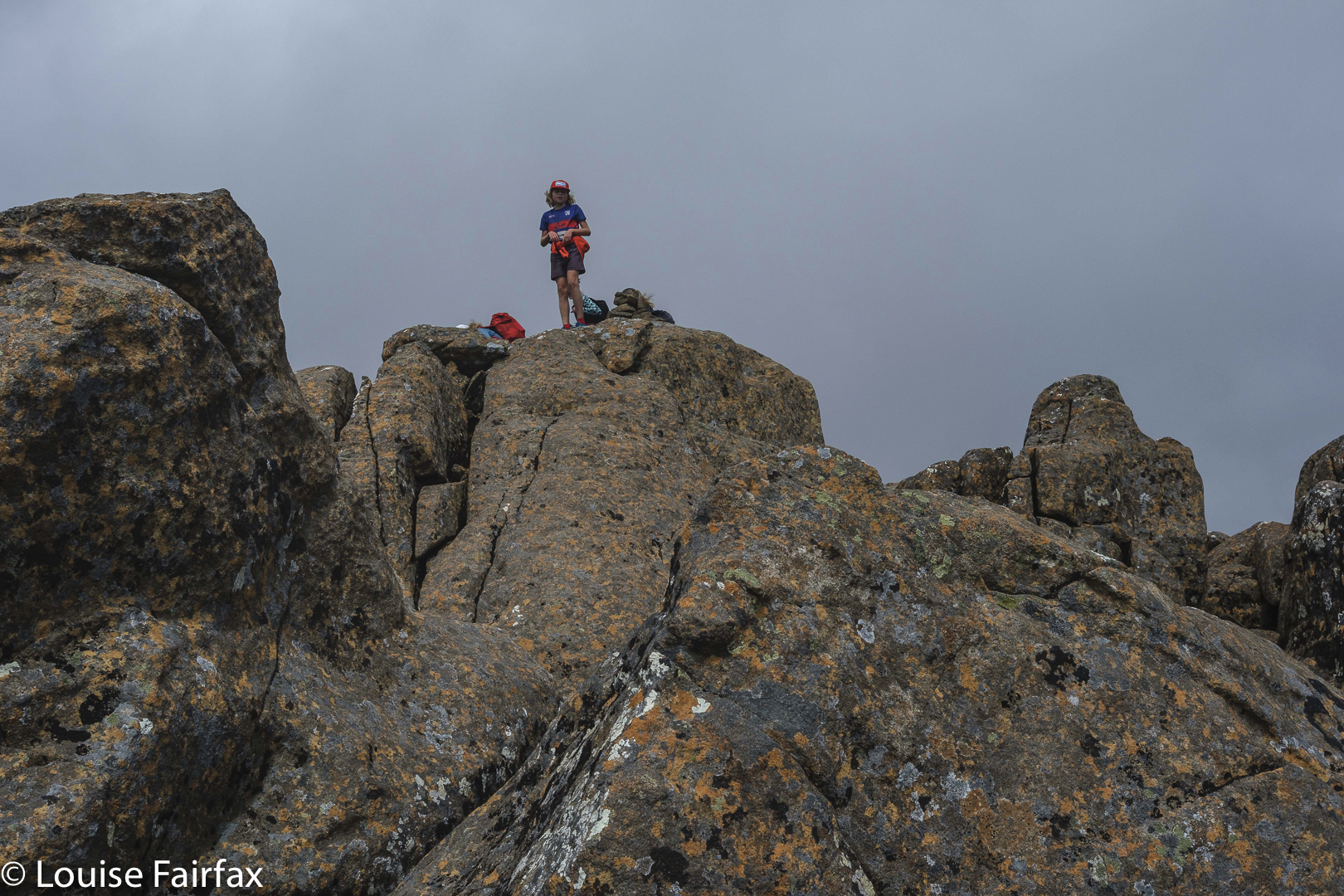 It was my daughter’s birthday, and a friend had suggested she climb the Abel Mt Snowy South on this momentous occasion. An invitation was extended to Gussy and me, and so it transpired that six of us set out for Snowy South on World Mountain Day.

Abby elected to stay at home and play with her father, and, considering the fact that Snowy South is quite demanding, this was a good move, even if pretty sad for Keith, who would normally have loved to join in. It probably would have been even sadder, however, to carry a reluctant and possibly complaining 15 kg daughter on a walk advertised as lasting six hours, if that’s how things worked out. No one wants her to hate bushwalking / mountain climbing, and as a result, all her walks are entirely voluntary.

We started quite late, and then celebrated with excellent pastries in Ranelagh before we began our pleasant way through the lush green rainforest, up to our first break at Lake Skinner, after 1 hour 15 mins walking.

After more climbing, I announced I was very hungry. I know we had had a late morning tea, but I am an animal that constantly needs feeding, so I spotted a little tarn and requested that we at least had lunch number one there. It was 2.10 pm after all – waaaay past my lunch time.

This water was in a flat section before the last climb, which proved to be rather good fun. This is not a mountain you stroll up. Young Gus is only in fourth class, and some of the hauls to the next level required quite an effort from him. I could hear him grunting on several occasions. At his height (he is very tall for his age, but still lacks the reach of an adult, especially his orangutang nana), he has to be quite creative about how he can enable the next level, as often the route we take is not one that’s suitable for him. The day before, he had raced the individual event of the Primary Inter-Schools’ Triathlon in the morning, and in the afternoon had raced the run leg for his relay team in the same event. In addition, he had been in his primary school’s mountain bike race the day before that. He did well in all three races. I was impressed that he even wanted to come, let alone cope as well as he was now doing, and do it all with such enthusiasm.

Five of us (including him) reached the summit, where we discovered it was freezing cold that high in the sky, so descended without eating. Once more, I was starving in the flat bit under all the rocks, so pleaded for lunch number two, it now being something near 4 pm, or was it 4.30? Either way, Gussy and I needed food! We sat together by the tarn, finishing off our salad rolls.

On the way home, a plaintive voice sounded from the back of the car: “If I fall asleep on the way home, will daddy carry me into bed?” Poor darling. He didn’t fall asleep, but on arrival home, he cleaned his teeth and tumbled straight into bed without dinner. When I later added up the distance and height factors of the day’s effort, he had covered twenty kilometre equivalents in a time of just under six hours. Next morning at breakfast, he piled six Weetbix into his bowl, before he even thought about the next course.