Above Twisted Tarns
This trip was so very beautiful, we sounded like a pack of dogs going “Wow, wow, wow” all the time. I took an unconscionable number of photos, from which fourteen appear here. Even that number seems rather large, but having only just come back today, I find it hard to eliminate any more than that. I need a bit more distance to be more selective. The track between Scott-Kilvert Hut and the Emmett-Cradle saddle was a major cascading waterfall with deep pools in it, and the bushes overhanging it were laden with water, so that we were sopping by the time we reached said saddle and its furious wind, having managed to somehow keep our boots dry the whole morning, despite the snow and rivulets on parts of the track. From the saddle, we began a kind of goose-step march through thick snow over / around (bit of both) the nameless hump on the map, down to the Emmett-Hump saddle and then through the thick scrub of that next saddle where we had to fight closely packed bushes as well as deep snow. The wind was so strong and the going so tough (and the clouds so thick) that I didn’t take any photos in this section. 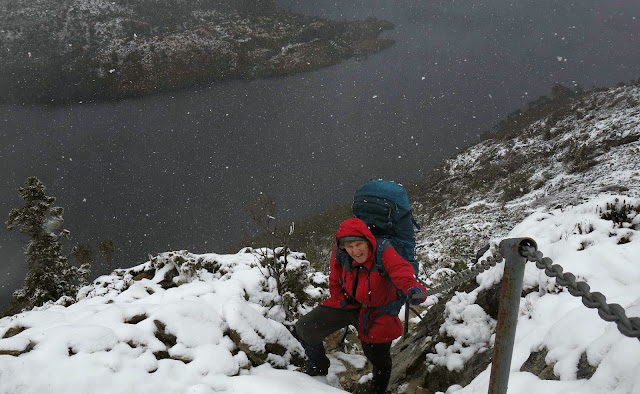 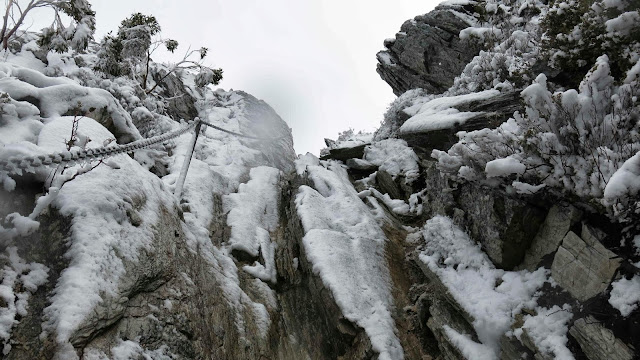 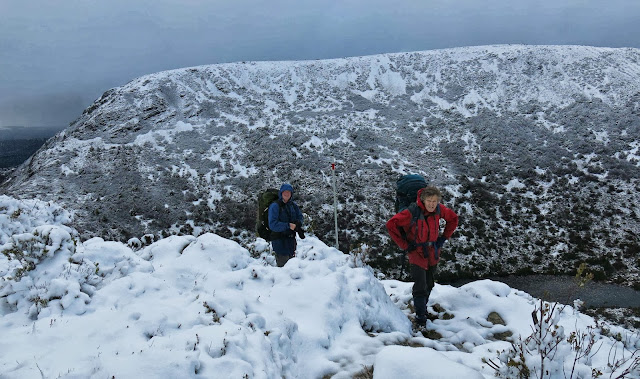 The rocks on Emmett
In fact, this here is the first photo I took after leaving Scott-Kilvert Hut. This was, alas, our turning around point. It depicts the final few hundred metres before the summit. Maybe those boulders don’t look very big. They’re not as big as, say, those on Pelion West. However, the snow made them treacherous, and we knew that a slip in between rocks that wedged a foot, or a breakage would be disastrous. And daylight was running out. It was already way too late for any help to come, and to be out there overnight would be death. We were only 400 ms from the top, but it was time to say “goodbye” and try again another, hopefully rather less snowy, day.
We arrived back at the hut sopping wet, and cold from the icy blast that had raged on the exposed flanks of the back of Cradle. We had been planning to sleep in our tent, but changed our minds. Scott-Kilvert Hut was by this stage a kind of island in the middle of a flowing lake. A hot cup of soup and dinner were in order. We hung up our sodden gear, pretending that might help it dry, but knowing that we’d have to don it again in the morning.
My sleeping bag was warm and cosy. Every now and then I could hear the wind having a bit of a rage during the night, but mostly I slept warm and snug, despite the lack of real heat in the hut. (For European readers, and I see I have many [thanks], these huts are not like yours. They are shelters with floor to sleep on, and no electricity. You bring your own stove, food, mattress and sleeping bag, and if you want a shower, you go outside for five minutes and stand in the rain.)