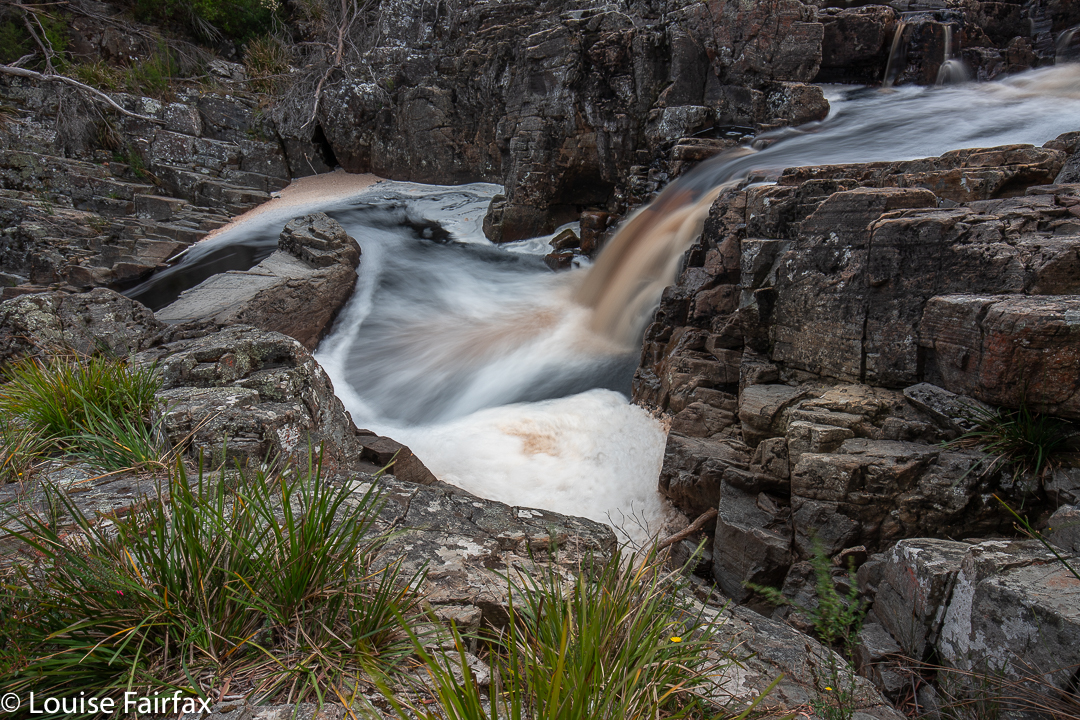 It seems I am a girl who drove a very long way for something that never happened, as the reason I went to the Tarkine was to kayak to the Elver Falls. However, when I got to Arthur River “township”, I couldn’t raise the people who hired out the boats (the river cruise man said they probably hadn’t put their hearing aids in yet). The shed in which the boat was hiding looked as if it needed  a lot more than a hearing aid.

The images available around the shed were of very elderly canoes, not of kayaks at all, and they looked a little like tubs. The wind was up and my broken wrist is only just out of its cage. My spirit of adventure was thus not high. I was prepared to kayak but canoeing made me uncertain, and I really felt uneasy in this state about popping my expensive camera gear in such a vessel. I had been very happy at Corinna, where the kayaks had a waterproof hold, and where everything seemed in excellent condition, but Arthur River ‘town’ just wasn’t doing it for me.

So, instead of kayaking, I went for a walk along a beach possibly more than appropriately dubbed ‘The Edge of the World’. It was remote, windy and atmospheric. The rocks were fabulous colours, and, as I enjoy wild seas, this substitute pleased. As usual for the Tarkine, however, I needed to get moving, as I didn’t want to eat greasies at Arthur River when lunchtime came, so needed to get somewhere that sold something more nutritious and tasty by late lunch.

South I drove, lamenting the fact that one seems to do far more driving than walking in the Tarkine, until I reached the Nelson Bay River, which sports a pretty waterfall within a stone’s throw (literally) of the bridge. I got to walk at least twelve paces at this spot. Luckily Tessie and I had had a lovely long walk on the beach at Stanley after breakfast, before leaving, so the day, which didn’t seem to be shaping up too well at this stage, wasn’t entirely devoid of exercise.

I decided to return to the north coast via the Julius River Reserve, as it offers a tiny little walk, and maybe there would be some fungi. My hunch was rewarded: there were indeed some wonderful fungi, and I found a second little walk, but I was feeling very under-exercised indeed. By the time I had finished with Julius River, however, I had eaten the lasagne I had brought and some snacks, and I really needed more food, so for the third time in three visits, I found myself exiting the Tarkine sooner than I might have, as I was hungry.

Sure, when I’m bushwalking I have my own food, but I am not bushwalking here. If I have to do lots of driving, then I like to reward myself with coffee and cake, and something tasty for lunch. Dehydrated food requires the eater to have exercised all day and be extraordinarily hungry before it even begins to taste tolerable. (After a full day’s walking, you’ll be pleased to learn, it tastes absolutely delicious.)

Anyway, on we drove, heading for the shortest route home, which seemed to be via Smithton. By the time I reached the nice cafe above Boat Harbour, it was well after three o’clock and I was ravenous. That cafe fixed that, and on I drove home, arriving a couple of hours later with a whopping headache from too much driving.

It seems that if I want to see the Elver Falls, I need to find someone with a double kayak who would also like to see them, or hire a light singleton near home and take it there from here.  No matter. It wasn’t to be this time, and now I have recovered from all that driving, I have happy memories of beaches and fungi and a few flowers ….. and of being hungry.