Peak one of Mt Pearse
Mt Pearse was a wonderful mountain with a super ridge line. We began in lush rainforest, progressed to a short section of (doable) bauera scrub, and then began climbing through dry sclerophyll forest with stunted gums and low shrubs, up onto the ridge.  It was really dramatic once we emerged on top, with fine views all around. Enjoying the drop off to either side and the sense of space up on the edges, we went along to the fourth peak, which is said to be the summit (and which has an ugly, knocked-over trig lying like a dead animal that no one has cared enough about to give a decent burial to in the shrubbery), but climbed the fifth for the heck of it, and then got a higher GPS reading. Thus the old summit and trig do not appear to actually be the summit of Pearse, and the fifth bump with cairn has, it seems, outgrown big brother. 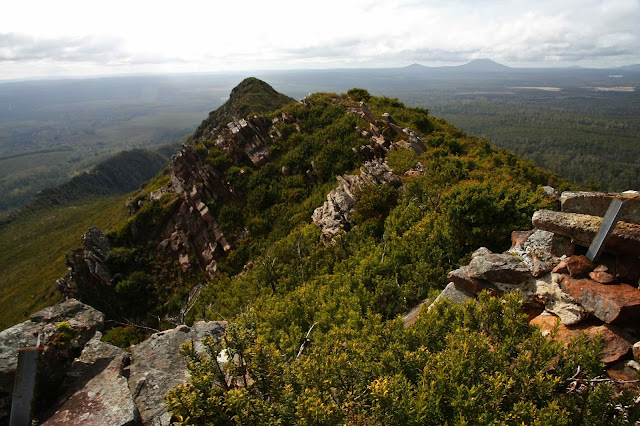 Looking back along the ridge from peak four of Mt Pearse Looking back to the others on peak four
By comparison, Mt Cleveland on the Sunday was a pretty boring mountain, with a road all the way and not much of interest to see at the top (particularly as it was a bit hazy). However, it was a great workout, as there was nothing stopping uphill movement apart from one’s own fitness, so I had a great time striding out, and enjoyed the fact that it wasn’t all over too soon, as is often the case. The road was very slippery from the recent rains, so we parked 1.2 kms lower than expected, which increased the workout value of the exercise. I was alone at the T-intersection at the top, decided the main summit would be to the left, went to the highest point visible on that ridge, came back down, went to the top of the peak to the right, saw that the peak to the left had an extension that went even higher, so went back and summitted that. A few of us did this cute bit of exercise, and enjoyed the extra exercise. It says something about the mountain, however, when I say that I took no photos on the summit, one at the T-interesection just to have gone click (now discarded), and two back near the car at a stream crossing. From this photophile, that is an all-time record low. But we are one point richer, and surely a bit fitter for having gone there.