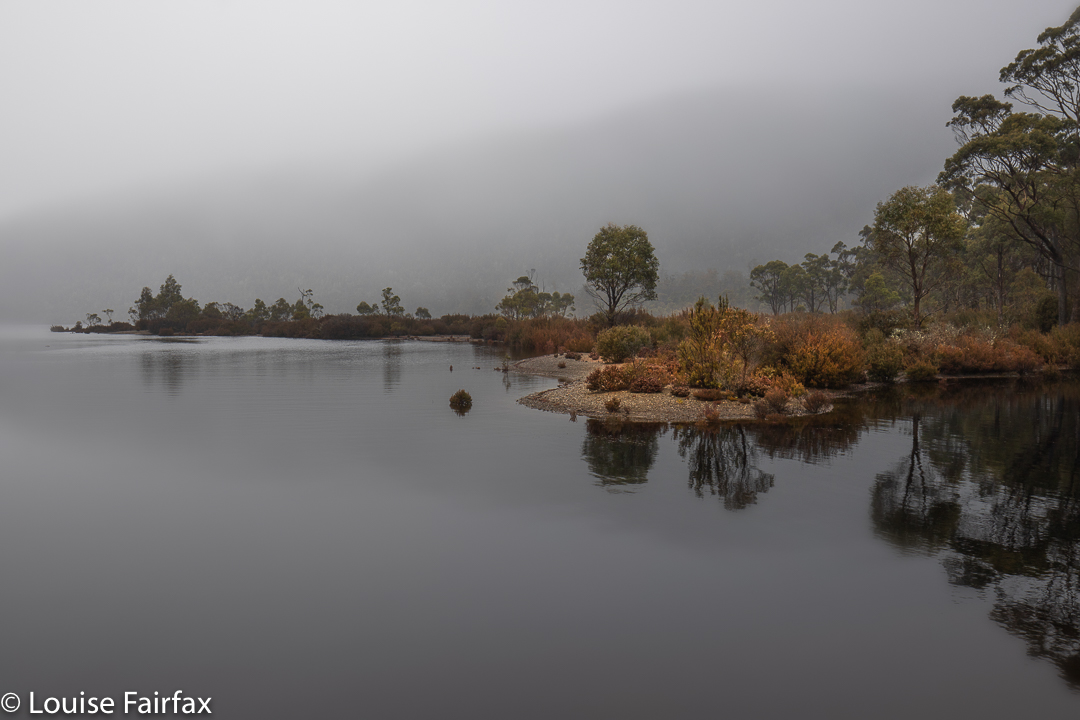 Deciding to take two young children on a three-day venture into relatively remote wilderness in the middle of winter seemed to me like a pretty daring proposition, given the weight of the parental packs and the distance to be covered; and yet, I felt it had a strong enough chance of success to be excited by the idea, and, hey, if it didn’t quite work, at least we’d all be together in the beautiful mountains doing something, and maybe I could be of help. I was excited.

Why was this task so enormous? Because (i) four-year-old children should not walk monster distances, and the track to Pine Valley was probably beyond the limits of what would normally be advised for that age, and (ii) young children need more clothes that we do: they can get their gear wet more readily than an adult does, and do not tolerate being too cold. They also eat a lot, especially Gussy, who, although only eight, is growing rapidly and seems to be an eating machine. Bruce and I stopped overnight bushwalking with the girls when they were 3 and 1. We stopped on the day that I fell over face first, not strong enough to stabilise myself with both a baby and all the normal gear on my back. (Bruce also had a huge pack, and carried the three-year old when she got tired.) That was on the South West Coast Trail. Hm.

But here I was, back at the starting line, my “three-year old” now a mum of two delightful children, doing for them what we did for her, or, in this case, more, as she is stronger than I ever was. Gussy (8) carried his own clothes and sleeping bag; Abby (4) carried her lollies (and even they were given up after a short time. Two hands are nice). The parents’ packs were ginormous. My pack was heavy enough for me, as winter packs always weigh quite a bit, and I also had in my camera, tripod and filters, all of which total about 6 kgs before you begin on the other items. But we were travelling at four-year-old pace, so it was more weight bearing than furious exercise that was going to test us.

Our goal (or our high hope?) was to reach Pine Valley Hut by the end of the day. It didn’t matter if we didn’t get there, as we were camping anyway, but it’s a nice flat area, and a good base for going up the Acropolis on day 2.  We took a very long time to reach the half-way mark, as there were lots of deep puddles that posed problems for both children. Abby “flew” (courtesy of dad or mum) over most of the big ones, but Gussy, being heavier, had to negotiate his way around, which took time. I was so glad about the real bushwalker boots I had purchased for him, and so was he. His pack weighed about 6 kgs, which was heavy for his young frame, and I could see that his shoulders were a little sore by the way he was carrying it (just like I sometimes do – pulling the straps forward to take the weight off the shoulders for a while), but he never muttered even a quarter of a murmur of complaint.

On we progressed, over the swinging bridge near the turnoff to the valley, and I feared we would be arriving in the dark. (There had been no normal 9 a.m. ferry, so we had fewer hours to fit the journey in than most). Abby was offered a piggy back or huggle-carry, but wanted to walk the whole way, so on the train moved at that pace. It gave us time to enjoy the magnificent forest.

About a kilometre before the end, the scotch-mist became more of an intent drizzle, and the day was getting threateningly dark. We agreed that I would set out a bit faster with Gussy, to at least get him in relatively dry, while the other two worked on Abby to persuade her to allow help. She really wanted to do it all herself.

Gussy and I arrived, and I began with tasks like water collection to make everyone some hot soup. In very little time, Kirsten and Abby (carried) arrived, which meant Keith was still out in the forest carrying two huge packs. Kirsten deposited Abbs and hurried back to help him while I minded the children. I thought they would whinge about being cold or wet or hungry, but when I said I was working on making some soup, they were delighted, and sat quietly while I got the gear and nudged in the direction of soup. Abby was delighted that it was to be “Two Minute Nudel soup”; no complaints about the menu there! I think each child ate two packets of that, and then progressed to pasta for main course. Again, squeals of excitement at getting their favourite food were the cheerful noise that filled the night sky.

Dinner eaten, we pitched the tents. The others played cards, but I was fixated on warming up my tent space on what was already a very cold night (it went to minus 3), so just listened to the game across the fabric.

The next day, we wanted to rest Abby, so Keith stayed at base, playing with her and Gussy. Kirsten set out up the Acropolis, to do as much of it as possible in the time allocation (she needed to be back for a midday lunch), and I set off with my camera gear, having a wonderful time. It would have been nice to also go up the Acropolis in the snow, but there wasn’t time for everything, and we decided we needed to do some of the homeward journey in the afternoon to take the pressure off making the 1 pm ferry the next day.

And that was the activity for the afternoon. The scenery was as beautiful as ever, and we made our goal of the half-way mark. There was a perfect camping spot there, and plenty of water. The only problem was that it was raining, but (to save weight) I had only brought my 3-season tent, which is pretty open until you get the fly on. Pitching in rain means water gets in until you have the fly up. Panic, panic. I did not want a wet “bedroom”. The children remained cheerful; I was the grumpy one, trying to race to get my tent up so I wouldn’t freeze overnight. This night would be minus 4.

Day 3 dawned clear, with a thick white frost: so thick my boots in the vestibule were covered in a sheet of ice. The rain droplets from the night before had frozen to become myriad little ice balls, set in a context of frozen condensation. I didn’t care much, however, as the scenery was so beautiful I had to hurry out into it. I dashed off with my camera equipment, returning with hands that were dropping off. Crunch, crunch I went on the ice of the boardwalk.

When I returned, the excited children wanted to show me this and that beautiful object covered in ice. Gussy and I went and inspected the river to see if mist would be rising off it. The campsite looked glorious in the shafts of golden light, all the blonde heads of hair making wonderful halos.

And soon enough we were all crunch crunching on the ice for the final section, a walk punctuated by stops for lollies for the children, photos of plants covered in ice for me. The kids were positively jubilant on arrival at Narcissus hut, with oodles of time spare to wait for the ferry.

That night we had “normal person” accommodation. The children were so excited to have beds, switches, BEDLAMPS and a BOX OF TISSUES each – signs of decadent luxury – that I found it quite funny. It is wonderful to see such simple pleasures providing that degree of enjoyment. Paddy Pallin used to say he loved the way that bushwalking and its privations made him enjoy the normal things of life so much more, and this was certainly happening here.

The next day, we would do a snow climb of Mt King William 1, which you can read about in http://www.natureloverswalks.com/mt-king-william-1/