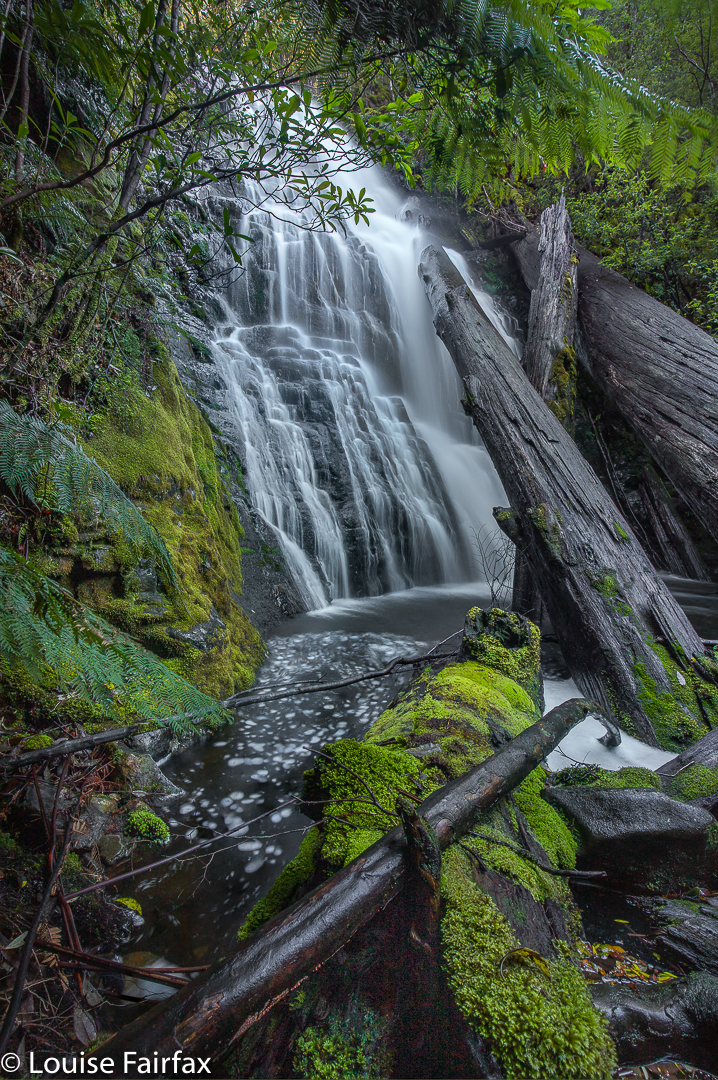 Diogenes Falls, Styx Falls, Eurydice Falls, Styx River, Andromeda Spur – all these (and more, of course) are features of the Styx Valley, the large area surrounding the Styx River, which rises on the flanks of Mt Mueller (an Abel) and flows predominately eastwards, later turning more north as it joins the River Derwent near Bushy Park. It is an area characterised not only by monstrously tall Eucalyptus regnans, but also by some of the mossiest, lushest forest imaginable, and by so many mycota (the name that encompasses all the fungi of an area, much as flora does for plants, or fauna for animals) that fungi foraying in the area is extremely popular and fruitful.

The names Styx, Eurydice and Andromeda are all from Greek mythology, and are mostly connected to the idea of the ancient River Styx that lead to the underworld, or Hades: Hell in other people’s language. Eurydice was Orpheus’s wife, after all. I always imagined that the darkness of the river and the general  shade due to the dense forest had leant the area this name. Such imaginings conjure up a certain feeling when one is in the area (especially if one does so accompanied by the sound of trees falling and chainsaws brrrr-ing. Is that not the sound of hell?)
However, Wikepedia informed me (with documentation) that the area, first settled in 1812,  was noted even then by the many fallen trees lying across the river and along the banks, presumably from floods. So, most unromantically, the name came from this feature. It was the ‘river of sticks’ – Sticks River. The name as we know it was changed later by a government official, who perhaps had a more vivid imagination and a knowledge of the ancient Greek stories.

I personally like the idea of Styx rather than sticks, especially considering the terrible fate of most of these magnificent giants at the hands of modern chainsaws. What it has taken nature millennia to build up, greedy humans destroy in the twinkling of an eye, with no concern for any future citizens, and no consideration of our psychological need for green nature or the earth’s need for biodiversity in order to actually continue its presence as we know it.

Anyway, on Monday, my friend and I kind of beat the chainsaws, and visited Diogenes Falls (named because they lie on Diogenes Creek which flows into the Styx). Diogenes was not a character from Greek mythology, but an ancient Greek philosopher, who used to walk about in the daytime with a lantern, saying he was searching for an honest man. Good luck mate. Try modern politicians.
As we walked through this mossy fairyland, we did so to the metallic and threatening sound of the chainsaws, and the worse thud of trees falling. The creek abuts a logging coupe. It does not lie within the coupe, but that didn’t make the sound any less confronting. Luckily, the guys knocked off for a bit while we were there, so we did get some blissful silence after our arrival at this glorious place.

It felt kind of spooky walking through that forest. The noise filled me with disquiet, but we weren’t on logging territory, and we wanted to see and photograph these falls (which are not on the map), so on we went. We did change our original plan of attack (straight there) as that was heading us directly towards the sound of falling trees, so we followed the spur down a bit before curling in to where the falls were. On the way out, we just attacked our direction head on, and that was a better route.
This area leads to a new definition of steep. It was so incredibly steep I really didn’t know if we could get back out again, but at least I had Caedence with me so two of us would be stuck (always better), and Rob, who found the falls, had managed to get out, so it was possible. I wasn’t tooo worried, but was not confident. It felt like pure 90 degrees. Even having been there, and thus now being more confident of the area, I would still be more than reluctant to go there alone. There are lots of opportunities for misfortune, to say the least.

I even had a mild incident when a branch decided to randomly swing back on me and bopped me on the nose with a mighty whack. Caedence was at the time photographing the top of the falls, which I didn’t want to do as Tessa loves swimming at the top of falls, which is a very unsafe hobby. I stood there, out of earshot, with blood literally streaming out of my nose, and began to wonder if I would faint from its loss. I didn’t, but I did drink a lot of blood, as I didn’t know what else to do with it, and decided my body might need it.

So, with all that angst and noise, these falls needed to be pretty fabulous to justify the expedition. I loved them, despite their proximity to those forestry works. They feel in my mind in the afterglow, like a truly hallowed place. Maybe that’s just the effects of cognitive dissonance in operation, but that’s what I have. I hope you enjoy my photos, as these falls are not for your average bushwalker: the intense slope makes them very, very dangerous. I did not relax mentally until we had regained the high ground.

The next falls we visited were Gold Creek Falls, which were not new to Caedence, but he didn’t mind revisiting them for my sake, as I hadn’t been there yet, and had had them on my agenda for this day. I actually loved the Upper falls better than the lower. The side falls to the right were more like a big cascade, and less photographically appealing. I didn’t bother, being so besotted by the Upper falls. This was yet another waterfall complex where we parked slightly above, so had to drop into the falls. After Diogenes, these were not confronting at all, and were, like everything in the Styx Valley, a pure delight.

Having also visited Ice Falls and Bowl Falls that morning (to improve on photos taken when they were in flood), we were now running out of light, so called it quits for a winter’s day near the shortest one on offer for the year. The light was already very cold for photography. And I was already more than content with the day’s collection of beautiful images that filled my mind with happiness as I drove back home.