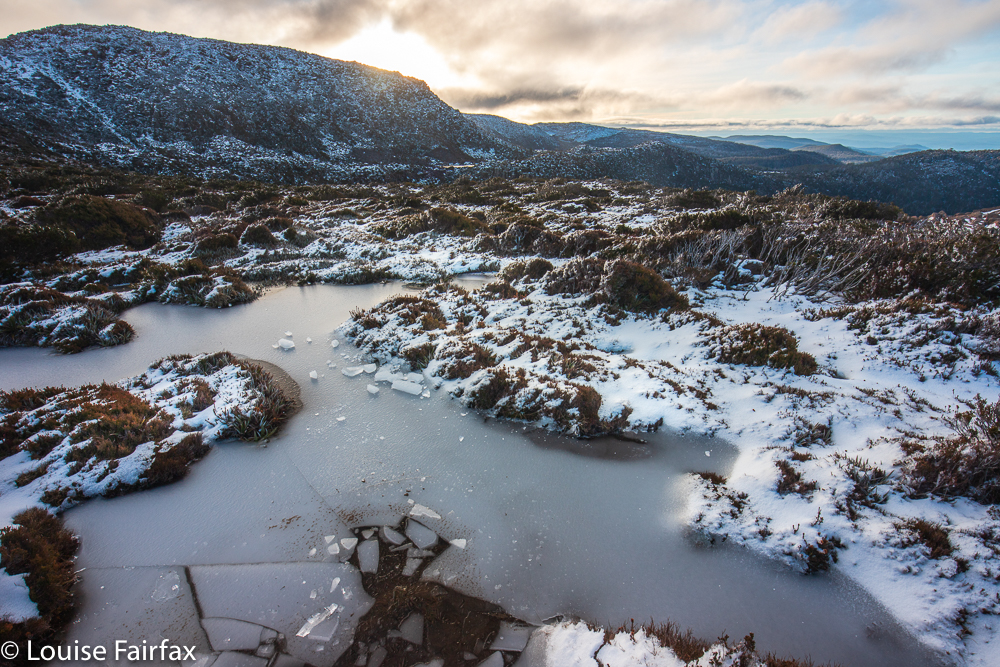 Not everybody knows, but if you don’t mind unheated huts with no pampering, Mt Field has Government huts that can be hired by families (or other groups) for a very reasonable sum. Our family made a three-day booking for the school holidays just gone by. To say it was cold is an interesting and inadequate summary, but not something that would ruin a holiday: in fact, it probably made it more memorable and enjoyable.

It didn’t help that we arrived in the dark, a few hours after work, and were not particularly successful in getting the fire going strongly at that hour. I can do “being cold” in my tent, as I warm up the space quickly enough, especially if I have jut been exercising, but a hut with “big space” and no preceding exercise  is different. Luckily we were prepared with blankets as well as sleeping bags.

I was cold enough during the night to think that this holiday was not such a good idea and maybe I had urgent business at home that I had forgotten about, but when I saw the beautiful white frost out the window on awakening, I decided this was worth a little discomfort, and I couldn’t remember the urgent business.

The children were also excited by all the ice, and had fun trying to walk on tarns and seeing if they would fall in. I tried to go for a training run, and did get as far as Lake Dobson, but once I’d had a free skating run on an icy slope there, I decided I wouldn’t go any further in that direction. I got in my exercise down a bit lower on the Lady Barron Falls track instead.

That afternoon, after games in the now-warm hut, my daughter and l set out for the snow on Tarn Shelf. It was very slippery and icy, but we took care, and it was superbly beautiful.

The next day was even colder, (minus 5 in the valley, so, less where we were), and the tarns were even more alluring. That day the children were also keen to go up high and have a snow fight and a general play, so we all climbed up and had lunch in the snow.

Snow fights don’t amuse me, so I climbed higher, onto the Mawson shelf to check out things there, and then dropped back down to join the others at the Lake Seal Lookout, for round X of the snow war. Eventually the children were prepared to move on further, to the hut just past the Rodway Range intersection in the track. Funnily, we bumped into another family from the children’s  primary school, also exploring the snow up there. I am so pleased to have grandchildren who are prepared to get out into the environment and enjoy what it has to offer rather than sitting inside staring at and swiping screens all day.

On the final day, Gussy, his dad and I climbed Mt Field East, which had very thick icicles on all the rock sections. Gussy is 9 and that is his ninth Abel. There is something quite neat about that. The days when I had to slow down and wait for Gus are now behind us. These days, he has a very tidy pace indeed, and was faster than I was over the ice cubes. I preferred four points of contact while he was content to dance on ice – a much faster way to move.

I was the one holding us up. Oh weh.