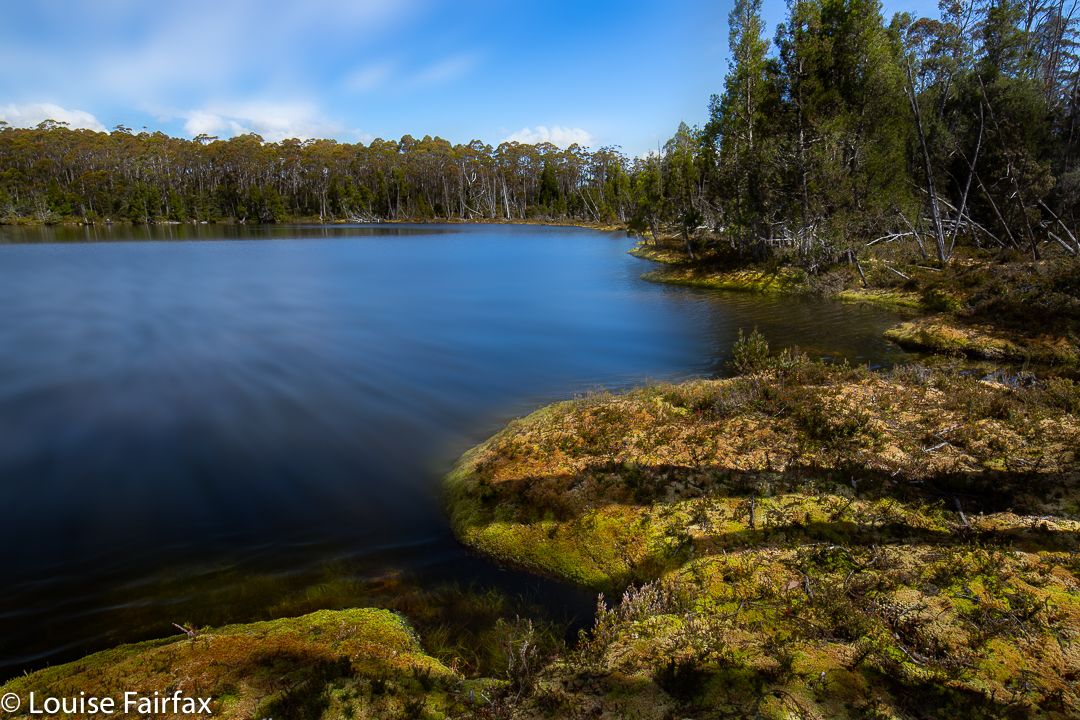 The Mt Pillinger-Lake McCoy circuit has something for everyone. On this day, the final Wednesday of 2020, a small group of us who either don’t work or have organised our lives to have Wednesday off, had an amazing tally of wonders to let us know that 2020 was not all bad.

We saw two waterfalls, three wedge-tailed eagles (up very close; I think they liked my mauve parasol), several different kinds of fungi, masses of wildflowers, the view from the summit of Pillinger, several groves of magnificent Pencil Pines (Athrotaxis cupressoides), vast areas of bouncy and colourful sphagnum moss, a few wilderness valleys that we had not previously explored, and a new lake (Lake McCoy).

This circuit can be done with equal enjoyment, I would think, either clockwise or anti-; we chose anti-.
We parked our cars at the end of the Magges Spur 17 road, and set out down the pretty clear track. After only seven minutes, the track (which ultimately leads to Mt Pillinger or to the Arm River main track, or to any number of other enticing locations) crosses the first of many unnamed Arm R tributaries. As they are nameless, I have just called the first one A, and the second B. The third creek, which we didn’t cross on this route, bears the actual name Arm R; the fourth and fifth are even further west again, and are also unnamed. Tributary A has a pretty little waterfall, shown above.
The second creek we crossed, I have with enormous imagination called Arm R Tributary B, also contains a waterfall worth photographing (see below). We were not getting anywhere fast, but that was never the purpose of the day.

Once we had enjoyed the rainforest, fungi and waterfalls, we climbed slightly (often beside Trib B) out onto the plain that eventually passes under Mt Pillinger. This area has fabulous Pencil Pine groves.

One follows Trib B westwards until there is a saddle so broad and flat that you need a map to tell you it is actually a saddle. Out the other side of the slight swamp and down imperceptibly, you briefly meet the actual Arm R before turning south and beginning the climb up the main Pillinger gully to a saddle before the summit. I have always fancied sleeping in this saddle, or even higher, as there are many flat, clear spots, but water would need to be carried from the tarns of the Arm R at the base if that is what you want to do.

The view from the summit is pretty good, but I never actually enjoy summits in midday glare. The highlight up there for me was the appearance of three huge wedgies who kept circling us at close quarters. I take credit for this, as I’m sure it was the mauve parasol I was using to protect me from the sun that attracted their attention. Their eyes seemed quite focused on it, or so it seemed.

At last we were moving again, and this time, after the Pillinger saddle, in a different direction, south, to and then along a valley with calf-high alpine grass and colourful scoparia (nicely spaced, thanks), cushion plants, and a dainty creek with deep, clear water down the centre.

Our desired lake was to the east of where we were, so we had a couple of unpronounced spurs and appealing valleys to cross before we reached it.

At last we reached our lake; time for another afternoon tea.

The stats are that we walked about 14 “horizontal” kilometres, climbed 382 metres, yielding 17.8 kilometre equivalents.