Mt King William II and Slatters Peak: my first extended bushwalk without my husband to share the load.

View from Slatters Peak on the first evening
All week I feared this walk, mostly because I was going to carry the heaviest pack I have ever carried, and I was unsure whether I was up to the task (normally my husband and I share the load of tent, food, etc). I was also anxious, as gastro had been going around Tasmania, and I had been in bed vomiting on the Monday and Tuesday, and was still feeling frail as the weekend approached. Was I going to cope? Well, I’d have to grin and bear it. I was determined to see these mountains, and determined not to fail. Nonetheless, just in case, and in anticipation of the worst, I signed my will the day before I left! 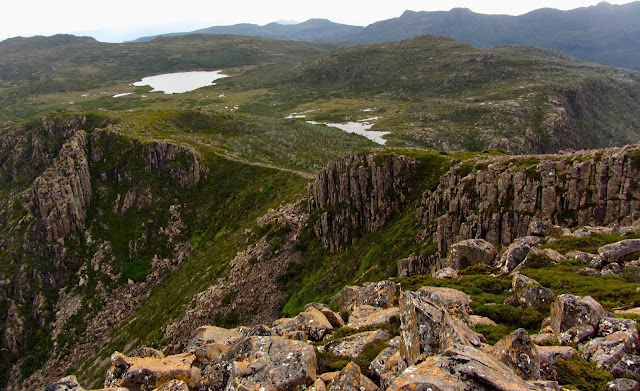 same
Day 1. Slatters Peak. The start was not auspicious. I was quite clearly not welcome amongst the male coterie gathered at the bus stop, and I felt uncomfortable. Oh well. Here I was …
and again

We set out. There would be no track to follow them on should I be too slow – we were heading straight into the bush – so it was keep up or die. I kept up, so busy concentrating on that very task that I didn’t even have time to wonder if my pack was too heavy. I was relieved that my friend S and a new girl, M, were both a bit slower than I was. If I got dropped, they would too, so at least I’d have company. I’d heard our coordinator talking about M on the way: “If she can’t keep up, we’ll just dump her at Fisherman’s Camp and pick her up in three days.” That put great fear into me. My shoelace came undone, but I didn’t dare stop to do it up. To stop was to be left in the middle of nowhere and perish. 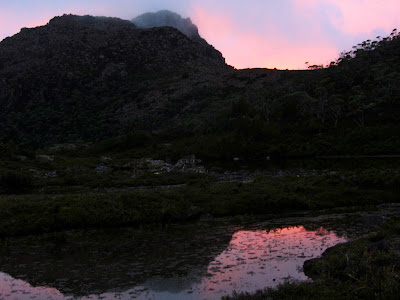 At Fisherman’s Camp I relaxed a tiny bit. I made sure I was always in the first three (of nine) and, concentrating on that job kept all other pack pains and fears away. I raced through the thick button grass, righting myself with celerity if I fell in a mud hole, fearful of failure. Soon enough it was time to attack the real ascent. Up and up we climbed. The bush was super thick. You couldn’t see the person three metres in front. I clung desperately to the rear end of the man ahead of me. The trouble was, these were guys with huge, strong legs, and I was trying to keep pace with them as we hauled ourselves up a near vertical rise, using saplings and shrubs to pull ourselves upwards on the mighty slope. My real problems were the fallen trunks and horizontal scrub or piles of debris with branches jutting out to catch you that they could breeze over but that I had to climb with some effort. I could hear myself grunting like Victoria Azarenka with every single haul. The others said M was grunting too. S’s face was twisted with effort. The guys seemed relaxed. 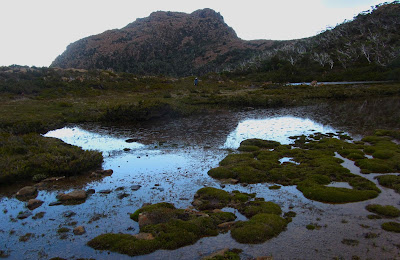 This kept up for two more hours (six in all so far), at the end of which we reached a kind of waterfall-cum-chimney that we needed to ascend. The first bit was even steeper than what we’d done (as near to vertical as you can get in the terrain), and there was one very tricky bit in the middle with few foot (or finger) holds, and with water coming down the rock we were to climb. I grabbed a tiny shrub with the left hand, a patch of grassy stuff with the right. My feet, however, slipped out from under me so I was hanging from the cliff by shrubbery, water rushing past my chest, and a drop below that was considerable. I looked down at one stage and could see M and S’s faces staring up at me – their features were strained with fear, their eyes large. Rod, a nice guy, not from our club, grabbed my wrist and yelled for help, as he couldn’t hold me and he was terrified I’d loosen my grip with fatigue and fall. W (from the club) came back and helped him get my pack off (VERY tricky). Once that weight was gone, I could complete the climb. G got out a rope and did a pack haul for my pack, plus those of S and M. Like me, once they’d lost the weighty packs they were able to complete the climb. We’d just been going for so long and it was all so steep and strenuous that the three of us had lost strength by that stage.
Once we were up, the rest was easy. We danced along to our selected campsite in a wonderful tarn-filled valley at the foot of Slatters Peak. I chose a spot that had the mountain reflected in water visible from my tent ‘window’. Before it got dark, we spent another hour and a half climbing and descending Slatters. The views were stupendous. 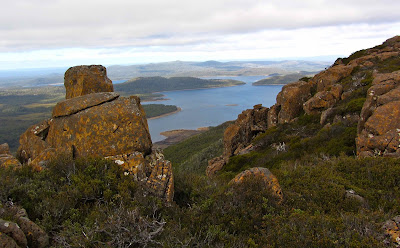 Back at the campsite, we cooked dinner in the fading light. I made a tactical error, as I chatted for too long with the wind ripping through from behind (my feet were still sodden from the day’s activities) and all of a sudden I realised that my core temperature had plummeted right under. My feet never warmed up during the night. I shivered the whole time, despite sleeping in icebreaker, Helly Hanson, fiibrepile, beanie, possum gloves, wollen socks, and Helly longs, with my down jacket over my sleeping bag to add an extra layer, and my overpants over my feet. M and S reported that they, too, shivered all night. Day Two: King William II and IIb. On day 2, marching orders were for 7.30 sharp, so of course we were all in line at the appointed time. Putting on my wet socks and shoes was one of the most unpleasant jobs I have ever done, especially as I was already freezing. M and I walked together. She resented the fact that going to the toilet incurred the risk of being abandoned in the mist. If you wanted a drink, or to go to the toilet, you had to run afterwards to catch up. This day, dropping behind was particularly perilous, as we had about 50 metres visibility due to the thickness of the mist that quickly turned to rain. Re-finding the campsite would have been utterly impossible unaided. M and I stuck together to protect each other. I took photos for her, as my camera was faster, and then we would sprint to catch up afterwards.

There was a certain degree of inconsistency, as sometimes we would have random stops when the leader felt like it, and he would chat in the middle of nowhere, and M and I would freeze while he talked. We both started to get hypothermic. She – and the others, too – decided I was really going under. (They were right). So, who helped me? The experienced people? No. M. She gave me her padded synthetic coat, which was warm when wet, and it made the world of difference, but I was being saved at the expense of the one person in the expedition who could least afford to give me something. With her coat I could keep up and keep the top half of my body warm, even though the bottom half was still frozen solid. My feet were quite numb, which made falling a distinct possibility. Anyway, thus clad we reached the next mountain safely (we had now climbed Mt King William II and a point that is apparently higher, namely, IIb, which has become the true Abel, as it is the highest point on the range, and not the black dot representing King William II). That afternoon it was still raining, and I did not dare to use my trangia inside the tent, so said ‘goodbye’ at 3 p.m, knowing I would get no dinner. I sat in my tent for the rest of the day wearing my lovely dry down jacket, possum gloves and wollen socks that had been saved for nights. Every now and then the rain eased and I poked my head out the tent. The view remained wonderful! Day Three: Next day, we got to slide down the mountain. I had an absolute blast. Everyone agreed not to use that dangerous route of the first day, and so what we did was controlled sliding down 800 ms of mountain using gullies filled with large pineapple grass plants – wonderfully slippery when wet. Such fun. The rain stopped and the sun came out. I loved it. Eventually we made it to the car. I could barely believe I was still alive and had finished.
Despite some less than pleasant moments, I am thrilled I did the walk. It was a challenge that I kind of met. I’m delighted to have seen those views, summitted those peaks (all three), made the acquaintance of some new, wonderful people, and survived my first ever walk where I had to carry absolutely everything myself.