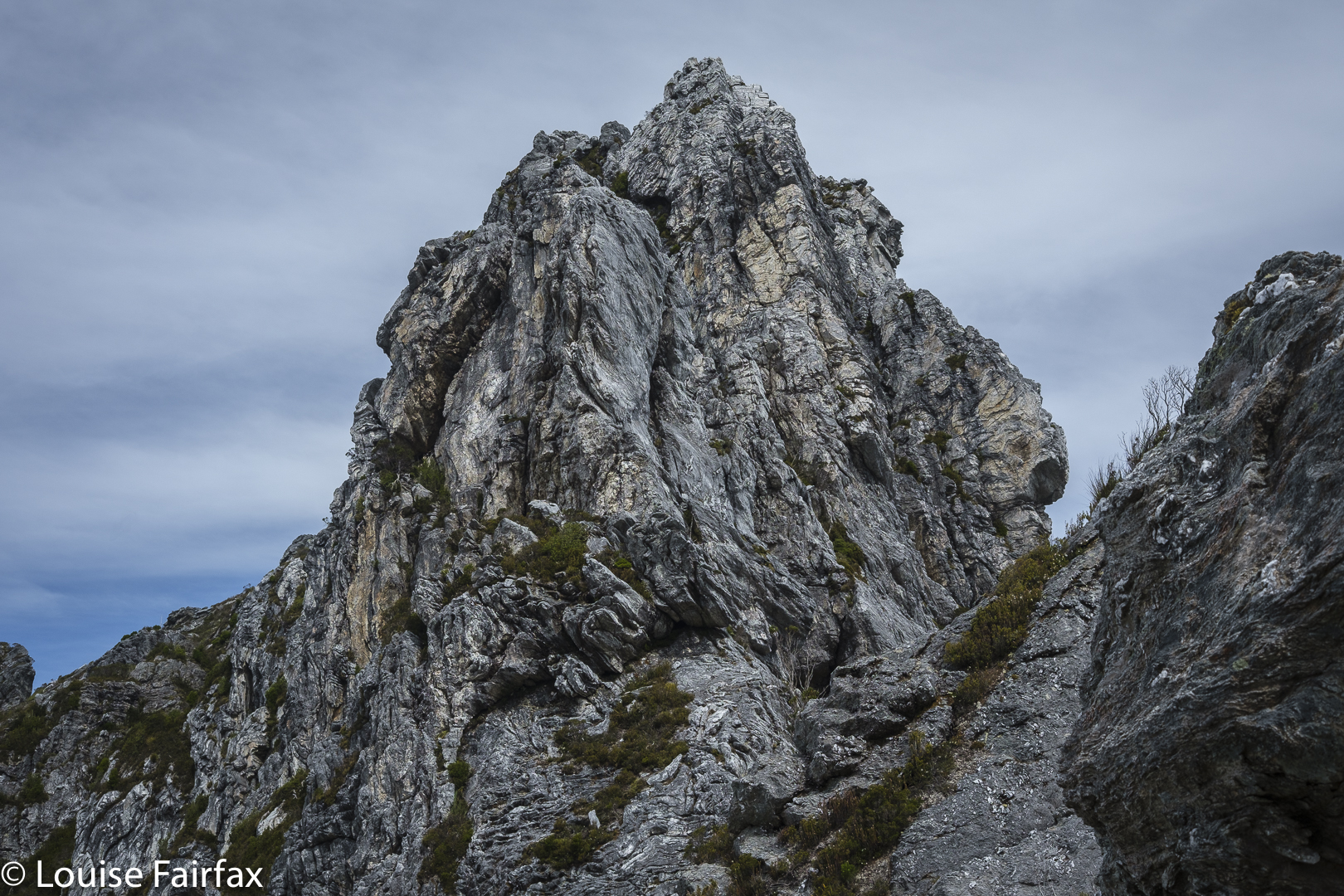 Here we were at another saddle on our supposed climb of Sharlands Peak. It was another dead end with a drop to certain death if we took another step, or peeped over the abyss too enthusiastically. I took another photo to match the mounting collection of “failure saddles”, sighed a meaningful sigh, and withdrew. Again. How many saddles were left for us to try?

The book had merely said to head east to a saddle that had mild exposure. There had been something about a ridge offering dramatic views, as well. Did the writer not remember there are myriad tiny saddles up there? Or that east covers a multitude of general possibilities ranging over a possible eighty-nine degrees? We kept gazing over edges that dropped to eternity below and asked each other: “Does this constitute ‘mildly exposed'”? “Would you call this view ‘dramatic’?”

All the views were dramatic. Every saddle had a certain degree of exposure. How nauseous did you need to feel before you could pronounce: “This must be the one; I can identify it by my stomach.”

We would be on a saddle, looking up a knife-edged ridge that brooked no error: one rock falling out of the collection, one slip and the climber was gone. You couldn’t see what lay beyond the next dodgy climb. Was this where we were supposed to go? There was no point in risking it if it was yet another dead end, but we couldn’t see if there was any use trying from where we were. One of us would climb the next bit and report back on the likelihood of this being the way … or maybe offering A way, even if not THE one.

Now that it is all over, this nervy trial and error seems rather fun, but at the time, my nausea level was mounting, especially when it was my daughter’s turn to try out first and I could see my beloved offspring straining her way up rock that looked too loose for my comfort. She is very experienced and capable, so it seemed terribly condescending to call out: “Be careful. Test each rock hugely before you commit to it.” But love made me want to yell precisely that.

We found ourselves by and by at the top of the landslide. The book had said not to go via the landslide, but it meant not to climb that way from below, and  implied the real danger was lower than we were. Should we keep trying here?
I was beginning to give up, I have to confess. I announced that I had just lost interest in this Abel, and thus in the idea of getting all Abels. I was ignored. Mercifully. We tried yet another tack. My turn to go first. From this knob, I could see a saddle that surely led to the top, and I thought I could make out a possible route that would find us at that saddle. Kirsten came up to get the view and agreed. Here  we go again. This was not the first time this had been said in our tour of these maze-needles. We tried on rough contour. Failed again. Dropped again but not too far and bingo. We could see a possibility of gaining the top.

Yet, even as we climbed this, we had to tack and back a bit in order to get a route that would take us up and not on the flight of our lives. Now that we have successfully done it, it all seems terribly easy. Uncertainty about whether what we were doing was yet another false manoeuvre was part of what was mentally trying. But, I have to say, the whole uncertainty ultimately engendered far more excitement at success than if we had known all along that we would get there.  It was fun having to work it out and do it for ourselves. Too much of our wilderness is being dumbed down. “Wild” and “dumbed down” are actually mutually exclusive, in that the word “wild” has as its antonym “tame”.  Could someone please explain that to our government?

There was the summit stone. I couldn’t care at all about who touches first, but Kirsten wanted us to touch together. It’s a cute ceremony. We did it. I snooped around the back, and called out that I’d found a way of actually getting on top of it. (It was too high at the first point for either of us to scale it.)

With a grunt and an accelerated effort, I gained enough height to then haul myself to be on top. Whoah, it was windy up here, only 2.3 or so metres higher. Kirsten of course, quickly followed. There was not room for a third person up there, but we were only a duo, so that hardly mattered. We briefly enjoyed the view, and descended extremely quickly now that we knew the best route. Our little welcoming tent far below signalled our new goal.

How lovely to reach our tent at last. It had been a long day. We had driven in, walked past the Lake Vera hut (where Kirsten had a swim en passant), climbed Barron Pass in what felt like oppressive heat, enjoyed the view up there, and then gone along to curve around to the valley behind our desired peak. We were filled with joy as we descended. There we were in a a quiet valley, surrounded by astonishing majesty and soothing silence. THIS was wilderness. This was what we’d come for.

Earlier, despite the already very long day, we had made the call to climb this peak today in case the bad weather came in early.  Now we were back at our tiny red haven, we couldn’t have been happier. The evening was mild enough to cook and eat outside and stare at the changing light as we ate our delicious (only in the wilderness) cauliflower and pea dahl – the normal rehydrated, formerly dehydrated fare.

Sharlands was a kind of bonus, brought about by the expected bad weather which had been forecast for the next two days. We had changed plans and now got in a peak while the weather held. Now, if it turned totally sour, at least we had something to show for our efforts. Kirsten had kindly taken a day off work to be with me and climb a mountain together. It was great that her generosity was not in vain.

The next morning, it was not yet raining, and there had only been a couple of light showers during the night, so we decided to head off in the direction of Frenchmans Cap, and maybe climb it, maybe not. The world was our oyster. We’d respond to how we felt.

Of course, we ultimately felt like climbing, even though the weather started to close in (and we had to allow a great deal of time for photography of flowers and views, and for Kirsten to enjoy a swim in Lake Tahune). We were under no pressure, time or otherwise.

We had climbed it together (with Bruce) when Kirsten was a student, so this was a revisit, and in fact, I have now climbed it five times. Familiarity has not bred contempt. This is one heck of a beautiful mountain, and the climb is pure fun – especially on this day, with wildflowers everywhere, with high drama and an approaching storm and with a monster feeling of satisfaction that we had Sharlands Peak on our list of climbed mountains. Three Abels to go. Weeee.

We celebrated at the end of our walk out next day with a ‘works hamburger’ at the Hungry Wombat. After three days of bush fare, I felt unaccustomed to so much real food all in one go, and was uncomfortably full as we continued on our way. It’s Christmas. We boomed out the Messiah as we drove back to Hobart, singing along together with gusto as we headed east.