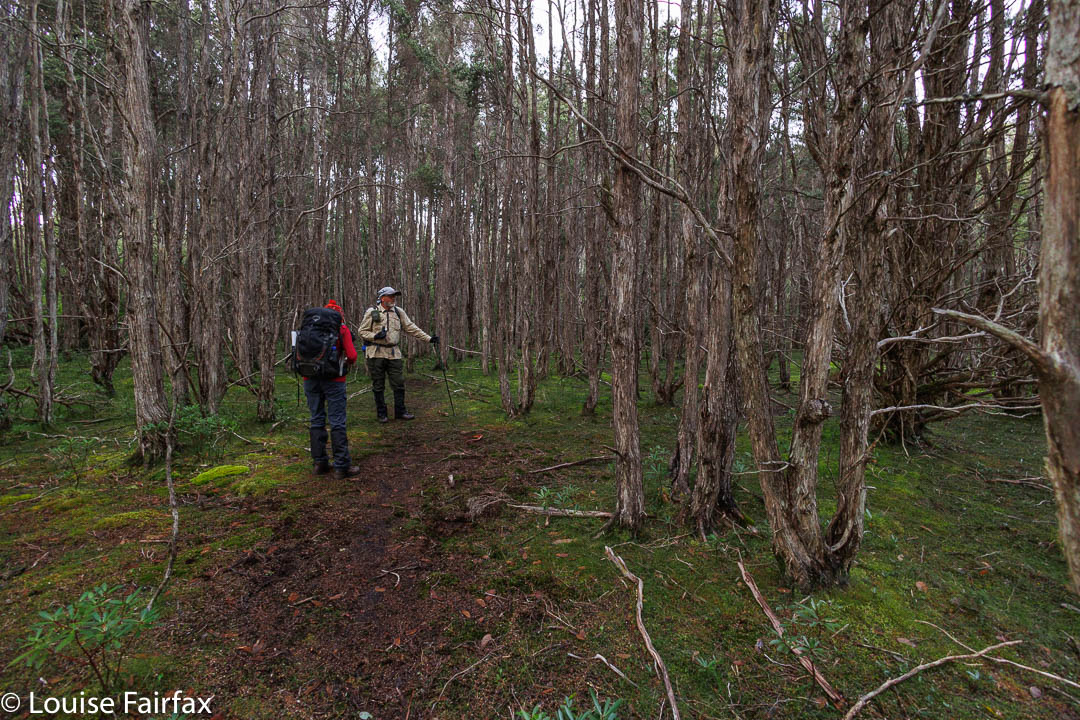 This was only my second visit to the beautiful February Plains. I tend to always want to go up things, or else down cliffs in search of waterfalls. The February Plains involve almost no climbing at all (who counts two hundred metres?) , and no cliffs. You just amble your way through often very open forest – at best, myrtle forest – or along wide, flattish glacial valleys with ankle-high vegetation.

It is nice to have a goal for one’s ambles, and February Plains provide several excellent ones, part of which is a visit to the old huts of possum-trapper and snarer, Basil Steers.

On Wednesday, a small clutch of us visited the two huts left standing, as well as two ruins, where we searched for scraps of tin to indicate that a hut had once been there. We also navigated ourselves to the old Innes Track, where bits remain, which we also examined. We could manage to follow it for a little, before signs of its former existence petered out. This was intended to be a long track, from Liena on the Mersey to Rosebery and the mines on the west coast. The idea was no doubt good, but the reality of the terrain and the distance, inter alia, held the trump card. It was a failure, but by no means because of the excellent surveying done by Innes. The Innes Falls are also named after him: what a beautiful place to be remembered by.

As we headed down to Sardine Creek, right near the end, someone said: “Look. Little Horn.” You wouldn’t believe how close it appeared to be. On this day, it was still covered in white from last Friday’s snow.

Somehow or other, we managed to clock up nearly 16 horizontal kilometres plus 277 ms of climb. That was very inventive of us. And right near the end, we got another aspect of interesting and important history. Brian O’Burne, one of the small group I was in, had been part of a blockade trying to save the February Plains from the destruction of Gunns. He showed us various aspects related to the struggle and amused us with tales of being put in gaol and taken to court for daring to protect an area of stunning beauty. I’m so very glad they won. Once you kill an ancient forest, it is gone forever.

It is hard to believe, looking at barren Afghanistan, that it once had beautiful forest. The Russians cut down trees at the rate of 200 trucks of timber per day, following their invasion of the country in December 1979. Their destruction of this neighbouring country seems very similar to what they are currently doing to a different bordering neighbour, this time, Ukraine. The world around us seems threatening and in turmoil. How wonderful to retreat into the wilderness. Even a single day refreshes us and reminds us of the healing powers provided by a retreat into a realm of calming green, open spaces and rugged wildness.