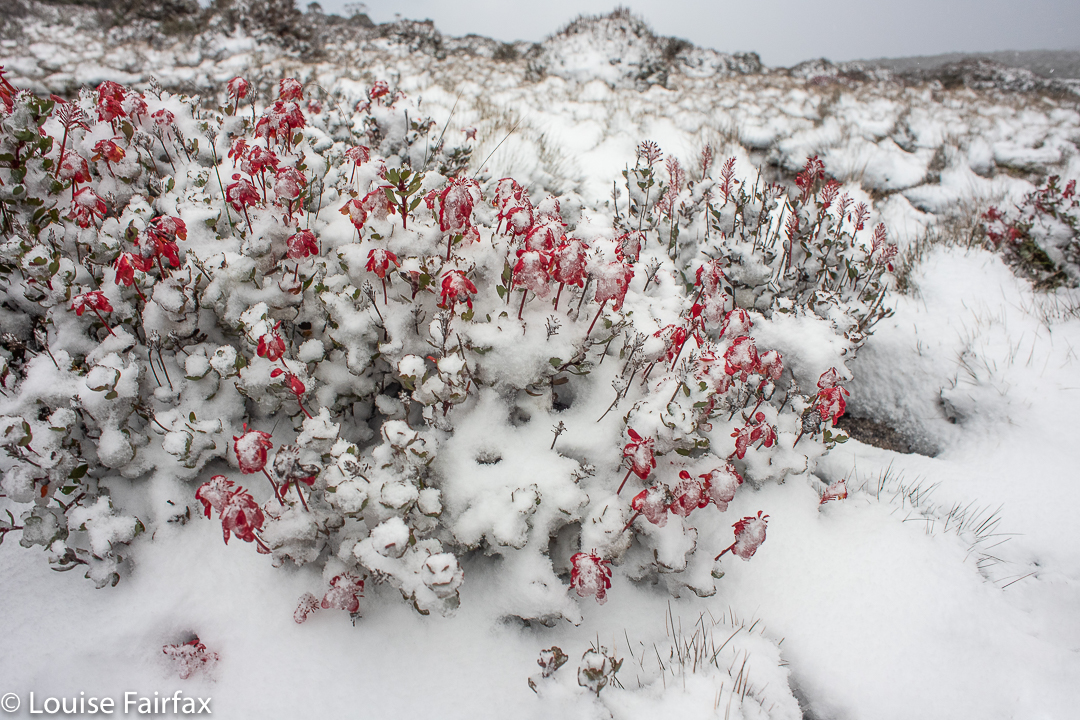 To overnight it at Lady Lake had not exactly been our number one choice, but with further west promising rain if we were down low, and blizzards if up high, Lady Lake looked as if it were a more benign alternative, so we settled on it as our destination. Camping had been on our agenda for this weekend for months. It was the first weekend of the school holidays for the end of Term 1.

As we donned our packs, the drizzle was only light. I knew the forest would protect us, and it did. Two of us were wearing shorts. It was not cold down there. Nobody bothered with anoraks. Up we climbed. It was not far at all but it was very, very steep, so that once you factored that into the equation, it was a very demanding slope for young Abby (5). I thought it could take her two hours, and it nearly did.

At some stage in there, Abby needed a lolly break – she was doing all the walking herself, and enjoys lolly treats as motivation. The pace had been pretty slow, and Keith had mercy on Kirsten, Gus and me and said we could go on a bit faster and he would stay with Abby. We were thankful. On we pushed at a more comfortable speed.

Gus (9) moves at a pace that is very reasonable, especially if I am carrying a full pack, which, of course, I was doing right now. He carries some gear, but his noble parents take the lion’s share of the weight. Their packs are ginormous, as both parents are keen to cater for every emergency a child might experience, and then a bit more. They also fear the children might need to eat twice their normal amount with all that exercise, and cater accordingly.
The forest had been magic right from the start – it is exceptionally lush forest – but when light drizzle morphed into gently falling snowflakes, it became totally entrancing. All three of us were very, very excited, and shared our joy as we climbed ever higher.

To have a quick break and to motivate Gus, I got out the map to show him how far he’d come, and how much was left. We were all pleased with our progress up the slope. I told him the forest type would be changing very soon, and indeed it did. The beautiful green moss with myrtles gradually ceded to drier traditional bush. It became much lighter as the darkness of the dense forest lingered behind us. We would soon be above the tree line. Gus and Kirsten were still in shorts. Even by now, the elements did not invite stopping to change: it was much better to go at a fast pace to some shelter than to linger in what was now a storm and peel off clothes to put on warmer ones.

Bash. We hit the open plains. Whoah. Blizzard it was! The wind-driven arrows of ice pierced our faces. Heads retreated into our chests. Every time I tried to look up to see where we were going, I got mightily stung, sometimes in the eye. I could hear poor darling Gus whimpering. We offered words of encouragement, and Kirsten took his hand, partly for security and comfort, partly for guidance. She led with one hand held behind her, to reach him. I came in third, glad I didn’t have to guide us. Even staying on the boards that were on top was difficult. We were on a mission to get Gussy across this open wind tunnel and into the protection of the trees beyond.

Once there, things were better, and soon we came to the small hut that is up there. It is unheated, but being out of the wind would be a huge benefit. Later, a tent would be pitched for extra warmth, but having the hut to get changed in, and eat in, would be a massive bonus. We also used it to do repeated “7-minute workouts” during the afternoon to keep warm, with a final one just before going to bed to make sure we were nice and warm getting into our bags.

Kirsten quickly popped on her over-trousers, and some extra warm gear for Abby, and ran backwards to help Keith. I was there to help young Gus get out of his wet shorts and into his thermals and puffer jacket. He was incapable of even getting his shoes off, he was so cold. His hands lacked strength. I undid his laces and tugged with all my might, and eventually we got them off. I popped him into his ski gloves and beanie while I removed more wet clothes and replaced them with dry. That achieved, I got out food and sat him at the table to eat. Now he was smiling again. By the time he had finished his cheese and bacon roll, Abby and her parents appeared. Although she was surely cold, she seemed in exceptionally good spirits. Soon enough, they were all devouring hot noodles which raised the body temperature.

The children had had enough snow by then, but Kirsten and I wanted more exercise, so off we set into the blizzard once the children were happily playing games with their dad. We had no special destination, but after exploring Lady Lake, we decided to go in the direction of Lake Lucy Long. The more the snow fell, the prettier our scenery became.

By the time we got back, the bit of light that existed was starting to get close-of-day hues. Unfortunately at this point, I needed the toilet. The toilet at this hut is very well hidden, but I found it. Kirsten offered to go to the hut to get paper and bring it to me, for there wouldn’t be paper provided. Ever sat on a toilet in a blizzard waiting for paper? Oh it’s such fun!!! The outhouse has only three sides, and those sides are more screens for privacy than walls of protection. The snow lashed me while I waited, bare skin exposed.

I forgot my discomfort quickly, however, as the evening was growing more beautiful every second, and I wandered about the open plains with my tripod and camera, enjoying the light and photographing it.

That evening, we could tell Abby needed the toilet, but she refused to admit to her need. She did NOT want to go out there into the howling wind and beating snow. Somehow her parents convinced her that if she had an accident in her sleeping bag she would be very cold and uncomfortable. She heeded the advice. We made her a hot water bottle, and she went into the tent with her mum. We didn’t hear another peep out of her. Everybody slept very soundly. I hugged my water bottle, my body heat enhanced by our final 7-minute workout.

Dawn was magic, as my photographs testify. I was so thrilled that Gussy came out to enjoy it too. His Poppa would have been proud of him. Bruce enjoyed sunrise and sunset with me without fail, often waking me up if he feared I might be about to miss it. After breakfast, we had snow fights and more photography before girding our loins and setting off into the area of greatest exposure. Luckily for our speed and her safety, Abby agreed to being carried until the forest section began.

After I got home, I had maybe the longest hottest shower I have ever had. I hadn’t felt particularly cold out there, but I guess the blizzardy, exposed section took more out of me than I realised. Back near the cars, I heard two people going up the slope talking about “what a cute, amazing little trooper”. It made me assess what tiny Abby had done from their eyes: it was a pretty amazing effort. I hope she remembers it with glee.
For summer views, see http://www.natureloverswalks.com/higgs-track-lady-lake/