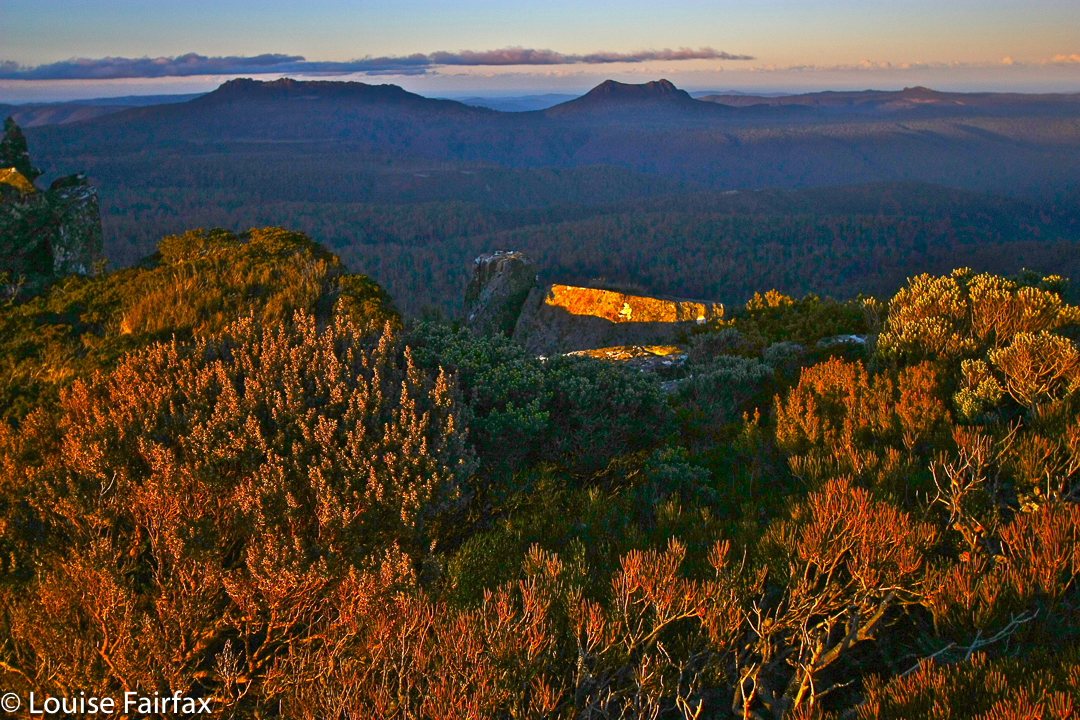 By the time I pulled into the ‘space’ for cars below Mt Albert I was already seriously questioning the sanity of climbing the mountain this late. It had been a ridiculously slow trip, not helped in the slightest by my decision to indulge in cake and coffee in Lilydale, … but the German apple cake from The Bean Barrow is so good, and they are only open a few days a week. How can you go past without having some? No idea. I always stop.
It was 4.10 and I wasn’t yet in my bushwalking clothes (that would push it to nearer 4.25 before I was ready to get going). Ah well. Let’s get out of the car and go to the toilet and then think about whether there was any point in climbing this late.

OH NO!!!!! My back left tyre was flatter than flat. I must have had a blow out. Whoah. How can that happen on a road that is not in bad condition? OK. Now I was in almost panic mode. All of a sudden I had no choice in whether or not I would climb this mountain. I had to climb it in order to get phone reception to call the RACT to help me change the tyre. Sorry folks, but tyres feel like they weigh almost as much as I do so that I can’t even pull them out of the boot, let alone place them in position on the axel. Also, even when jumping on the lever to undo the screws, I do not exert enough force to budge the fulcrum to move the screws to undo them. I needed help and urgently. It would go well below freezing overnight, and my dog was locked outside back at home.
First job: put on walking clothes. I was still in my running gear from earlier in the day, and already the temperature was nearing zero. The air had a stinging nip to it.
Stuff grabbed, off I set. Now 4.22, on one of the shortest days of the year, and at this time of year, Tassie’s beautiful long twilights do not take place. Darkness very quickly follows sunset. I had to hurry. I remembered Albert as being a quick climb. I hoped my memory was good. First memory fault: almost as soon as I began the walk, I entered a huge patch of ferns where the fronds met each other across the pad that presumably lay beneath. That was going to be impossible to detect in the dark that would accompany my return. Problem for later. On I pressed. I needed help and that meant I needed to be on top of this mountain.
There were pink tapes to guide a bit but they would also be invisible once darkness set in. No one had done work on maintenance in this area for a long time. Of course there were fallen trees to climb over. Would I find them in the dark? Who knew? Not I. On I went. Up up, climbing as quickly as I could.
Then there were confusing bits where even in this light I had to scout around for the best route. What on earth would I do on the way back? Maybe it would be easier when I couldn’t see. Ha.

Then I came to a bit that really scared me. There had been small sections where the rocks were steep and slippery, but this was different. The rock was very wet, had little grip, no footholds and only the most meagre of twiglets for my hands to grab on the right hand side; nothing further over on the left. I took this bit really slowly. Below me was a three or four metre drop onto jagged rocks: not enough to kill me unless I fell very badly, but enough to break a bone if I found myself travelling downwards out of control, and if I slipped or the twiglets broke, that would be my fate. I would not do this bit on the way back. Somehow I’d have to find a way around it.
Up up. At last I had topped out enough to try for phone reception. Hallelujah. There was a bar. Would it be enough? I googled RACT roadside assistance, and yes, google worked. Well, that is, google fed me with stuff, but the stuff was just an endless series of adds for how I could buy assistance … or insurance if I would prefer. I scrolled and scrolled, but never got a phone number. I tried out my memory. I was obviously close, as I got NRMA, the NSW equivalent. They put me through the endless series of loops and hoops that I just didn’t have time for in this emergency. The sky was a pretty red; the sun was now below the horizon. I had very little light left already to fund my return journey, and I couldn’t afford the luxury of dealing with stupid computer systems. I needed a human. I phoned my daughter, usually busy and more than often nowhere near her phone. Luck was there. She answered. Hoorah. I told her my situation as briefly as possible and asked her to find the number of RACT and get them to me as quickly as possible. I needed to start down the mountain while the going was good.
She must have been very successful, as the RACT called me whilst I was still in range. The very nice girl, however, didn’t seem to understand the word “emergency” and wanted to know the car number (totally irrelevant; I was the only fool in my location), whether the car was automatic or manual and other  questions that came across to me as a terrible waste of time in what was becoming a crisis. The climbing was too tricky to do with one hand instead of two, so I was losing precious light, a commodity I could not regain. At last I got my urgency through to her, and she let me keep climbing down.
I had to get past the really dangerous bit. I stared at it. Nope, I just couldn’t do, not even with hardly any light so that many of the dangers were no longer visible (and thus less confronting). I decided to bushbash off to the side rather than risk a fall.
Down lower and back on track, every time I lost it and later refound it by accident, I marvelled that I had done so, and gave thanks. Being on the pad was going to be more efficient than bashing, and I would be less likely to hit something and hurt myself if I were on the pad.
And thus it was that with my admix of bashing and somehow remaining on the pad, losing and then finding a more traversed section of land than otherwise, the ribbon of light that was the final section of my journey – made so by the fact that it was under 10 cms or so of water – came into view.
I was back at the car, and now just had to wait another hour and a half to be rescued. At this stage, I became very glad I had indulged at Lilydale. I pulled the final third of my German apple cake from the serviette in which I’d wrapped it, and ate it slowly, savouring the juicy taste while I watched the Milky Way above take a more defined shape as light vanished from the night sky. The temperature dropped some more.
When my children were aged 1 and 3, we used to bushwalk with dear friends from Armidale every weekend, and on these walks we never ever made it back to the car in the light. It always added to the sense of adventure. I wonder if the children have any memories of those grand days of feeling our way through the bush in the dark, laughing our way through the wilderness.
Sorry for the lack of usual photos dear Reader (and for the very old photo used as the “featured image”. I’ll renew it as soon as I can, which will no doubt be a few weeks). As you can tell from the story, I was kind of too busy to think about such things. I will have to visit Albert yet again to take some more photos. However, I have no wish to ever climb down it in the dark again – or, not solo and in mid winter. I do love an adventure, but there are limits.
The RACT guy said: “You went up THERE at sunset?”
“I had to, to get reception. ”
“I took my teenage son up there and he came home with his knee dashed to pieces. I took another group up there and they never made it. There is a reason the track notes say it’s very dangerous.”
Yeah. I get it. One Reply to “Albert: an unplanned adventure”