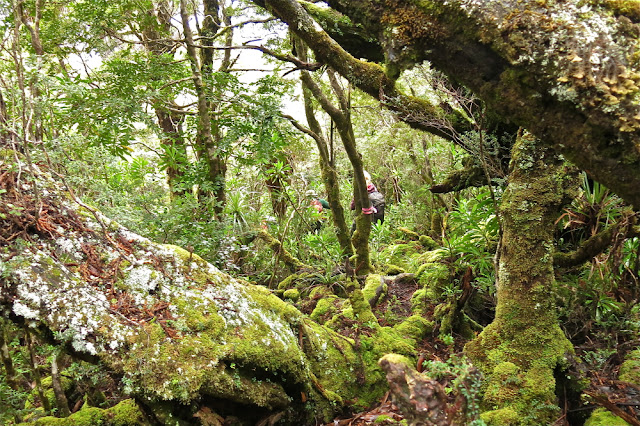 For some reason – well, actually, for a very good reason – I was a bit scared of Mt Dundas. As you may have gathered from photos, ice and snow dominate our scenery at present. Fine. Beautiful. The trouble is, this mountain begins with a river crossing, and we were under the impression the water would be knee deep at best (thigh at worst) and rushing. I would be climbing in snow with sodden feet, a sure recipe for personal misery and possible hypothermia. I was so anxious I even had nightmares as darkness morphed to dawn. Gulp. Here comes day: my moment of testing. Monika negotiates the rocks near the summit

Down we went to inspect the infamous creek, scene of my sure doom. Hey. There was a branch I could clutch and swing from – Tarzan’s wife – over the slippery, slightly submerged rocks. I didn’t need to get my feet wet. I don’t know why I had imagined that Dundas wouldn’t have rainforest at its base like almost every other mountain in Tasmania. Perhaps because nearby Tyndall is not impressive in this aspect. All I did know was that there was an old road one followed for a while after crossing the creek, and that it was “very overgrown”.  Well, yes, it was … a bit … but not so much that it was a problem. Up we climbed through glorious, lush, mossy forest to the point where “road” became pad, replete with tape in several hues. My favourite section was the stand of King Billy pines that rendered the path a carpet of textured needles in various shades of brown. My second favourite was when this was replaced by a different study in brown and ochres made by fallen fagus leaves. Kent and Monica on the summit

Once we mounted the top of this ridge, the land flattened out for a section of tiny wombat pads through low lying scrub, one pad of which was used by humans. The final climb was now visible, but the summit still seemed a long way off – both in terms of vertical and horizontal distance. It seemed to me that it was too far away to be achievable on this short winter’s day. I pessimistically predicted failure to my two companions who betted on the contrary that we’d be there by half past one. I owe Kent a cake at Zeps, I am very pleased to say. I like placing bets that I hope to lose. Not at all deterred by the possibility of having to buy cake, on we continued, taking especial care in the snow. I happened to be the one making the footprints in the end game, and needed to be particularly careful: it’s easy to assume there’s a rock under the snow and to fall and hurt yourself if there isn’t. Aware as I was of the dangers in this section, I was simultaneously aware of how grateful I was to Rupert for putting on the walk, and to HWC for enabling me to connect with others who are crazy enough to find climbing a mountain in mist and snow to be a fun idea. I know we are not the norm. I was thrilled by the thwarting of my own pessimism when at last out of the gloom a mound appeared that was definitely the summit. Several false promising ones had made their appearance as we climbed, but this one had no shapes beyond. At last there really was nothing higher to climb, and Kent and Monica had even been a half hour too pessimistic in their own estimation of when we’d get there. Every member of the party had reached the top before one, and in fact, we had descended a bit and finished (a very quick) lunch by one thirty. The reason for the speed was not gluttony, but rather freezing fingers and toes that made picnicking in the snow a little less than pure delight. Moving was the best solution to the freezing problem. Cold it may well have been, but I feel very privileged to have seen and climbed Dundas in the snow. I loved this mountain, and will return one day to admire her summer outfit and linger longer on the top. A real, paper map will give you the context of where that lower waypoint is – scene of road end and where we parked the car. We then followed the obvious road until a cairn (NOT very far) indicated the path down to the river. After crossing, the old path that will lead you upwards is to be found on your right, and is indicated on the map above by the more easterly path which followed the road the whole way. The upper waypoint (2 of 3) is where the old road ends and the pad begins; basically, if you are heading up to the sharpest part of the spur you can’t miss it.