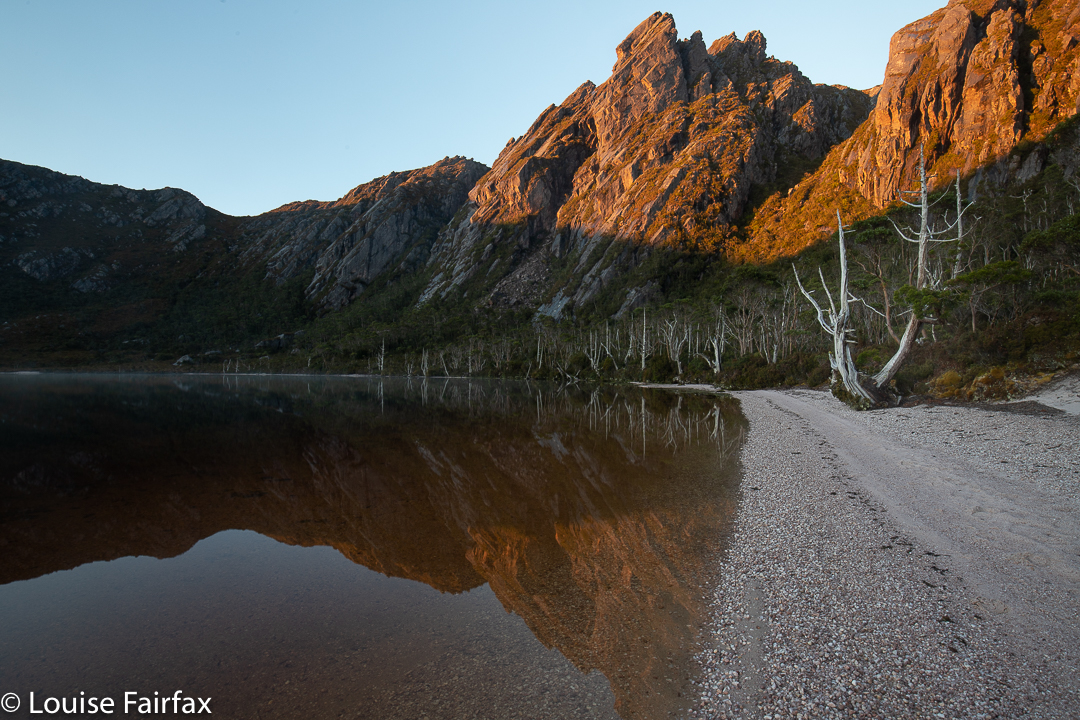 It was “third time lucky” for my desire to climb Reeds Peak and Bonds Craig, and to see the famous Lake Rhona.
The first time I tried, which I was going to do with my daughter, the weather was so foul that as we drove west and eyed up the torrential rain, we opted to stay that night at Strathgordon Lodge instead and to just have a single night on top of Mt Sprent as a substitute for the longer undertaking.
My second attempt was a solo one, but I was turned around because of the aborning bushfires. I spent that night on Tim Shea, watching on helplessly whilst huge tracts of land that I love fell under the doom of flame. The scorches were still in evidence this trip, and my face was black when I came out of the bush.

And here I was for attempt number three, once more with my daughter. It looked as if this trip would yield a similar fate to that of the first two attempts: the forecast was for gale force winds, snow and temperatures of a MAX of minus one by day and a minimum of minus four overnight. Of course, with the wind-chill factor, those temperatures would be even colder. Recipe for a glorious three days, huh? I wasn’t even sure if we would get over the Gordon River, which you have to cross using a fallen log. If the log was icy and slippery, we would not get far towards our goal. I had a few “Plan B”s in my head, just in case.

I was certainly not going to let myself get one bit excited about this trip before I inspected the river and the log, which is only about 30 minutes from the car. As it came into sight, we could see that the river was quite swollen, and only had about 10cms to go before it would cover the log and make it dangerous. But right now, we could cross, and in safety, so that we did, with me crossing twice: once with my rucksack, and once with my camera, just in case I met with catastrophe. If I fell in, I didn’t want to be taking care of too many things at once.

Over the other side, the former forest was very charred, but as we wended our way further towards Gordonvale, the amount of green increased. Signs of fire, however, stayed with us right up to, and including, the lake. There was a definite line visible from the lake where someone had paid to have sprinklers put in to protect his precious Lake Rhona. Thank you, whoever you are, for helping protect our magnificent wilderness from ravages brought about by climate change and humans’ selfish interference with the environment.
Rain began soon after we crossed the river: light at first, but with increasing determination. Kirsten called it “quietly achieving rain” – the achievement being to get us soaked, I assume. It was also successful in making me clumsy, as I had my big camera, gps and phone, all of which now needed to be transferred to drysacks, to be then tucked under my anorak before the pack straps got buckled. I made the Michelin man look skinny.

There were many creeks after Gordonvale, normally nothing noticeable, but today they were raging, of unknown depth, and not offering any easy places to cross. Partly because of my electronic gear, and possibly also because I was still tired having only just finished my Geryon trip, I didn’t feel strong enough to trust my footing in water like that, so went up and down the banks of each creek looking for a place where I could be guaranteed to cross without mishap. The actual crossing of each one was slowly and carefully done, using sticks for stability. The rocks were slippery and the water strong. People and cameras stayed fine.

And so, inch by inch with the weary load, and by the power of the luring goad, the distant goal was won. Yes, we two kept moving on … and finally up, until, at last, we peeped over the edge of a small rising and there was the famous Lake Rhona; no mistaking it. Photo time for sure, although I later threw these ones out. They were mere photos of excitement.
In the bowl-shaped depression of the lake, there was shelter from the blast, which had been spearing us with icicles for quite a while. Now, it was “just” snowing with gentle, fat flakes, and the wind could be heard higher up, but it was not buffeting us where we were. Nonetheless, we chose our spot carefully, as we would be pitching on sand, so the pegs wouldn’t stand for too much force.

It was squashy with two in a solo tent, but at least it’s a Hilleberg, so pretty spacious for one. Our packs went in the vestibule after dinner, and our poor shoes got relegated to the outside world to be covered in snow during the night. (We popped a pack cover over them). Luckily no one needed the toilet during the night.
Morning, however, meant we did have to use said questionable “facility”, which was no easy matter. (For non-Taswegians who don’t know these things, there is no roof over your head). The lid on the seat was covered in a 3cm-thick layer of solid ice. Turning the knob to undo the lid was out of the question. Kirsten discovered she could lift the entire toilet off its hinges, so moved it away in order to access the hole. I later had to do the same, and thought whilst squatting in the snow over a small hole with wind blowing the flakes around my face and the toilet itself upended behind me, that the situation was possibly not to everyone’s liking.

It snowed on and off all morning, teasing us. Each time we thought it had cleared and went for a tiny walk along the beach preparatory to packing for the climb we wanted to do, the snow and wind freshened their efforts. At about 11.30, I said I wanted to do a proper walk anyway; these bits of walks weren’t doing it for me, and I knew Kirsten would be in total agreement, so we went back, ate an early lunch and at about 12.30 set out upwards, with no special goal other than having some exercise in mind. BUT, we were, of course, setting off in the direction of Reeds Peak. Should the weather improve, then we’d be ready for the climb.

It was still snowing as we summitted, but only lightly. What made the final ascent dangerous was not the snow, or the wind, but the thick rime coating the rocks, making them very slippery indeed. I was not one scrap comfortable up there. I touched and said I wanted to go down straight away. I would not relax before we got out of the rocks and back onto the grassy ledge at the base of the final climb.

On the way down, we noticed a kind of lead which Kirsten felt compelled to examine. It was kind of a back door entrance to the mountain which would have made a much easier climb than the one we had just done, and now made an excellent route for the descent. It was heading in the direction of Bonds Craig. I was not one bit committed to this mountain, but we both wanted more exercise than we’d had so far (only 1.5 hrs at this stage), so off we set.

The terrain is beautiful up high, with moist alpine meadows. The section between Reeds and Bonds was less fertile, but we still enjoyed it, although the wind was starting to get at me. Bonds Craig was nothing more than a slightly darker shadow in the thick mist, but we strode purposefully towards it. We’d at least inspect the base and initial climb. It gained in form as we drew nearer. It even stopped snowing for a bit. Once faced with the beasty itself, we both felt fine about summitting, even though it was very misty on top, with no views to speak of. The small area in between the summit rock and a false summit offered some protection.

Be that as it may, however, I wanted a proper rest out of the wind, so not long into our return journey, we dropped over the edge to a sheltered area at the top of the steep but leeward side, and had a snack. The book had said it was feasible to take a short and steep route back to Rhona, but we had really enjoyed being up high and feeling the space and seeing the views and the alpine vegetation and were in no particular hurry to sit in the tent again, so we voted for returning the way we’d come and enjoying the experience of the ascent in reverse. Somewhere and when in there, the snow stopped and the wind began to abate.

The next morning, the skies were so clear Kirsten muttered from the comfort of her sleeping bag about a swim. She announced once she’d been outside that perhaps she needed to rethink this matter. Meanwhile, we had the important job of photographing the dawn, and meeting some of the people who’d arrived while we were having dinner the night before, camped at the far end of the beach.

By 11 am, the swim became a reality. We were not in a rush, as the newcomers brought with them the news that the river was now over the log. If we delayed a bit, it might decrease sufficiently to let us back over. By 5 pm, it had gone down enough to kind of let us across … crawling for safety. Not for the first time this trip, my daughter took the camera for me. She does some pretty scary stuff holding her kids, so I trust her with my camera far more than I trust myself. The log was very slippery indeed. Ever crawled in 25 cms of water on a log over a strong, wide river? Such fun. We are both strong swimmers, but if you go in the drink over your head, you must release the pack, and you might never see it again if you do that. That knowledge adds pressure.

Also, I have never swum in bushwalking boots, and was not keen for a first experience of that one, either.
But having successfully crossed the danger, Kirsten then stripped off and had a quick swim in a protected backwater …. just ’cause it’s the famous Gordon River, just ’cause it’s the wilderness … just ’cause she could. Isn’t that sort of thing part of what being in the wilderness is all about? I have pictures of this daughter swimming with icebergs. There is a lot of her beloved dad in her. :-).  Her mum’s a wuss.

(If you are not experienced in these matters, please note that before you ever begin crossing a deep river, you must release all buckles, as if you are submerged, they will probably be pretty impossible to undo, and you will drown if you don’t. Undoing buckles is not the first thing people think of, but it is essential.)