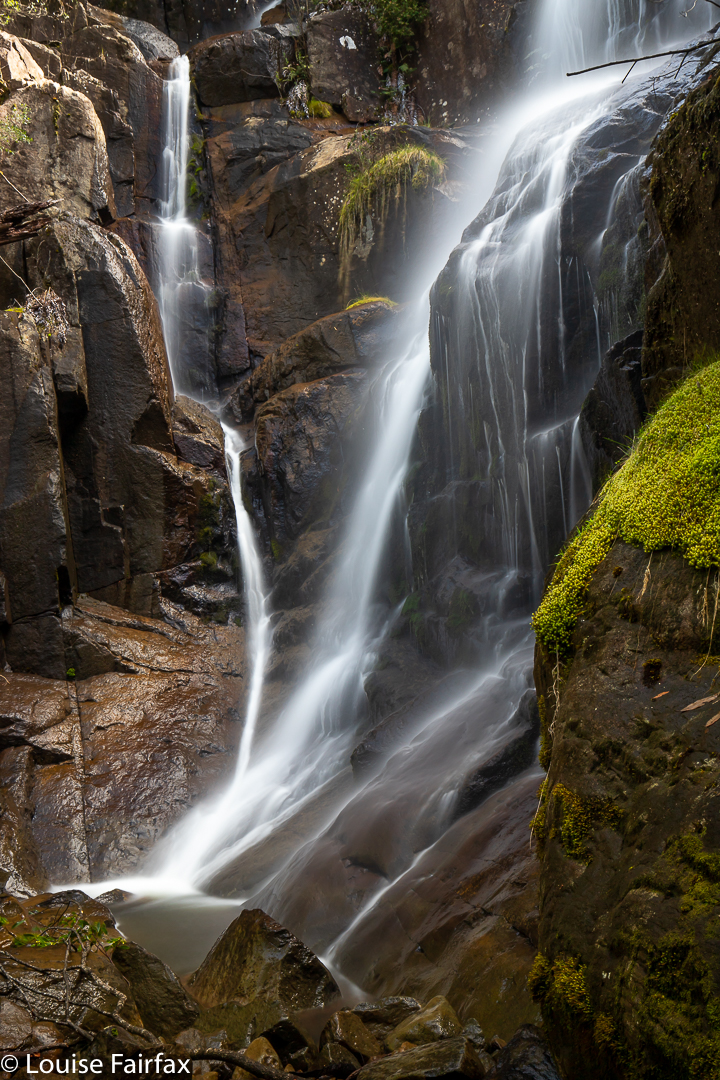 There I stood at the top of Dora Falls, gazing down to an abyss below. How on earth would I get down there? The drop seemed as infinite as it was vertical, and any spot where verticality gave way to a degree or two of slope, the trees were a mess of impenetrable tangle. I was, yet again, solo, and was totally unwilling to lower myself down something I might not be able to climb back out of later. I basically gave up. “Oh well,” I said to myself, “at least you’ve bagged Dora Falls. This is probably it for the day. It was a nice little excursion.” I took a shot for the records, the one shown below.

However, being the sort of person who does not give up easily, I decided to take one more look at the map to see if it gave me any hints, and indeed it did. I noticed that on the other side of the creek, the contours were more spaced than on this side. Perhaps that was a clue that would open the key to the treasure. I would not give up yet, but would cross the creek and give that a go.
It had taken me 17 minutes to reach Dora Creek from the car, and I had just wasted a further 23 trying to crack the code to the base. Perhaps if I had gone further on that western side I would have found something doable, but here I was back where I’d arrived, crossing over. I had already determined I would use the point of the spur rather than the creek’s edge, and carried out my plan. Presto. 8 minutes later I was at the base of my holy grail. The little “den” was mossy and had a special silence that would have had me whispering had someone been there with me. I was captivated, and so very glad that I’d persevered.

Now I felt confident that I could use the same spur to reach Eldon Falls. Up I climbed. It was not hard at all, and it was mossy and wonderful. I went up the spur for 14 minutes from Dora’s base until I was on contour with where I had waymarked my best guess at Eldon Falls, and then just sidled around the spur keeping height for another 13 minutes. Tra la. There I stood at the base of my next goal.

This one wasn’t as beautiful as Dora, but was still well worth the visit. Photography finished, I decided to go straight up and over the spur above rather than retracing my steps. It meant possibly more contours, but I have always been rather careless when it comes to contours, so up I went, thinking this would be more interesting than a retrace.

And so it was. After 21 minutes, I had crested the spur and then dropped into a higher region of Dora Creek, and what should I find but an area of delightful cascades. The bank next to them was very steep and cluttered, and I didn’t feel like foraging for a possible route to visit all of what I had found. I reached a place that looked like I could get across, and photographed that particular cascade, which was possibly the best anyway. At least that one looked “climb-upable” on the opposite side. These cascades seemed quite well fortified by small cliffs.

From there I continued west until I hit the edge of the public-private boundary, and followed that back to the car. (There is a pad that weaves along through the forest up the top there, following the boundary. There is also, at some points, a “road” [maybe at all points], but I didn’t use it, always preferring the green and shade of forest, even to the ease of a road, especially when it is a glary machine-made  one with clear felling on one side of it.) The circuit thus took a shade under 1 hr 30’s walking IF you don’t count photography and the 23 minutes I spent stuffing around on the western side of Dora trying to find a way down.
Not only did I find great beauty, but I also had a fun adventure, and the pleasure of “doing it myself”: the joy of discovery and overcoming obstacles. That was, I fear, because this is a southern waterfall, and Hobartians do not feel the need to stick pink tape through every section of forest to spoil the fun of others who want to do it themselves. Pink tape is ugly, totally unnatural, and destructive. I thought we were trying to rid our planet – and especially our wild and beautiful places – of plastic, but in the north, every waterfall, it seems, is festooned with plastic, even ones with a very obvious path leading to them. Someone estimates the general IQ of fellows living in the north to be somewhere around 60.
Time for lunch at my favourite red cafe in Huonville. Well, I bought lunch and picnicked by the river there, it was such magnificent day.