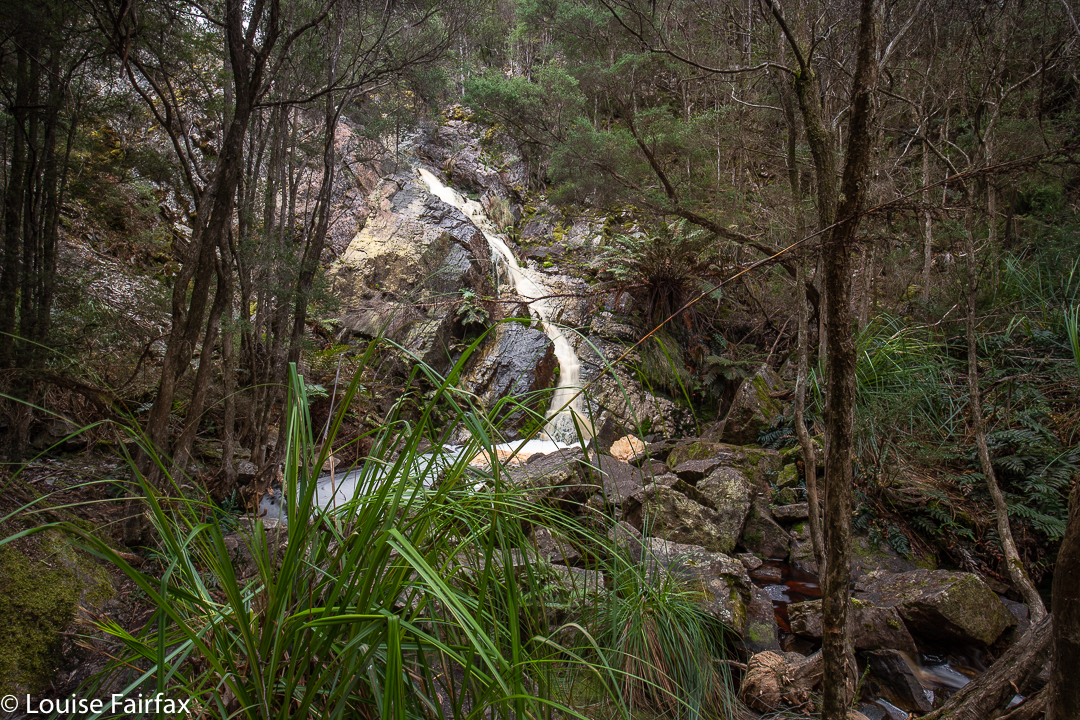 I’m afraid I have to confess that I have always regarded Doone Falls as a spoon of medicine I would have to swallow one day if I wanted to tick that box. I had seen a photo of it that did not inspire in the least, and, I have no idea why, but Sisters Beach did not have a siren call for me either. I guess I have never seen an alluring photo of it.

Today was a good sort of day to make my half-hearted pilgrimage to this doubtful mecca. It was a middling sort of day: cloudy but not raining. Not thrilling in any sort of way, but not bad enough to have me declare it a “sit by the window and read my (excellent) book” sort of day. I did my normal training run in the gorge, and took Tessie for her walk on the harbour before I set out, as you just didn’t know with a day like this how things would unfurl.

I know it’s churlish of me, but I didn’t like Sisters Beach in reality any more than in the anticipation. I drove slowly along the street, trying to get a glimpse of the beach, but I could not see it once. Not at all. Huge two-story houses (each with a gigantic boat on a trailer parked somewhere in the capacious yards) blocked every possibility of a sighting of the water. Eventually I reached the end, marked by one of the ugliest car parks ever, with not a tree in sight, and dumped my vehicle. Lucky for me, today was Australia’s religious fest day, so every Aussie except me was at church worshipping men in little shorts trying to get a ball to one or other end of an oval. No doubt they were having communion with beer for wine and chips for bread. This meant I had the carpark and the whole national park to myself. Wee.

The route was unexpectedly open. I thought it would consist of dry scrub like the bush near Greens Beach, but it was more open heathland. It would be glary and exposed (to sunburn) in summer, but today was fine enough. The wind was not too strong, and it all had a Wuthering Heights kind of feel as I climbed up Broadview Hill with views to lumps and bumps around me, and the beach below. As it was early spring, there were quite a lot of heath flowers and other dainty patches of colour making their appearance. The only shady part was the final five or so minutes which marked the descent through pleasing mossy forest to the creek.

32 minutes took me to the first turn off (shortly after Broadview Hill), which was signed to Doone Falls; 8 mins 30 more were needed to the next sign / intersection, which said the falls were 45 minutes return. I had been going just a shade over half the advertised times, so I figured 12 or 13 minutes should see me at my destination, and I was right. I was thus there in a bit over 50 minutes. The way back had similar splits. I am telling you this, as the fact that it was supposed to take two and a half hours had put me off a bit, and it is good to know that it is not quite such a big time commitment as anticipated, leaving room for other adventures, or just not making for such a long day if you’ve come from Launceston. For me, it meant I could also do Betts Falls and be home in time for dinner. Two boxes ticked. I very much doubt that I will ever be back.