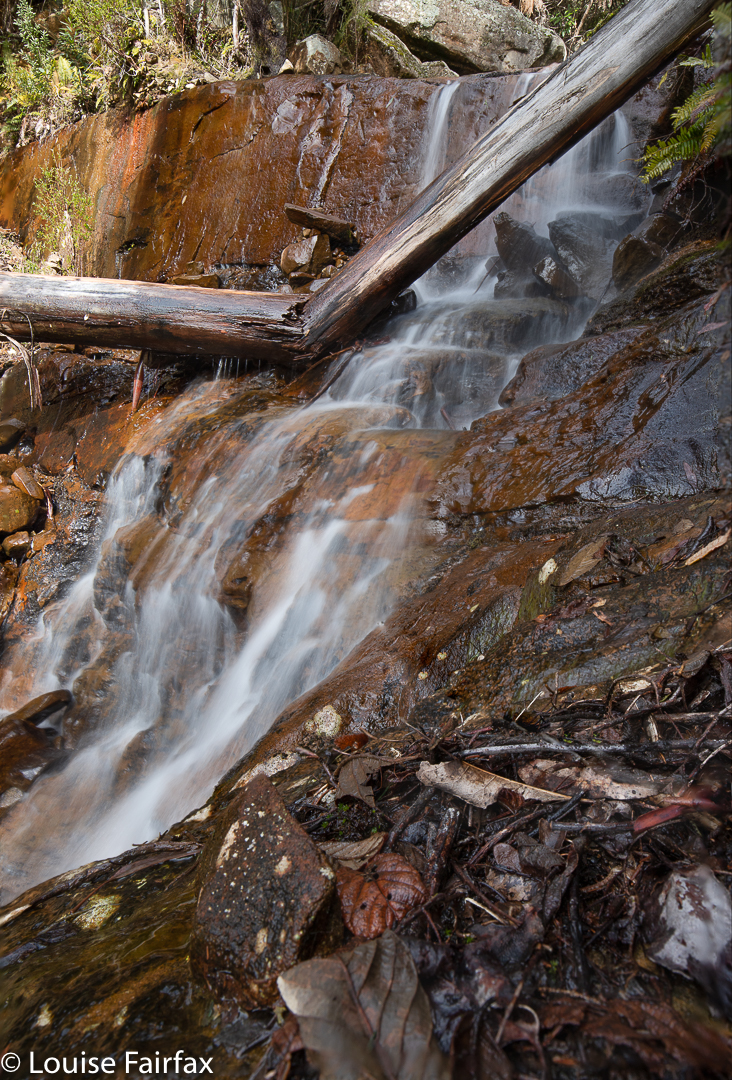 As I approached my waterfall (from above, actually), I gazed out at the facing ridge of what appeared to be loosely assembled scree that rose (or fell, if you will) in a sharp incline between the forest floor and the points of Ritters Crag above. I was reminded of a similar slope I had descended to reach Bear Falls on Mt Wellington, and with Bear Falls in mind, and my own rather foolhardy daring in being where I was on a solo battle with scrub and cliffs, I named my waterfall Dare Falls. It rhymed, and was appropriate. I had scaled nearly 400 vertical metres in a horizontal distance of not much more than a kilometre of untracked, and at times thick, bush. Surely not many people would dare that absurdity. (See the altitude graph below).

I had not set out to be daring. I have, unfortunately, little respect for contours, and enjoy the act of climbing, and of pulling myself up slopes. It’s my idea of fun. The excursion only became “daring” in my mind when the beautiful rainforest ceded to thick bush that resisted my attempts at progress, and became mentally tiring to push through. I had intended to begin my exploration of this watercourse higher up than I did, but the sight of all that interwoven scrub (taller than I was) made me reconsider. I reminded myself that I was here for FUN, not punishment, and not to prove anything to anyone, so decided that my outward journey had finished. I would descend to the creek and work my way down it.

My climb up had been more on the dull nose of a mini sub-spur and, although it was very steep – all fours territory – there were no big cliffs to avoid. Closer to the creek this was not the case, and the watercourse seemed host to a series of 4-5 metre cliffs which I had to skirt as I lowered myself down. These same cliffs meant the existence of many small falls, but you can’t photograph everything, and I just wanted to make sure I actually got out and safely. In fact, I was actually more concerned about the idea of being enmeshed in closely serried dogwoods than falling off anything, but I was concentrating on movement and not photography.

Down, down I dropped, past Dare Falls and Lower Dare Falls (how very original) to the endless series of drops mentioned above. I lacked the emotional energy to explore any of them by this stage. My brain was now officially tired. It was so fatigued I hardly photographed anything properly. The whole idea of perching precariously on one of my many ledges and parking my heavy rucksack in a way that would allow me to extract my tripod seemed impossible. Something would be overbalanced in the attempt. My gear (or I) would crash down below. Much better to use rocks as makeshift tripods. I didn’t even get out the filters I was carrying. I just used a series of 20 x 1/10 second exposures to combine for a single long exposure later. Even lower, where it became safer, I was just too mentally tired to be bothered – even in the presence of fungi!!

My final obstacle before the easy bit along the bottom was the same as my original one: a crossing of the Duncanson Rivulet. I hauled out anything electronic and made sure it was all in a drysac, grabbed a stick to help with balance and picked my way across the slippery rocks with water flowing over and between, singing as I went an old Seekers song (which dates back to a Scottish folksong of the 1600s): “The Water is Wide, I can’t cross o’er”.