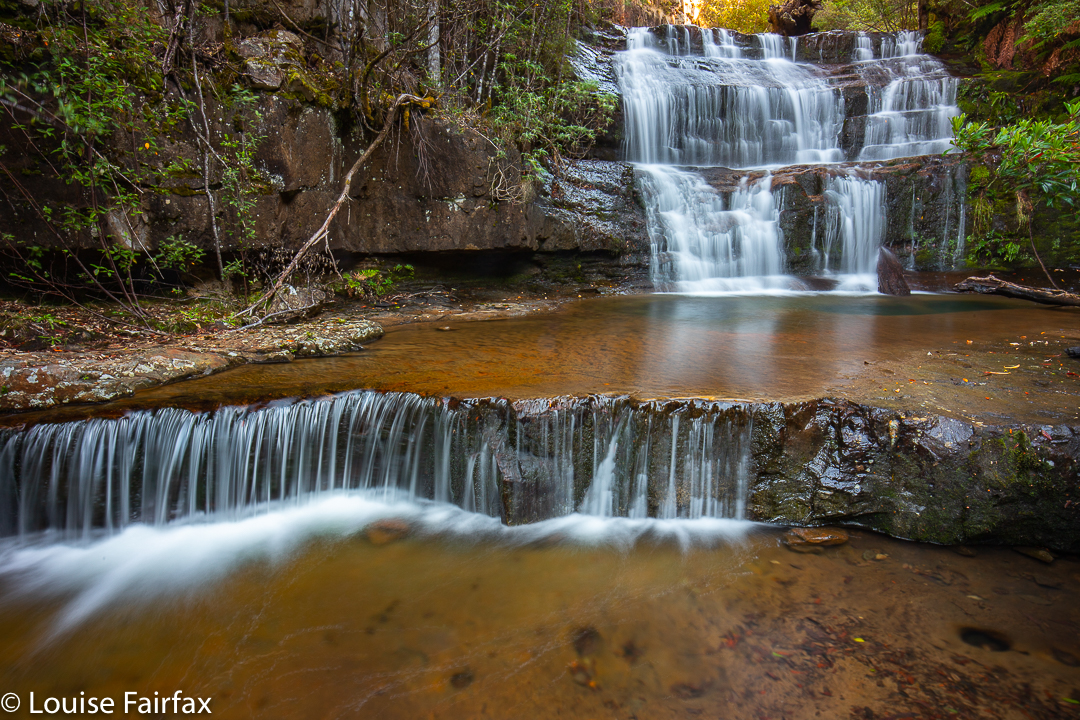 I had a free day in Hobart, and there had been good rain about a week ago, so, hopeful that water would still be flowing, I set out for the newly mapped and named Trestle Falls, lying not surprisingly on Trestle Creek, which flows down from Trestle Mountain.

When I looked at the map, I decided the best approach would be via the publess, shopless hamlet of Mountain River, and use the track called Mountain River Trail that emanates from the Mountain River Road terminus.

I have actually never used this trail, having only climbed Trestle Mountain using the Mt Connection track to its east. That track was wide and boring. This one was a narrow, green path which I greatly enjoyed. I used the track to gain height; the falls, however, do not lie on any tracks, and navigation and “bush bashing” (not much bashing went on) are needed to get there. There was certainly an amount of ducking, climbing and weaving. This is for experienced bush people. Using the track, I worked out from the shape of the land when I was on the same contour as the falls would be, and left its ease and headed into the bush on contour to reach the lowest of the falls.

The forest was not difficult to traverse, and was delightfully green. Even better, there was, oh joy, no ugly blasted pink tape to mar its beauty or kill the animals. Obviously, this waterfall was in the south, where the population seems to be less inclined to ruin every scrap of bush they can find. (I’m allowed to criticise the north, as that’s where I live. Are there any untaped waterfalls left up there? Don’t say which ones, or they’ll have plastic littering them by tomorrow.)

Anyway, this waterfall was a “choose your own route and adventure” one, a dying breed, and I loved it for that. I enjoyed the uncertainty of reaching my goal, which makes finding it so much more pleasurable.

I found four waterfalls that I considered to be worthy of setting up and photographing. You could call it more if you counted some of the “doubles”. I didn’t, so called it four. My bottom one, number 4, was lower than the one called Lower by Caedence, so I called it Lowest Trestle Falls. Then came Lower, my favourite. Middle was pretty nice and Upper, well, it was better protected than the others – ie, less accessible – and I’m not sure that the effort would justify a return visit. Definitely, for me, falls 2 and 3 won the beauty prizes. The top falls, that are where the falls are on the map, are certainly the tallest, but size isn’t everything in my books.

My route back was not a good one, as I was extravagant with the height gain out of the top falls, and had more obstacles to deal with at that height. Although it was downhill, and theoretically quicker, I took longer than on the climb up to reach the falls. My route in was 43 minutes from car to the bottom falls, the route out nearer to 50. The catch is that I spent 1 hr 15 covering maybe 200 ms between the top and bottom, due to massive amounts of photography. Even so, I was back in time for a late lunch, and full of joy at the lovely forest I had been immersed in. For me, to photograph beauty is to become united with it. I totally lose myself and merge with whatever it is I am photographing. It is a very liberating activity.