Wylds Craig  Feb 2012. My second ever off track mountain. 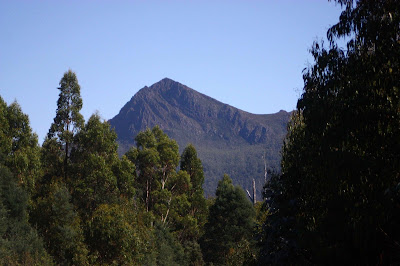 The day we chose to climb this mountain, it was hot – especially as we set out straight after lunch, but once we’d entered the lush coolness of the rainforest, the canopy and moisture kept us comfortable. I climbed alone with my husband who has Parkinson’s disease, as we were too scared to climb with a group in case he held people up. As it turned out, he climbed brilliantly, and we need not have bothered – but we didn’t know that before he did it. Later, people said we were crazy to climb in that heat, but really, we didn’t notice. It seemed to us that very soon after our departure we were crossing Goodwins Moore, the last section before the summit and our camping site. 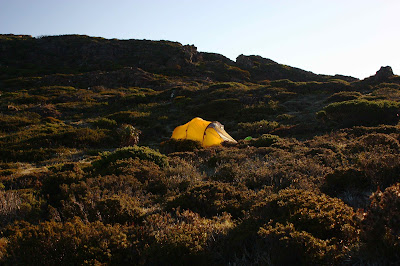 We arrived, chose a lovely spot in the pineapple grass with a magnificent view to pitch our trusty tent, and decided for an early ascent. The summit was only five minutes away, so I presumed we’d be climbing it a few times. I wanted photos taken now while the light was good, and then later in the golden rays of sunset when the others would have joined us. It was lovely to have the summit to ourselves, and then later to share it with the others. 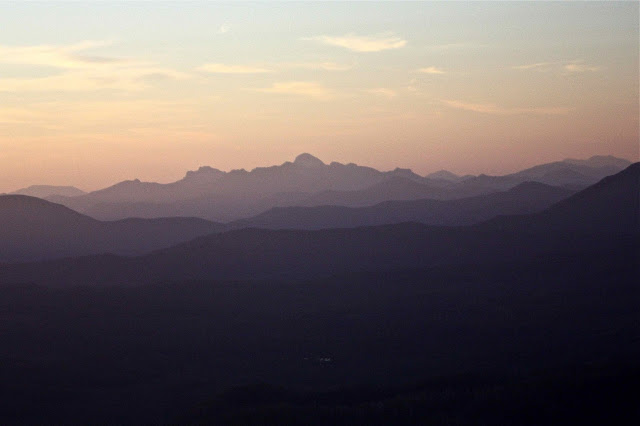 The only drawback to the site we’d chosen, and a point of mild concern, was that all the tarns had completely dried out in the late summer conditions of lots of sun, no rain and drying winds. We had absolutely no liquid: the last water we’d crossed was 50 mins ago. This would probably only be 25 or so on the way down, and 35-40 on the way back up as I wouldn’t be carrying my pack, but it would be a lot better if we could find a little tarn that hadn’t dried out. Hoorah. From our eyrie at the top we could see the sparkling glow of a tarn that was possibly only about ten minutes from our tent. Wonderful. I’d visit that when we got back down. It was the only visible water on the whole mountain. 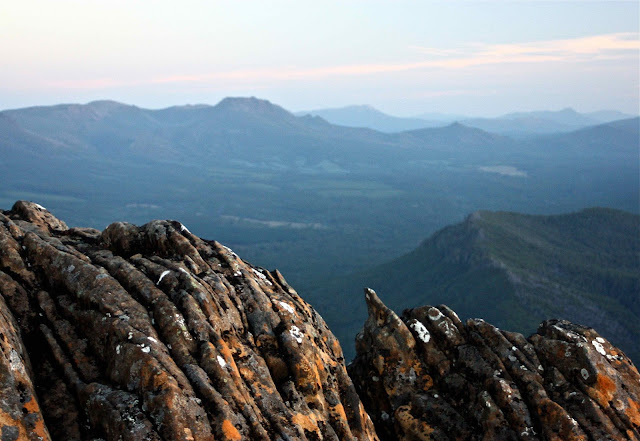 When we got back to the tent, I left B to relax and took as many containers as I could to fill them. The water was cool and clear, and I enjoyed washing myself down with its soothing moisture as well as drinking from its pure freshness. There was plenty of water there for everyone.
For the rest of the hours while we waited for the others, we lay in the soft grass outside our tent and read. How relaxing. Each time I was due to turn a page, I would survey the glory of the scene before me before continuing.

Eventually the others arrived. It was now 7 pm, and they were eager to get to the top to watch sunset, so we all set off – they without any dinner. We had eaten ours waiting; I did not envy them the presumed hunger. The view as the light faded and the sky turned roseate was stupendous. We all stayed there until there was almost no light left for the return descent; it was too lovely to leave. 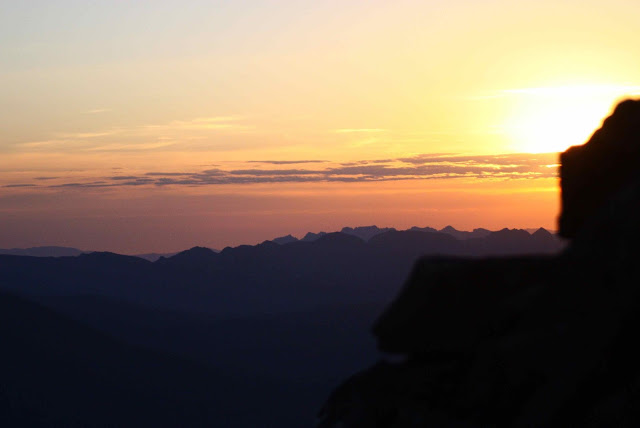 Next morning there was a fiery orange glow to the east with everything else a pitch-black silhouette as I emerged from the tent. We had set alarms to enable us to climb again and watch sunrise from the top before dropping to the tents for breakfast.

I took too long over breakfast, lingering in a relaxed dream over my porridge, coffee and biscuits. Before I knew it, the others were ready, tents down, packs on, but we had neither depitched nor packed. I did the fastest tent dropping job imaginable, threw B’s pack together, sent him off with the others, and began a more careful pack of what remained. I’d give chase as soon as I could. I sighed with relief as I saw from above that he’d caught them from behind, and concentrated on decamping as quickly as I could. I’d caught them before the first break. 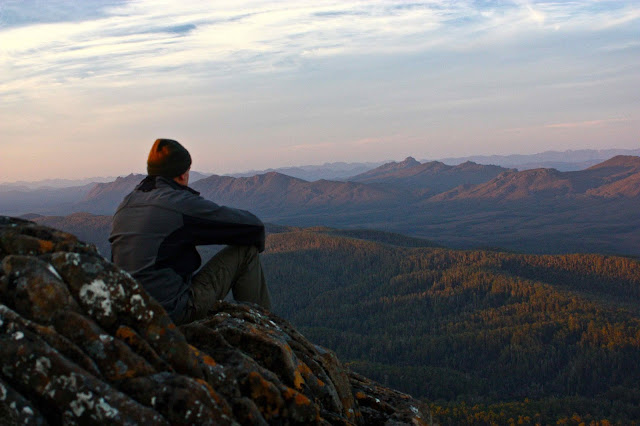 We descended and chatted, enjoyed the views and ate the goodies that people had brought to share. It was hot, so once we’d reached the car, the suggestion of a swim in the Florentine River was most welcome. The water was freezing – way too cold for me – but it was fun getting wet anyway, and enjoying the last of the rainforest before it was time to go back via the best pie shop ever at Hamilton.