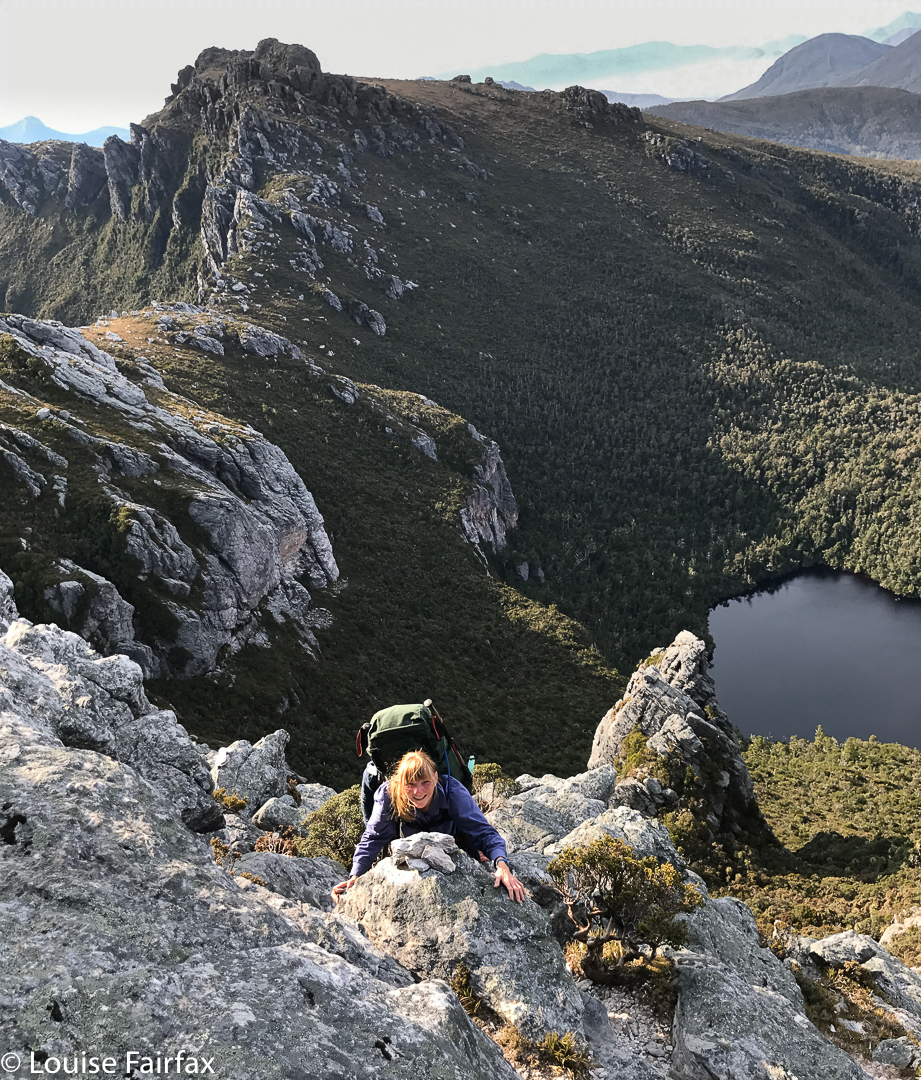 I have lost count of the number of times I have set out (or wanted to set out) to do the Western Arthurs Traverse, and been weathered out of my mission – by fires, floods, blizzards. You name it, the weather won each time. This time I fooled the weather by not acknowledging what I was doing. I pretended I was just going to play at the Eastern end of the Western Arthurs, and by the time this morphed into a traverse K-A, the weather hadn’t had time to work up its normal fury, like a snake you surprise so it doesn’t have time to summon up all its poison. Off I set. I couldn’t believe it was really happening. And I was so glad to be doing it the tougher K-A rather than the normal A-K. I like climbing.

The first day was merely a half day, and thus didn’t begin until after lunch, so we only had time to get as far as Two Mile Creek. This was actually great for me, as it’s been far too long since I’ve carried a Big Expedition pack, so it let me ease myself into the task. The next day, of course, brought in the absolutely massive task of climbing Kappa Moraine to the top (nearly) of Mt Scorpio (which we climbed, of course), before ascending some more out of Lake Sirona, and finally dropping to Hanging Lake, where platform space was scarce, and where it was yet again proven that wretched platforms and gorgeous Hilleberg tents are not good companions. My tent is not free standing, and needs more than the usual number of anchor points. Grr.

We began full Day 2 by going backwards, to climb Aldebaran, for me for a second time. As this is one of my very favourite mountains,  I don’t mind how many ascents I tally up. It was beautiful to reach the summit with the clouds still in the valleys below.

“Mt Taurus” does not look all that foreboding from Haven Lake, but climbing it was the most taxing part of the whole traverse for me. It seemed to go on forever, and I guess I hadn’t found my so-called second wind yet, so it felt formidable. I couldn’t wait to drop the packs and go touch the summit. I am confused, actually, as everyone calls what we climbed Mt Taurus, but Listmaps has the much more dramatically interesting, more “bullish” rock to the NE labelled Taurus. Is everyone quoting Chapman who got it wrong? Or has Listmaps got it wrong? I don’t know the answer.

After that, the Dragon Spine of four … or was it seven??? … bumps (one lost count after a while) was not too bad. And awaiting us were the famous Beggary Bumps with the bad-street cred’d Tilted Chasm which had to be negotiated before we reached the also-much-talked-about High Moor. For me, it was a dream to at last be seeing these wonders, having read so much about them, and seen so many pictures (mainly David Noble’s inspiring ones).

We climbed up a chasm that seemed pretty steep with loose sections, and I thought it was fine, but was starting to wonder about how bad the Chasm that everyone spoke about with fear in their voices was. I then got told I had just done it. I laughed with pleasure. The same happened with some sloping rock with small ledges that didn’t worry me in the slightest, but which one of our four was fearing. I was surprised to find that I’d just completed the dreaded object.

There was one moment in the day when I looked down and told myself that had been an idea less well-advised than most, but I just turned my attention to the task at hand and didn’t look down again until I had a bit more terra firma underfoot. Soon enough we were choosing our spots at High Moor. A group of ten camped there made life a bit tricky, as there was no space for my tent, but I managed.

That night, during the night, a mighty wind whipped up, ripping John’s tent along its top as it broke his pole. He and his gear were in a less than ideal state in the morning, which dawned wet, grey and windy. We spent this day catching up on the sleep we didn’t get during the night, and then climbing a few thises and thats. I had already climbed Columba the previous evening, but did it again to kill time, adding in a few other lumps and bumps to keep myself amused.

The next day’s walking took us out of High Moor, up Capricorn (packs dumped to summit), up the much harder Mt Pegasus, which I had already climbed from Cygnus with just a daypack. Climbing it with a full pack was somewhat more strenuous, to say the least. The views from the top remain fantastic. This day was pretty hot, which was rather welcome, but even more welcome was the little nameless tarn between Pegasus and Oberon, where we stopped to dip our faces in the water to cool down and drink.

The next stop after that was at the outlet to Square Lake, where we took out about half an hour to rest up before the final slog to Lake Cygnus. High Moor to Cygnus was a pretty long day. That evening, the air was balmy, and it was so nice to sit outside and chat and enjoy the temperature. I went along to say “Hi” to the only other people at the lake, and discovered it was Ben the Skier, whom I had met the night before he did his amazing ski down the chute of the Ducane Range the month before. Small world. (At High Moor, a guy had come in and pitched next to me late in the evening: we worked out I had given him a lift just two weeks before as he headed in to the King William Range while I was bound for my Rufus waterfall adventure.)

The final day turned on mist and howling winds for us. It took round about an hour to reach the top of Morain A. In this time I was blown off the track every third step, and was absolutely exhausted from trying to stabilise myself in the presence of forces so much more powerful than I was. My core even started to cramp due to the hard work. It was a blessed relief to get out of the main wrath as we descended, and begin the easy part of the trip to Junction Creek and out.

This traverse will remain in my mind as a highlight, if not THE highlight of my bushwalking “career”. It was not as remote or ‘different’ as many of the extended walks I have done, but I adore a physical challenge and this trip offers that in extremis. I felt like I was in the most dramatically beautiful fun park I have ever entered.