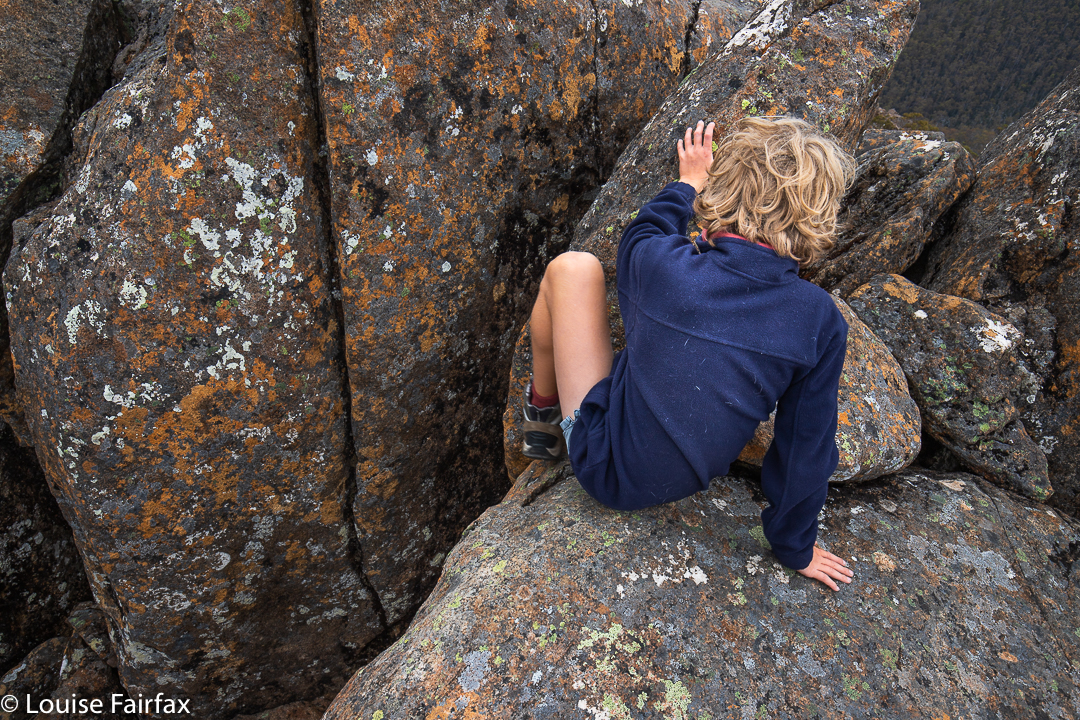 We were faced with a quandary on the final day of our short holiday at Mt Field National Park, as we were there with a four and an eight year old, and had already been to the three well-known waterfalls (Russell, Horseshoe and Lady Barron) the day before. On this day, we only had a pitiably short amount of time, and we wanted to go high. We decided to go as far as we could along the Mt Field East path, and just turn around after forty-five minutes. However, after a time that was not very long, and well before we needed to turn around, we reached the turn-off to Seagers Lookout, and decided it would be our destination. Little Abby was coping much better than the previous day, enjoying the challenge of this rocky path where you had to think before you put your foot down, and where you could play jumping and bouncing games while you went.

Gussy and I played other games on rocks, climbing this and that while we waited for Abby. Luckily, our turn-around time came just as we rounded the corner that promised our goal. We figured we’d wasted a lot of time balancing on the dam wall at Lake Fenton, so weren’t too worried. Abby and her mum settled down to enjoy the obligatory lollies that one has when one reaches one’s goal bushwalking, while Gussy and I climbed the rocks to touch the summit cairn.

I have seen in the web that this is called an easy walk. Perhaps the writer is a 6 ft tall male aged maybe 20. If you are an eight year old boy, this is NOT an easy climb. I showed Gussy how to use pressure on each side of the chimney to work his way up it. I was delighted to hear him grunt with effort, as I respect anyone who is prepared to work for his or her goals. Laziness annoys me. Gussy concentrated hard, and was thrilled to rise to the challenge of the rocks and take the final couple of easy steps to the cairn.

I realised that coming down would be harder for him, so once more went first, and found it challenging myself until my right foot found a ledge it could use. Somehow it was hard to get into a position where one could prevent falling by pressing on each side. Gussy’s mum heard that I was needing to help him more, as this was the most challenging descent he has ever done, so came around to help coach him. I hope he doesn’t mind my saying here, but I could tell he was afraid, so I am very proud that he didn’t freeze, but pushed through his fear, trusted our instructions, and managed to climb down. In case you have children and want to do this walk, it is a totally delightful walk without touching the actual cairn. That is just icing on the cake. Abby doesn’t feel she’s missed out on anything (especially as she used the time to imbibe more lollies than her brother).

Kirsten touched the summit herself, and then it was time to start back down, with a need now for great haste; we were rushing, as Gussy had been invited to play tennis (hot shot tennis) on centre court at the Hobart International before the semi-finals started. We were terribly proud of him for being thus selected, and certainly did not want him to arrive late. I am happy to announce that he also did not arrive maimed from his climb. When Abby’s pace threatened our timetable, Kirsten popped her on her back, and virtually jogged down the mountain with her on board. I stopped to put something in my pack, and had to run to catch up.

With its mild challenges, its variety of natural amusements for children, and its perfect length, I highly recommend this as a walk for families. As said, touching the actual cairn is not obligatory to enjoyment.

The previous day, Abby had been far more fractious, as the wide, smooth paths offered little variety or interest for young children. We had had a tantrum or two (or more) on the way to Lady Barron Falls. Abby survived Lady Barron by joining Gussy in a game of Ned Kelly, hiding under bridges or behind trees to shout “Boo” at us as we went by. The other two falls were enjoyed not so much for their water falling, but for the opportunity I gave them to get off the predictable track and into the real forest, which gave them scope to use their imagination and test their little muscles. I watched them play, thrilled that they were interacting with nature rather than being in a plastic playground.
On this little holiday, we saw my first ever bandicoot up close (1 m), a quoll (which seems to be rare these days), bats, glow worms, a very close and obliging echidna, and many paddymelons. We tried for a platypus, but failed.