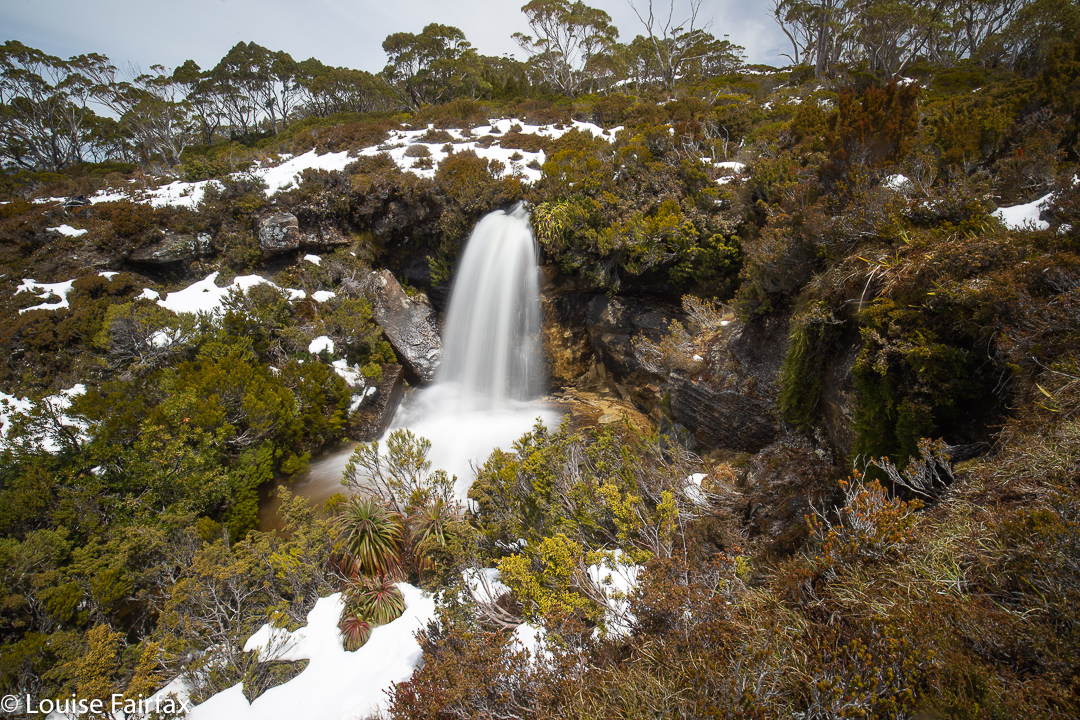 Off I set: my goal being mysterious blue lines on the map, lying on the flanks of Mt Rufus, on tributaries that would eventually flow into mighty rivers. Now, when you set out bushbashing in quest of a blue line on a map, you have no idea (i) whether there will actually be a waterfall at the end of your rainbow, and (ii), whether it will have been worth the effort in time, energy, petrol and scratches. Thus I have (in the past) been the questionably proud discoverer of Dry Falls and Trickle Falls, to name but two of my findings. Funnily, no one has been very excited about these, even though my documentation has, at the very least, told them what’s there and informed them that it’s probably not worth their while adding that to their list of immediately pressing activities.

HOWEVER, Sunday’s journey through knee-deep mud and then thigh-deep snow with shoulder-high scoparia thrown in – and a few magic, primaeval pencil-pine grovelets with brief sections of alpine grass – (plus one tiger snake), a journey that took seven and a quarter hours in total, was absolutely Worth The Effort. I could have called the falls Wonder Falls, Speechless Falls, Gaze or Delight Falls; however, even these names diminish them somehow, reducing the spiritual experience of being there to one aspect of the experience.

They need a name that will impart a sense of their particular place set in wilderness, a name that reaches out not in, and I think an aboriginal name is what they deserve, as it will add its own mystique, just as does the name Leeawuleena, lying not far away, “sleeping waters” … how beautiful. I have wasted hours trawling the web for a Tasmanian aboriginal dictionary, or for place names that could be vaguely related to the area, but my net remains empty. For now, English monikers will have to do: Rufus Falls, and Navarre Falls Upper and Lower. Although Rufus was a Roman poet of antiquity, whose poems none of us have heard of, and whose only claim to fame was that he was a friend of Virgil (is that not clutching at straws???), at least the name “Rufus” suggests to us Taswegians an area of wilderness with a certain feel to it. And Navarre is a former kingdom of SW Europe, established in the 9th century by the Basques. What has that got to do with us??????

Up there near the waterfalls, the views are expansive, looking out at Mt Gell, King William I, Pitt and Mulligan, and then Slatters Peak, and the King William Range, with Frenchmans Cap thrown in, and that’s before I begin to name the ones further to the south. On this day, all were decked in snow. For me, all these are old friends and I love seeing them. Gleaming and sparkling in the distance far below us was Lake King William.

It was not a fluke that this journey was undertaken with white peaks all around, and snow covering the route. I had been watching the weather maps very carefully, and chose accordingly. This was exactly what I had ordered, and I revelled in it.

I had brought along a friend who, I knew, would appreciate being there. She had never been in real wilderness before, and was floating with delight. We giggled our way through the snow drifts, which are actually quite hard work, forcing you to lift your legs very high each step, after which you’d sink to an unknown depth, depending on what lay underneath. And then, I kind of squealed with delight, for there was a real waterfall, and it was beautiful: an attractive drop of maybe ten metres of delicate white, attended by deep clumps of pristine snow, pandanis (richea pandanifolia), with a few pencil pines, and Pherosphaera hookeriana for colour, texture and form variety. It was set in a small sandstone, cliffy amphitheatre, with striations of warm hues. We photographed from the west and the east, from above, the side and below. It was fun.

Even so, I thought that my friend, unaccustomed to all I was doing, might have had enough, or been very tired by the physical effort of getting there, so I offered her the choice of turning around at this stage. To my excitement, she said she’d like to see the other two falls I had in mind. I pointed to where I expected them to lie, gave her a pessimistic time estimation and reminded her that there might nothing there (I hate overly positive promises; I would never make a politician), but still she agreed. Yippee. Off we set.

On this section, the snow was more of a challenge, with some very steep drops, and drifts of unknown depth to contend with. However, the final spur was sheer pleasure. Again I sort of squealed with shock and delight when I looked over the edge and saw what we had found. And just below, the water dropped yet again to another hidden treasure. Meanwhile, the cliffs on the way, and in the region of these falls, were marvellous in their own right. We were in heaven. We angled around to the side to inspect and photograph both, and then climbed back up for a snack beside the river and a relax, imbibing mountains, lakes and beauty, before beginning our reluctant journey homewards. Just to show off, I sent friends pictures of the frozen tarn where we also spent some time. Most of Australia is on fire at present. How amazing and fortunate to be in the snow!

My friend’s shoes were sopping, and her feet numb, parts of her were no doubt scratched, but still she was in love with being in the wilderness. Both of us felt our souls had been expanded and nurtured by being in this place.
If you think you know how to get these falls, will you kindly respect people who love their wilderness wild, and leave no plastic tape and no cairns. Let others feel the total freedom we felt in this place.

3 Replies to “Rufus and Navarre Falls”